Kinshasa 1883 - Creation of a Trading Center

In March 1882, a year after the founding of Leopoldville, Stanley began negotiation with Chief Ntsuvila (Ngobila) for a second station on the Pool at Nshasa. During Stanley’s absence upriver, Capt. Hanssens negotiated a treaty for the land, but the Chiefs were distracted by events on the northern side of the Pool and the intentions of the French. Subsequent attempts to negotiate an agreement were frustrated.  While on a trip from Leopoldville to Kinshasa to meet the Chiefs on December 23, 1882, Cdt. Kalina drowned, the first expatriate to die. Finally, in April 1883, agreement was reached between Stanley and Ntsuvila to build a station.  VanGele started the work near the current Brazzaville ferry landing (Beach Ngobila), but the locals resisted, leading Stanley to nominate his English colleague, Swinburne, to the post.  In July, Stanley visited the post and was satisfied with the “belle petite station”.
﻿


When Stanley returned from an up-river trip in January 1884, he found Swinburne’s station under the baobabs nearly complete. But in April, the French explorer, deBrazza, returned to the north bank of the pool and sought to assert his influence, sending French agents to build huts at Kinshasa, which was closer to the French post across the river than was Leopoldville.  The French claim was based on deBrazza’s treaty in October 1880 with Makoko, the Paramount Chief of the Bateke, which inhabited both sides of the Pool.  However, Stanley had also signed a treaty with Makoko and when deBrazza tried to raise the French flag at Kinshasa, Ntsuvila drove him off.


An American Commercial Agent, W.P. Tisdel passed through the region in March 1885, and observed that Kinshasa would make a better capital than Leopoldville, adding that Stanley’s steamers barely had enough power to negotiate the swift current at Kalina Point.  E.H. Taunt, another U.S. Commercial Agent, reached the Pool from the coast in June, and visited Kinshasa while awaiting passage up-river on the American Baptist steamer the “Henry Reed”.   In September 1885, Anton Greshoff arrived to set up a trading post for the Dutch Nieuwe Afrikaanse Handelsvereniging (NAHV), on the river bank where the Marsavco factory is today. Congo Free State officials actually encouraged other nations to set up trading factories, consistent with the terms of the Berlin Agreement.  Taunt returned to the Pool in June 1886 for the Sanford Exploring Expedition, an American firm with close ties to King Leopold, and established his base at Kinshasa.  Sanford ordered 4 small steamers to trade on the upper river.


In July 1887, Alexandre Delcommune, a Belgian who had welcomed Stanley to Boma in 1877, reached the pool on behalf of Albert Thys’ Compagnie du Congo pour le Commerce et l'Industrie (CCCI) which was planning to build a railway from Matadi. Delcommune was organizing transport of the steamer, “Roi des Belges”, brought up the Caravan Road in pieces on the backs of porters.  The survey of the railway was completed in November 1888.  The following month, CCCI created the Societe Anonyme Belge pour le Commerce du Haut Congo (SAB), which opened a trading house at Kinshasa, taking over the Sanford Expedition’s assets as well.  At the beginning of August 1890, a young Pole named Jozef Teodor Konrad Korzeniouski arrived at Stanley Pool to become the captain of the “Roi des Belges”.  He was received by SAB’s Assistant Director, Camille Delcommune, Alexandre’s brother.  When as Joseph Conrad, he wrote “Heart of Darkness”, Delcommune was most likely the model  for the  “General Manager”.


The (British) Baptist Missionary Society (BMS) bought land from Chief Ntsuvila, just downstream from Greshoff’s Dutch House in August 1888, relocating from Leopoldville after a grass fire burned down their original station.   Rev. Grenfell’s “Peace” was in frequent use by missionaries, traders and State agents.   In 1890, BMS erected two prefab wood and steel houses for its staff, ordered from Frodingham Iron and Steel.
﻿
The colonial army, the Force Publique, decided to build a camp at Kinshasa in 1891.  Lt. E. Richard was charged with building the camp, and he cleared the land by dynamiting several baobabs along the west end of contemporary Ave. Aviateurs to create Ave. Militaire.  About this time, Chief Ngaliema became irritated by the pressure of urbanization on Kintambo near Leopoldville and moved across the river to Brazzaville.  Other Bateke chiefs followed him or moved away from the Belgian settlements.  NAHV also moved its base from Kinshasa to Brazzaville at this time. 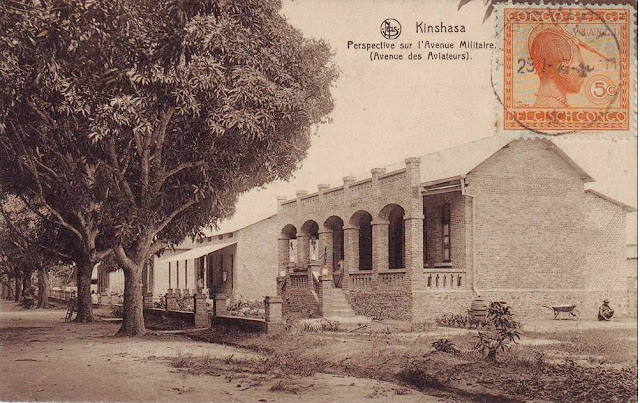 In March 1895, Edward Glave returned to the town from Coquilhatville and service in the eastern part of the colony.  An early member of Stanley’s contingent in 1883, he’d joined the Sanford Expedition in 1887. He found the place “much changed, more buildings and plenty of whites.  He stayed at Kinshasa, found a batch of letters waiting for him and continued on to Matadi with 11 porters hired from Dr. Sims.

The railway from Matadi was approaching the Pool in late 1896. District Commissioner Costermans assigned Engineer Dumont to design a port at Ndolo, just upstream from Kinshasa, which would become the terminus of the railroad.  The site was not ideal, it was rocky and needed dredging, but it was 12 kilometers from the rapids where the port of Leopoldville was located.  By the end of January 1898, engineers had completed the rail-bed to Ndolo and with completion of the line only two months away, observers noted it odd that only the Belgika company had obtained a building lot.  The arrival of the railway in March was greeted with much pomp and ceremony.  Governor General Fuchs officiated, a banquet was held for 133 people, while the guests were lodged on the steamer “Brabant”, the newest of the river fleet.   Passing reference would have been made to the more than 1800 Congolese who died building the railway (See Jan. 9, 2011).  At this time there were 29 Europeans in Kinshasa compared with 96 in Leopoldville. 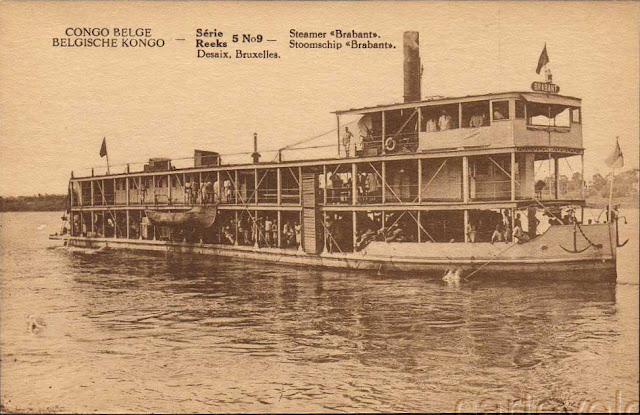 CITAS (Compagnie Industriel et de Transports au Stanley Pool) took over the SAB and Belgika holdings in 1899. By 1907 CITAS, SAB and NAHV were the largest private shippers.  The port area was linked to the railway line by spurs from Ndolo along the road that ran parallel to the port, Ave. Baobab (now Wagenia).  Another road led to the railway station (H.Regina). But visitors characterized Kinshasa as “sleepy” compared to busy Leopoldville.  But, when the steamer “Shagerstrom” went over the rapids in 1908, it bolstered the argument for moving the public port to Kinshasa.
The Catholic mission at Leopoldville began a mud and thatch house for Congolese catechists at the newly-established Ste. Anne Parish in January 1903 and Father Cambier, the church’s legal representative obtained 4 hectares of  land there under a free 12-year lease the following April. The missionaries obtained land for a permanent residence at Ste. Anne in 1908 and the first chapel built of durable materials.  Protestant missionaries began organizing annual Missionary Conferences, and the second held in January 1904. 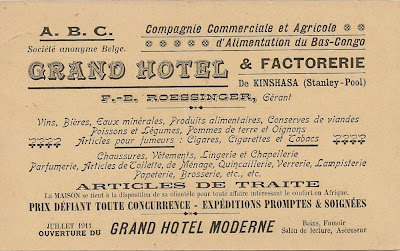 Kinshasa’s commercial infrastructure began to expand in line with increasing traffic at the port.  The first Post Office was opened at the end of 1908.  In August 1910, the Banque du Congo Belge (BCB) opened an office.  Founded the previous year, this private bank (now Banque Commerciale du Congo) also functioned as the currency-emitting agency until the creation of the Banque Centrale du Congo Belge et Ruanda Urundi in 1951.  The Bank transferred its headquarters from Matadi to Kinshasa in 1914.  In 1910, as well, the Alimentation du Bas Congo (ABC) was formed to acquire property in Boma and Kinshasa for commercial and hotel operations.  An advertisement announced the hotel’s opening July 1911, but photos from 1912 and 1913 show the 4-story, prefabricated steel structure still under construction, and it finally opened in 1914 across from the BCB’s Mediterranean-style stucco building. 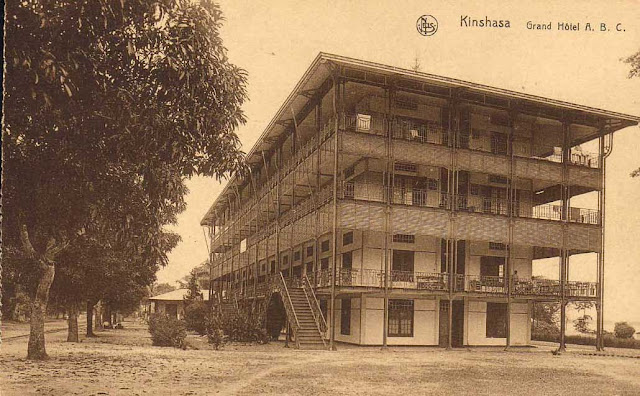 Another commercial enterprise arrived on the scene in 1911, the Huileries du Congo Belge (HCB), created in February by Lever Brothers of UK.  Lord Leverhulme’s representatives selected a 1 acre plot on 100 meters of riverfront in March on which to build the palm oil refinery.  Lever visited new operation in Kinshasa in November 1912 and also paid a visit to his countrymen at the BMS mission.  The following year, Lever bought the adjacent NAHV site and created SEDEC to buy and sell palm oil.  In April 1914 Lever gave BMS £.1000 for the chapel the mission was building, a gift which appears to be linked to HCB’s purchase of a large portion of BMS’ land.  The £.8,500 deal also gave BMS access to HCB’s steamers, which obviated the need for the Mission’s steamer “Peace”, which had been decommissioned in 1908.  When the BMS chapel was inaugurated in August 1915, Lever’s Director, Beissel, officiated.  This event no doubt prompted the Catholic missionaries to hold mass in the incomplete Ste. Anne Church.
The colonial government’s decision in 1910 to construct a new port in Kinshasa contributed to the trading center’s growth.  District Commissioner Moulaert prepared a plan for 500 meters of quays, upstream from the Lever factory, where the coffee plant and the Customs house were located.  In 1912, the banks and riverbed offshore were surveyed.  The following year, the Ministry of the Colonies accepted the plan for the port, with a 62 meter steel pier and 2000 square meters of warehouse space.  Curiously, in March 1914, the Ministry decided not to accept bids received for construction of the new pier.  Lever had commissioned a British engineering firm to study a series of  locks and canals around the rapids separating Kinshasa from Matadi and it may have seemed inopportune to develop Kinshasa’s port as a major transshipment point.  However, by 1916 plans for the port were complete, although construction was deferred until the end of WWI.  At the beginning of the 1920s, as Commissioner Ruwet made plans to move the port from Leopoldville, future expansion was expected to move upstream from Pointe de la Douane towards Ndolo.
Kinshasa was designated the headquarters of Kinshasa Territoire in Moyen-Congo District in April 1914 (Leopoldville being the capital of the District).  Despite Commissioner Moulaert’s urging, the Colonial Government decided in July of that year not to transfer the colonial capital from Boma. A wireless station was opened in March 1914 (the telegraph line had reached Kinshasa at the beginning of 1911).  At the end of the year, James Chapin, an ornithologist on a scientific expedition for the American Museum of Natural History, returned to Kinshasa from nearly five years upcountry.  He found Kinshasa to be “now a large town with hotels, a bank, stores, steamboats, and a European barber”.  He visited Compagnie Mbila (HCB) and noted that Leopoldville showed slight signs of growth.
In 1919, a territorial reorganization created Congo-Kasai Province under a Vice-Governor, with Leopoldville as the capital.  Kinshasa became the capital of Moyen-Congo District, further contributing to the marginalization of Leopoldville in local politics and economy.  By 1920, an urban district for Leopoldville and Kinshasa was created.  The two were linked by a good road, but Kinshasa was growing at a rate to become the most important town in Congo.  The Syndicat de Kinshasa (Synkin) was studying a scheme for distribution of potable water.