Fifty years ago, on May 20, 1967, President Mobutu announced the publication of the Manifeste de la Nsele, the conceptual document which created the Mouvement Populaire de la Revolution (MPR), the unique political party which dominated the Congo-Zairian political scene for the next three decades.  Mobutu’s collaborators in the effort were Justin Bomboko, Etienne Tshisekedi and Singa Udjuu.  Few would have heard of Nsele, an area 40 kilometers east of Kinshasa named for the river that flows into the Congo River there. Then part of the Zone Suburbain in the unincorporated part of Kinshasa, Mobutu had been busy at Nsele since taking power by coup d’etat in November 1965.
In April 1966, Chinese agronomists from Taiwan arrived in Congo to begin developing the agricultural potential of the floodplain along the Congo River, particularly the cultivation of rice, but pineapples as well.  Later that year, the Domaine Présidentiel de la Nsele was created and it was there that the President and his collaborators drafted the Manifeste. The area officially became a Commune January 20, 1968, claiming Ndjili International Airport within its boundaries, but which nonetheless remained under the control of Ndjili Commune until 1982 (See Jan. 27, 2014). In 1968, the Domaine Agro-Industriel Présidentiel de la Nsele (DAIPN) was established, expanding the Mission Agricole Chinoise program and launching an industrial processing and canning operation.
Mobutu had big plans for Nsele to become the political nerve center of the country.  In October 1969, he ordered building a Cité du Parti, a residential conference center to accommodate the conclaves of the MPR.  He wanted it ready for the May 20, 1970 Party congress, and soon five major construction firms were at work, building residential blocks, conference facilities, a restaurant and an Olympic size pool (See May 7, 2011). In April 1970, a four-lane, 26-kilometer extension of Boulevard Lumumba (Route Nationale 1) beyond Ndjili Airport was built to service the Nsele conference site.  The completed MPR Cité comprised over 20 buildings, surmounted by a 60-meter monument to the Party.
Around 1970, Chinese architects provided by the Taiwanese cooperation program were called upon to construct an imposing pagoda on the ridge above the farm.  This was to be a personal retreat for the President, in addition to his luxurious official residence at the Cité du Parti complex down by the River.  A dual lane roadway connected the two complexes through Versailles-inspired gardens.  After Mobutu’s visit to the People’s Republic of China in January 1973, however, the Taiwanese agronomists were replaced by Communist technicians.
Over the years, the Nsele Pagoda served as a venue for receiving state visitors and became one of Mobutu’s favorite residences.  The Ali-Foreman entourage lodged and trained at the Cité du Parti in September 1974 (See June 4, 2016), and while I have not found any photos of the boxers at the pagoda, it is likely there was a reception there at some point.
The mid-70s were the high-water mark of the Mobutu regime, both politically and economically.  But the dictatorial, kleptocratic regime was unable to maintain the popular enthusiasm promised by the coup that interrupted the political chaos and conflict of the early ‘60s.  The 1980s saw worsening economic conditions and little change in the political equation. Under increasing pressure, Mobutu held a press conference in the Chinese garden on April 24, 1990, announcing that multi-party politics would be permitted (See video link). Mobutu may have envisaged a two-party structure on the American model with the MPR facing off the UDPS (created by Tshisekedi and 12 other disenchanted Parliamentarians in 1980), but within months’ dozens of parties had registered.  Mobutu sought to manage the clamor for democracy, but already bad economic conditions worsened and in September 1991, wholesale looting called the “Pillage” (most likely fomented at Mobutu’s behest) swept the city, and the pagoda, into the maelstrom.  The ailing President retired to his other residences, often at his home village of Gbadolite, which was also had its share of pagodas.  Rebel forces led by Laurent Kabila captured Kinshasa in May 1997, bringing closure to Mobutu, the Manifeste and the MPR.  Initially, rebel fighters squatted in the shell of the building, but were eventually removed.
A recent visit to the pagoda found a couple soldiers guarding the place.  They said there were plans to rehabilitate the complex, and there was evidence that someone had cleared the brush leading up from the highway.  The preservationist in me would like to see it restored, but for what purpose?  Another hideaway for the elite?  It is unlikely to happen, but it could be left as is as a museum to the excesses of personal rule.  Cambodia bases its tourism economy on visitors to its ruins. Japanese colonial palaces in Seoul have been repurposed as zoos, museums, and exhibition grounds and many royal palaces around the world are now museums. One of Haile Selassie’s palaces is a campus of Addis Abba University. How about turning the pagoda into the library of a new agriculture university housed in the Cité du Parti?  The three levels of the tower would make spectacular reading rooms and the dumbwaiter that raised Mobutu’s favorite pink champagne could be refurbished to deliver books to the scholars.  The flanking wings could house the library collection and administrative services, while the Chinese garden could provide venues for academic engagement or solitary reflection.   The surrounding farm plots would provide excellent practical experience for the budding agronomists and agribusiness specialists.  I would go back for that. 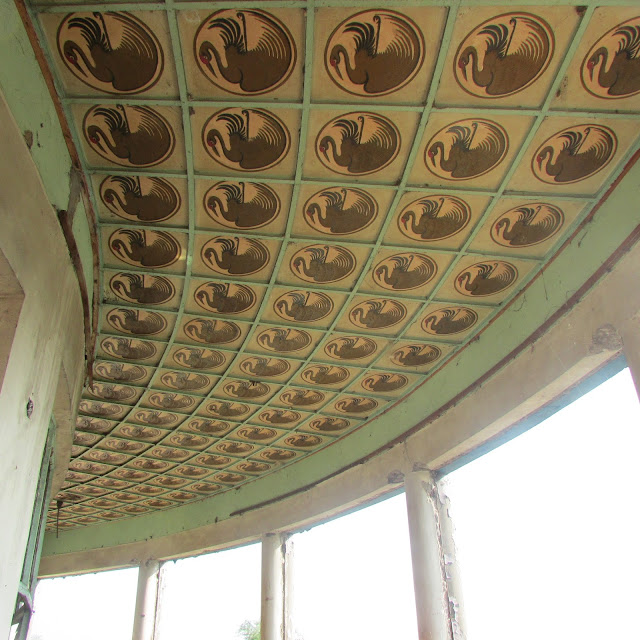 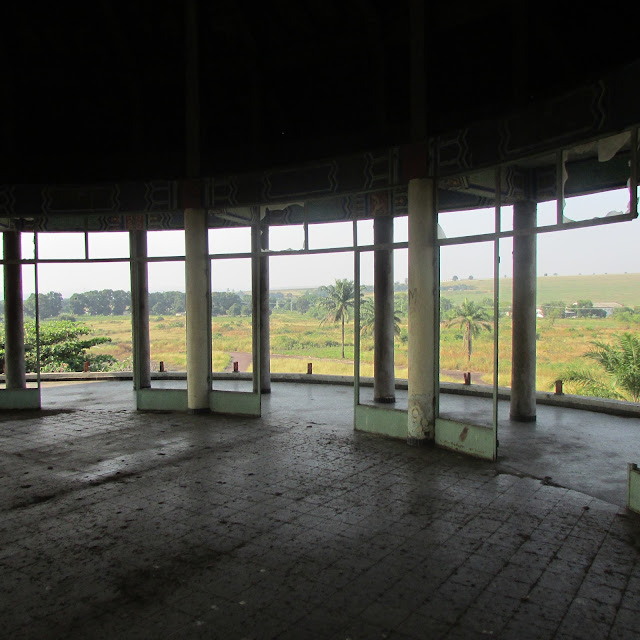