Leopoldville 1924 - Party at the Café Central

In an earlier post on Kinshasa’s lost architectural heritage in March 2011, I shared a photo of the Café Central (See Mar. 24, 2011), suggesting it could have been on Ave. Stanley (now Ave. du Bas-Congo in old Kinshasa, Commune de la Gombe).  I have still not been able to locate the Café, but will exercise the blogger’s prerogative and depart from my usual effort be authoritative into the speculative.
The earliest reference to the Café Central, owned by Victor Dorginaux, is a post card dated July 1, 1924, which shows the premises decked out with paper garlands and Chinese lanterns and tables set up in front beer-garden style.  July 1st was the anniversary of the founding of the Congo Free State in 1885 and remained a holiday even after Belgium took over the colony from Leopold II in 1908.  That same year in September, Dorignaux offered a self-named winners Cup for the European football league playoffs (See Nov. 1, 2014).
The Café Central likely pre-dated 1924, as an earlier photo exists without the “V. Dorginaux” sign on the roof or the mounted flagpoles. Dorignaux was probably involved, however, even if not the proprietor, as a banner on an adjacent shed proclaims, “Friture Victor”. 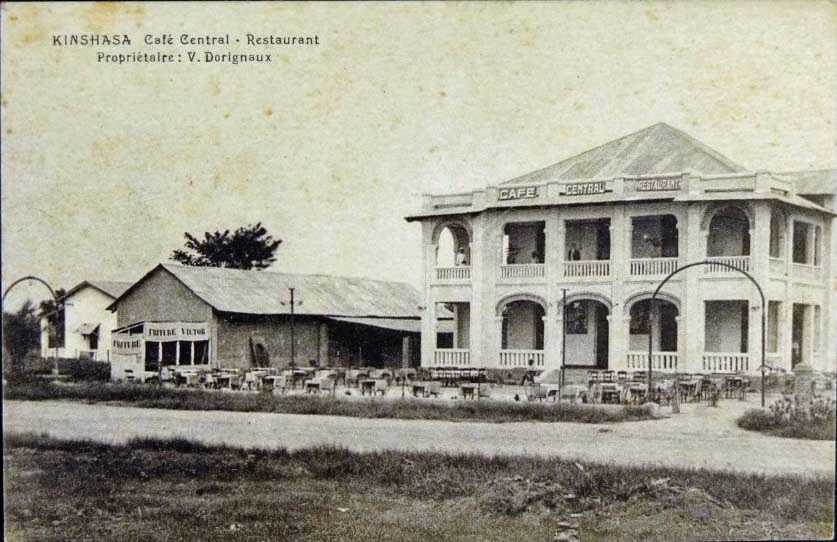 A later photo shows the “Friture” building with a new façade of the “Garage Central”.  There is scaffolding on the main building and the "V. Dorignaux" sign has been erected, a low masonry wall now separates the beer garden from the street and young trees have been planted at the corners of the lot. 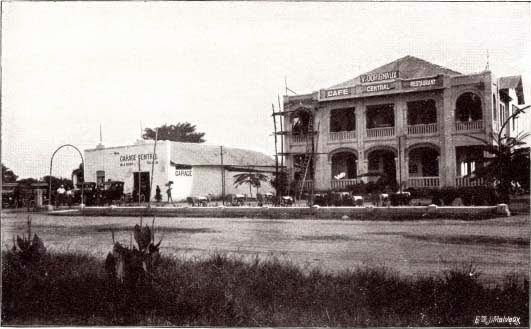 The décor and ambiance of the café and restaurant appear intended to provide customers with a respite from daily life in a tropical river port with the comforts of a European club.  The dark, interior bar appointed with heavy wooden furniture was called the “Bar Américain”.
The last record of the Café Central I have found is in the 1927 “Congo: Revue General”, in which the establishment is listed as a “Grand café-restaurant & dancing”.  Other photos with more lush and filled out vegetation match the photo at the beginning of this post.  Large potted tropical plants now stand on the verandah wall.
I have revised my hunch on the location of the Café Central.  It would have made sense to be closer to the old Gare and the Hotel A.B.C. (See Mar. 27, 2011) and the architecture resembles other buildings north of the railway line (now Blvd du 30e Juin) built in the 1920s, such as the Gremio Portugalia or the Unatra headquarters on Ave. Rubbens, for example (See Nov. 1, 2014, Feb. 2, 2012).  But after looking over several aerial photos of downtown of the inter-war years, I am unable to identify any building that fits the Café’s silhouette.  For now, it will have to remain an enigma.