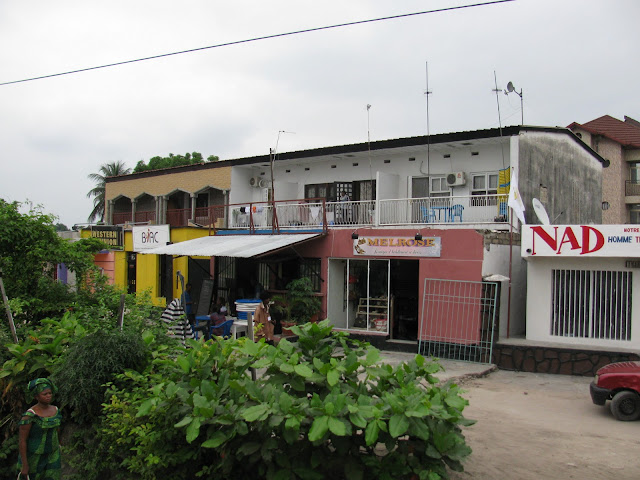 Posted by Mwana Mboka at 1:38 PM No comments:

Leopoldville 1923 - The Governor’s House and the Cultural Center

On July 1, 1923, a Royal Decree established Leopoldville as the capital of the Belgian Congo.  A subsequent Decree in August raised the new city to the status of an Urban District.  The move of the capital from Boma on the Congo River estuary had been under consideration for some time (See Mar. 13, 2011).  The previous October, former Belgian Prime Minister Henry Carton de Wiart visited the colony and while in Leopoldville, declared that the Government would soon establish itself on Kalina Point between Leopoldville and Kinshasa.  Public Works engineers in Boma were already at work on designs for the administrative district which would reflect best European city-planning practice; incorporating parallel circular avenues bisected by radial boulevards originating from a central square.  The Governor General’s residence would anchor the square on Kalina Point.  Monumental public buildings were to be erected along the main boulevards, creating an administrative district reflecting the grandeur of an imperial power.


The Governor General’s residence was thus a first priority.  A first design prepared in 1924 in Beaux-Arts style by Maurice Vander Elst, an architect of the Public Works Department in Boma, combined the volume and facades of the Congo Museum at Tervuren near Brussels with the cupola of the Royal Palace – both symbolic of Leopold II, founder of the Congo.  Also at issue for Belgian sensibilities was general criticism of the Governor General’s prefabricated metal residence in Boma, dating from the early days of the Congo Free State, derisively referred to as “the sardine can.”


The issues of national pride apparently led the colonial authorities to conclude that the design of Governor’s residence could not be left to the likes of a colonial architect and in 1928, a new competition was organized.  Of the twelve architects who submitted concepts, none had any significant experience in Congo.  Interestingly, neither the exotic 18th century design of veteran architect Henri Lacoste nor the Frank Lloyd Wright-inspired plans of Leon Stynen were retained.  Instead, the panel selected Raymond Moenaert’s concept, intended to accommodate the climate through use of arcades and other Mediterranean elements.  Nonetheless, the arabesque character of the design did not sit well with colonial authorities, in particular Governor Auguste Tilkens, the intended client.  Moenaert was sent back to the drawing board, but when Governor Tilkens officially transferred the capital to Leopoldville in October 1929 (See Jan. 6, 2011), he moved into an elegant two-story structure built for the Provincial Governor (presumably the product of the under-rated Public Works architects), up the river bank from the proposed Governor’s residence.  Tilkens and his four successors would all be involved in the Governor’s residence, but none would ever live in it.