Previous postings featured the route of the 2005 TASOK Reunion Architectural Tour (Jan. 9, 2011) as well as a history of Boulevard du 30e Juin (Jan. 23, 2011).  The tour planned for Sunday, June 5, 2011 will begin at TASOK and follow the 2005 route into town to the Gare Centrale.  The return to TASOK will follow Boulevard du 30e Juin. Featured sights along the way include:

ONATRA Building
﻿
﻿Built 1952-55 - A.VanAckere, Architect.  The ONATRA building was built as the headquarters of OTRACO in the early 1950s, the heyday of construction of monumental buildings along the new Boulevard Albert 1er.  OTRACO (Office des Transports Coloniaux – now ONATRA, Office National des Transports) was the successor in 1935 (following several iterations, subject of a future posting), to the Marine du Haut Congo which ran small steamers for the colonial government out of the port at Leopoldville at the beginning of the Congo Free State period.  The 1935 merger also placed the Matadi-Leopoldville railway under OTRACO’s ambit, as well.  Based around the port of Kinshasa, OTRACO managed its operations out of a number of two-story buildings along the waterfront.  The 10-story building which anchors the Place de la Gare was built on land belonging to the railway, and is perhaps one of the finest “classical modern” structures in Kinshasa.
In 1958, shortly after its completion, the Force Publique moved its headquarters here from the government Administration office complex in Kalina.  In the post-independence period, the Ministry of Defense was housed here, until it moved to Mont Ngaliema (see Feb. 20, 2011) after Mobutu’s coup in 1965.  After Independence, as well, the building housed the Ministry of Transport, indicative of OTRACO’s predominant role in rail, river and lake transport in the country.


The architect, VanAckere, also designed the passenger terminal (Gare Fluviale) at the port, the company’s shipyards headquarters on Ave. Poids Lourds and innovative pre-cast concrete housing for workers in the Kabinda Camp in Barumbu Commune near Ndolo Airport.  These are striking concepts and curiously no references to this architect can be found on the web. 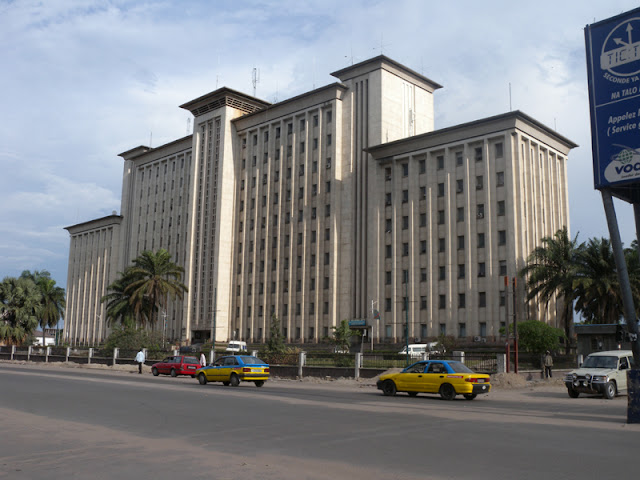 Built 1969-77 - Claude Strebelle, Architect. Construction of this building resulted from Mobutu’s requirement in 1966 that all companies working in Congo have offices in Kinshasa.  A second law called Bakajika rescinded all mining and land concessions accorded prior to Independence.  The Union Miniere du Haut Katanga (UMHK), which was viewed as having bankrolled the Katangan Secession (1960-63) against the central government, was a primary target. Ultimately, UMHK was nationalized and its interests in the new company, Generale de Carrieres et Mines (Gecamines) were assumed by the Societe Generale des Minerais (SGM). 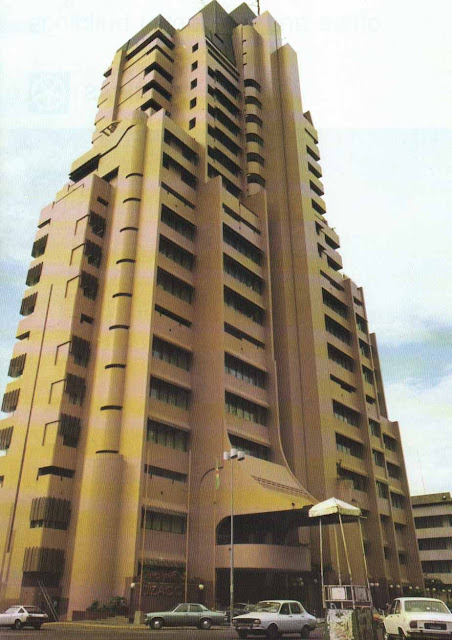 Strebelle, who designed the European School (Athenée Royale) and the Municipal Theater in Elisabethville (Lubumbashi) as well as other buildings in eastern Congo, was chosen by SGM. The 25-story tower, built by the Societe Generale's SAFRICAS is burnished with copper-colored tiles, occupies a former park on the Boulevard (see photo OTRACO Building 1960s above). The building became the headquarters of Gecamines, which in 1983 was divided into three components. The sales branch, Societe Zairoise de Commercialization (SOZACOM) was housed here and the name SOZACOM stuck.

As described January 23, 2011, the original Gare was located about 500 meters west of the current site.  The Place de la Gare became Place Braconnnier, in honor of Charles Braconnier, one of the original commanders of Leopoldville Station.  After the realignment of the Boulevard and relocation of the Gare, Paul Storey-Day built Hotel Regina on the site. For a number of years, he and his mother-in-law, Paula Colman, operated the Pension Paula across the Place where Galleries Albert was built in the 1950s.


In 1946 Leon Hasson opened “Au Chic” on the square, the first retail shop in the downtown to serve Congolese (See Sedec, Jan. 9).  The ivory market occupied the Place in the 1950s and 1960s.  The Belgian Embassy is situated at the northeast corner in Building Cinquantenaire (M. Lambrichs, Architect), completed in 1958 to commemorate Congo’s 50th anniversary as a Belgian colony.  The Galleries Presidentiels were erected in the early 1970s by closing off Ave. Rubbens (now Ave. de la Nation) as it entered the square.  In the 1980s, Hotel Regina was demolished to make way for a new Novotel.  The structure was never completed after the 1991 "pillage" and was occupied by the National Police.


Pergola Restaurant
The Pergola Restaurant was Italian owned and featured both an indoor dining room as well as outdoor seating under a luxuriant arbor (the Pergola).  The menu’s Capitaine Tartare was Mwanamboka’s consistent Sunday favorite in the early 1960s.  In the mid-1970s, the restaurant was demolished to make way for construction of the Banque Commerciale Zairoise, successor to the Banque du Congo Belge. Among major contemporary tenants is the European Union. 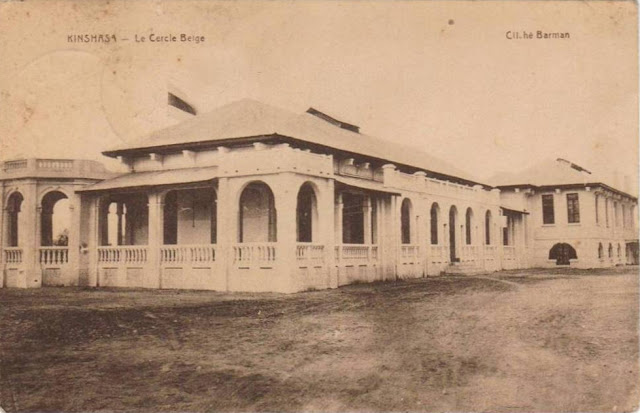 The Cercle de Leopoldville was established in the early 1920s as the club for senior Belgian admininstrative and business personnel.  The building, which now houses the National Police facing the Boulevard, actually faces towards the river, the natural orientation at the time.  In 1928, King Albert visited.  In the 1930s, the Cercle moved to the current location on the Gold course.  Sabena built a new terminus designed by Claude Laurens adjacent the old Cercle on Ave. Port in 1954.  The design included plans to construct a major hotel complex on the site, but this was deferred after Independence and the Traffic Police (Roulage) moved into the building, essentially as squatters.  In June 2008, the Rakeen Group proposed building a commercial structure on the site of the Police building.


Poste Centrale
Built 1951-52, A. Verschuere, Architect. The new Post Office opened in 1953 on the site of the original market in Kinshasa (See Jan. 23, 2011). The horizontal mass of the structure contrasts with the high-rise buildings constructed during this period.


The CCCI building across the street represents the contribution of the major colonial holding company of the Société Générale de Belgique to the monumentalism of the Boulevard.  Designed by Maurice Hoyoux, who also designed Banque du Congo Belge buildings (Ministère du Portfeuille) on Ave. Hauzeur (Ave. Wagenia), the structure curves around the corner of Ave. du Port, presenting a long façade to west-bound traffic. After Independence, the Canadian Embassy was located here, as were staff of the U.S. Embassy and the United Nations.

Lumumba’s Residence
Patrice Lumumba most likely acquired the brick house on the Boulevard opposite the Golf Course in the months prior to Independence, as residence in the European city was proscribed for Africans.  After his election as Prime Minister, he had to wait about a week until Henri Cornelis vacated the Governor General’s residence on the river, before moving into his official home.  Lumumba’s daughter, Juliana, was Vice-Minister and then Minister of Culture during Kabila père’s government.  The house is well-maintained, but does not appear to be lived in. 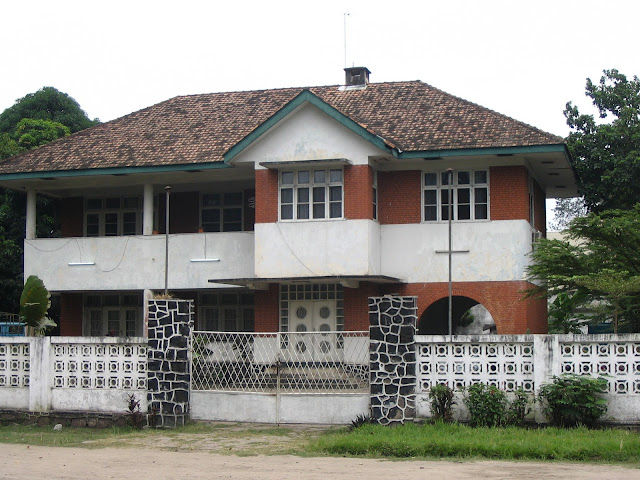 Built 1952-1954 – Claude Laurens, Architect. The twin apartment towers on concrete piers over parking spaces were built for Sabena Airlines when the company anticipated expansion of service to and within the colony with the advent of jet airliners.  Laurens, who also designed the Sabena Terminus on Ave. du Port during the same period, elaborated different size floor-plans according to Sabena’s strict staffing hierarchy.

﻿﻿﻿The original design called for three buildings, but only two were completed.  A unique characteristic of the structures are the two-story apartments within the building. Just beyond the Sabena buildings, the Boulevard widened with the Royal Apartment Building on the north side and a series of apartment buildings in a park setting popular in the 1950s.  This junction was planned in the late 1940s by urban planner Georges Ricquier as the axis of a grand avenue that would have led from the Governor General’s residence on Kalina Point (the first Parliament) to a cultural center in the Cité.