When H.M. Stanley returned to Pool Malebo in August 1880, three years after his epic transcontinental journey, he was in the employ of King Leopold II, who sought to establish a colony in the Congo Basin.  At this time about 30,000 Africans inhabited the region of the south bank of the Pool, including large villages of about 5,000 each at Ntamo (Kintambo), Nshasa and Lemba.  After touring the Pool and meeting with different chiefs (and staving off advances from deBrazza’s agents across the river), Stanley chose to set up camp for his up-river journeys on Mount Khonzo Ikulu (Mt. Ngaliema) which was healthy and easily defensible but close to the Kintambo trading center for provisioning. 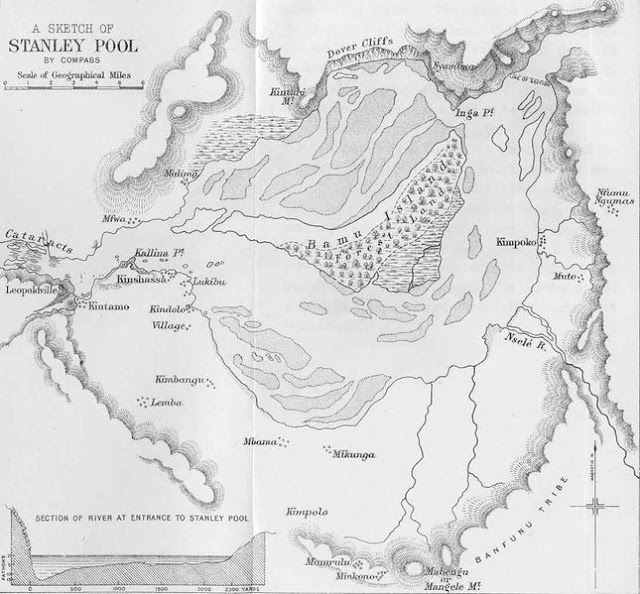 By August 1881, Stanley reached agreement with Chief Ngaliema of Kintambo.  His lieutenants, Charles Braconnier and Louis Valcke, began constructing the camp, clearing a 45 by 90 meter terrace above the river where the rapids begin, building a blockhouse, laying out roads, planting trees and erecting warehouses at the river bank.  By February of the following year, the station was complete and in April, Stanley for the first time described the place as “Leopoldville”. Stanley left on a trip upriver, leaving Braconnier in charge. In July, Braconnier granted a concession at the top of the mountain to two British Baptist missionaries (BMS), Bentley and Crudgington, who had arrived at the Pool.  Later in the year, another British missionary group from the Livingston Inland Mission (LIM), including Dr. Aaron Sims, arrived and established a station on Ngaliema Bay, upstream from the port.  The LIM, which had arrived in Congo at the same time as BMS, only intended to use the Leopoldville site as a base for building a steamer to extend their work upriver. The “Henry Reed” was delivered in pieces in April 1884, comprising 1000 porter loads.  Two months later, the BMS launched the steamer “Peace”.  In September, LIM decided to transfer its work in Congo to the American Baptist Missionary Union.  In November, the Henry Reed was launched from the Port. 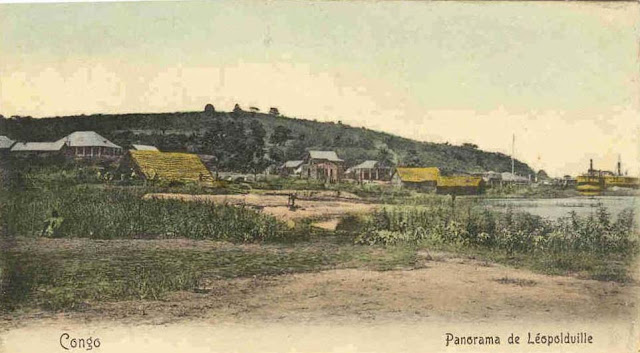 In March 1885, shortly after the end of the Berlin Conference, W.P. Tisdel, US President Arthur’s commercial delegate, visited the station.  He observed that the site at Leopoldville was poor, insalubrious.  It should be on the hilltop, not the terrace, and furthermore, he observed, Kinshasa would make a better capital.  The following year, another US commercial agent, E.M. Taunt, passed through. He chose to establish his base camp at Kinshasa, since moving the station there from Leopoldville was being discussed.

﻿
In April 1887, Charles Liebrechts took command of Leopoldville station.  With numerous steamers being brought up in pieces from the coast, he decided to expand the port, and build a tracked ramp down to the water (rather than the dry-dock under consideration) so that the hulls could be assembled on land and lowered into the river for completion.  In that year, the first courthouse was built and in May 1889 a post office created.  Over the next decade, the settlement remained much as originally laid out, but filled in with Danish pre-fabricated houses on piers and Avenue du Roi Souverain constructed up the mountain parallel to Ave. Terrace. ﻿


Dissatisfaction with Leopoldville as the site of the port remained an issue. Frans Rucquoi, the architect of the coastal capital at Boma, was commissioned to design a new capital at Kimpoko, 30 kilometers upriver (see map above). However, upon learning the site was swampy and unhealthy, never left Matadi.  When construction of the railroad from Matadi was launched in March 1890, Leopoldville was assumed to be the terminus.  However, Commissioner VandenBogaerde, studied the area along the river at Ndolo as a site for a new port.
﻿﻿ ﻿

﻿ ﻿In May 1891, Paul Costermans, the District Commissioner who replaced VandenBoogaerde, began a major building program, including several brick buildings and a thatch hospital. In December, Dr. Sims completed the little brick chapel at the ABMU station.  Neither he nor the young converts who assisted him had any experience in working with masonry.  His re-known as a physician led many Europeans to seek him out for treatment and he used the honoraria they offered to build the chapel, school dorm and a workshop.  Two years later Sims built a small brick house at the station, which became known as Sims’ House, the first location of the American School (TASOK - see post January 13, 2011).

In 1897 the Red Cross opened a sophisticated hospital at the top of Mt. Leopold where the Caravan road reached the summit from Matadi.  In addition to the Danish pre-fab units, more durable housing of brick and a new dining hall (Messe) for senior staff was built.


By October 1897, the railroad line reached the Pool and in March the following year, the first locomotive arrived at Ndolo.  The location of Leopoldville, another 7 kilometers further, was an anomaly.  Nonetheless, the rail line reached Leopoldville in July, the last kilometer running on pilings across the swampy ground.  Trains ran to Leopoldville every two days.  The port was also expanded under Commissioners Mahieu and Deuster, who dredged the bank and built warehouses.  Mahieu also built a road to Kinshasa, planted with palms.  At this time, with the railway permitting more convenient travel from Matadi, Dr. Sims moved to the port city, which was closer to Boma, leaving the mission in charge of deacon Moses Kikwakwa.  Later, the Congo Balolo Mission, another off-shoot of the Livingston Inland Mission leased the station to support its up-river mission stations.

﻿ ﻿The turn of the century represented the apogee of Leopoldville. Although the port was being expanded, Kinshasa was considered to offer a better location in terms of room to expand and distance from the rapids, which had claimed several ships.  A propeller-driven steam launch, the “Kempenaer”, was kept on standby to rescue ships from going over the rapids.


Belgian Catholic missionaries were not active in Leopoldville until 1899 when RP. Calon established St. Leopold mission. Calon’s Scheut order had used Leopoldville as a transit point for work upriver at Kwamouth in the late 1880s and Jesuits were established at Masina and later Kimwenza.  In 1902, Father Calon built St. Leopold Church, a small brick building with a thatch roof.

﻿
The town expanded significantly between 1901-05 under Commissioner Mahieu.  He constructed a dike to replace the rail line on pilings, filled the swamp around the port with soil brought down from Mt. Leopold via cable-way, laid out streets 16-20 meters wide divided by trees of various species and introduced camels and mules from the Canary Islands for transport. To improve creature comforts for the European administrators, he tried to start a brewery on Ave. du Roi Souverain and electrify the Messe using the dynamo from the “Kempenaer”.
﻿﻿


﻿ ﻿By 1906, after 25 years of development, the riverside site was built out, the Terrace comprised barracks and workshops, the streets off Ave. du Roi Souverain led to modern residential quarters.  The governmental center facing Place Stanley comprised the District building and the Tribunal with a slender column at the center commemorating the railway.  Avenue Mahieu linked the port with the railway station and Ave. Liebrechts (originally Ave. de l'Eglise) connected the Catholic Mission to the port.