We have seen how by 1928, Leopoldville, Kinshasa and Kalina were brought together along the river to form the European section of Leopoldville (See Jan. 6, 2011).  The development of the colonial administrative district of Kalina, in particular, provided an opportunity for grand planning, with an original design by Gustave Itten, Chief Engineer of the Colony. Itten had laid out the grid plan for Elisabethville (Lubumbashi) in 1910.  The Kalina design incorporated elements of “garden city” planning then in vogue in Europe.
﻿﻿


﻿﻿The creation of the European city was accomplished by expropriation and successive relocation of Africans away from the river to the south, notably by the realignment of the rail line in the 1930s (See Jan. 23, 2011).  Once sufficient land was secured and distance obtained, this separation was to be rationalized by creation of a vacant, “neutral zone”.  In fact, critics have observed that these were more accurately buffer zones (zones tampon) since Africans could access the area which comprised public space and attendant institutions.  Running east to west these included: Ndolo Airport, the market, Parc de Bock, the Zoo, the Congolese Hospital, the wireless station (TSF), golf course, cemetery and Camp Leopold II (See Feb. 6, 2011).

Using physical planning to enforce segregation was not new or unique to the Belgian Congo.  Early approaches to tropical sanitation were determined by a belief that diseases, such as malaria, were carried in the air (i.e. mal aria).  Physical separation was reinforced by regulation, a requirement that all Africans leave the European city at night, unless they were an employee (i.e. house help) or had a pass.﻿

﻿In the 1930s, Chief Engineer René Schoentjes, who designed the Gare Central and Albert 1er Monument, was responsible for Leopoldville’s urban planning.  In 1931, he presented a paper at the International Congress on Urbanism in Colonies in Lisbon (“Considerations Générales sur l’Urbanisme au Congo Belge”) which articulated his philosophy on colonial urban planning.  Schoentjes took a paternalistic approach, arguing that Congolese architectural perspectives had not progressed significantly beyond the hut and advocating for physical separation of the races.  Two years later, the Leopoldville Comité Urbain began implementing the neutral zone concept, but because no facilities were provided for the relocated Africans and several Europeans established in the proposed neutral zone obtained exemptions from having to relocate, the outcome was a band 300 meters wide rather than the recommended 800 meters.
Belgian authorities were sensitive to their “civilizing mission” and sought to provide, in paternalistic fashion, housing for Africans, who by virtue of employment, had a reason to live in the city.  At the end of World War II, a “Nouvelle Cité” was begun on 407 hectares in Quartier Dendale (now Commune Kasavubu. Dendale was the head of the Service de la Population Noire).  Within two years, 8,000 Congolese lived there, including future President Joseph Kasavubu.  Subsequently, the colonial authorities embarked on a major urban housing scheme under the Office des Cités Africains (OCA).  In the context of the 10 Year Plan, a decree on urbanization in the colony was passed February 21, 1949. 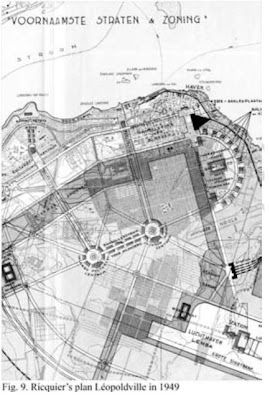 ﻿The post-war era also set the stage for development of the government district of Kalina, including the residence of the Governor General, plans for whose original monumental design had been cut short by the Depression.  In 1948, architect Georges Ricquier submitted his plan for Kalina to the Ministry of Colonies, with a monumental avenue leading from Kalina Point and the Governor General’s residence, intersecting Blvd. Albert 1er (then under construction) where Le Royal building was eventually built. Ricquier asserted that the new boulevard would exceed the Champs d’Elysées in Paris in scale and splendor.  Ricquier’s plan also called for extensive expropriation of African land to recreate a neutral zone to the south of his European city.


The following year, following significant objection from Leopoldville, the Ministry of the Colonies judged the Ricquier plan to be impossible to implement and called upon Maurice Heymans, the head of Leopoldville’s planning department, to develop a new plan.  Heymans reoriented the Governor General’s residence from Ricquier’s placement fronting the river to facing back to the city, in line with Belgian practice to allow for public assemblies in the square in front of the building.  Heymans also dismissed Ricquier’s segregationist design, arguing that the buffer zone was too narrow and favoring development of satellite cities, instead.  These came to fruition with the creation of OCA, which saw development of complete cities in Matete, Ndjili and Bandalungwa.


In 1952, Heymans was also dismissed, accused of favoring his own interests, possibly for accepting the commission for the Stanley Monument atop Mount Leopold (Mont Ngaliema) the previous year (See Feb. 20, 2011). As a consequence, there was no driving force behind monumental urbanization of Leopoldville either in Brussels or the Congo capital and elements of both Ricquier and Heymans’ master plans were only implemented in an ad hoc manner.
﻿﻿﻿
Interestingly, both architects continued to work in Congo.  Ricquier, who designed the Agence Maritime International (AMI) building on Place de la Poste in 1947, received the commission for the Central Bank building in 1953. Located on Ave. Ryckmans, what became of his monumental boulevard, the building was not completed until 1960.  Ricquier also designed the AMI office in the port city of Matadi in 1954.  The AMI building in Leopoldville was notable in having a separate entrance for Congolese.

﻿Heymans remained in private practice in Leopoldville.  In addition to contributing an unsuccessful design for the Governor General’s residence competition in 1951, he received commissions for the Galleries Albert and Galleries Moulaert commercial-residential buildings on Blvd. Albert 1er in the mid-1950s and the twin Jupiter and Neptune apartment buildings on Ave. Banning (now Kalemie) next to the BMS mission.  These were all designed in the popular “Tropical Modernism” style. In the late 1950s he kept an apartment in the Jupiter Building and managed the Société Immo Familiale.