I travelled to Kinshasa at the beginning of June to participate in The American School of Kinshasa’s (TASOK) fiftieth anniversary celebrations.  A member of the Class of ’69 and present on the first day of classes (See Jan. 13, 2011), the school is a source of many of my memories of  Kinshasa.
﻿


TASOK.  The TASOK campus looks good, and with an enrollment of over 300 students, can afford to address the toll taken by deferred maintenance over the last twenty years.  A small botanical garden has been established in the area adjacent the Middle School where the Bonobo Chimpanzees were housed until 2002, and which was seriously degraded by the confined numbers of chimps.  Examples of timber, commercial and fruit species have been identified and labeled.  Reunion alumni planted 50 native trees to commemorate the 50 years of the school and dedicated an anniversary plaque, mounted on a large, mauve Congo River stone, at the entrance to the Botanical garden. 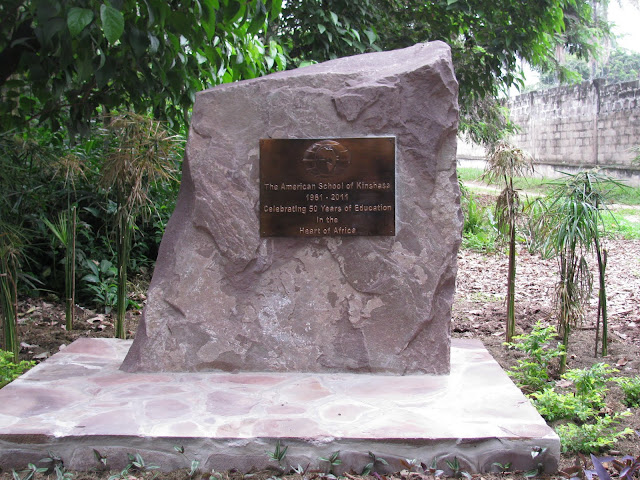 
National Museum.  One of the optional Reunion events was a visit to the National Museum (See Jan. 9, 2011), located in the former Presidential Gardens at the bottom of Mont Ngaliema down the road from TASOK.  The Museum has an excellent and well-displayed collection of Congolese art and artifacts, but I was interested in the colonial era statues and monuments, which were unceremoniously removed from their pedestals in 1972 (Henry Stanley’s boots were shorn from the body), following articulation of the Authenticité campaign and stored in the Public Works garage in Kingabwa for 35 years.  Although King Leopold II briefly appeared on King Albert’s monument in front of the Gare Centrale in 2005, the statues have resided at the Museum since that time.


Recently, the statues have been mounted on the grounds around the parking lot, although Stanley still reclines against a retaining wall beside a warehouse which holds shelves of additional artifacts and smaller busts of the Royal family and plaques taken from some of the monuments.  One of the curators explained that they were seeking additional funding to place the full collection on display.  I do not think there is any question that the statues be returned to their original placements, but they remain part of Congo’s history and it is a positive development that they are accessible to the Congolese public.


Pioneer Cemetery.   The Museum is located above the rapids within the enclosure around Mont Ngaliema, developed as the Presidential Gardens in 1967, that included a zoo, an amphitheatre and incorporated the existing “Pioneer Cemetery” (dating from the early years of the nearby Red Cross Hospital (1897) and which now houses the offices of the Commune de Ngaliema).  The amphitheatre has recently been weeded and cleaned up and a concert held there the weekend before our visit.  The cemetery was looted when Kabila’s forces took over Kinshasa in 1997 and only a few grave stones and crosses remain.  A recapitulative signboard summarizes the names and occupations of the deceased. 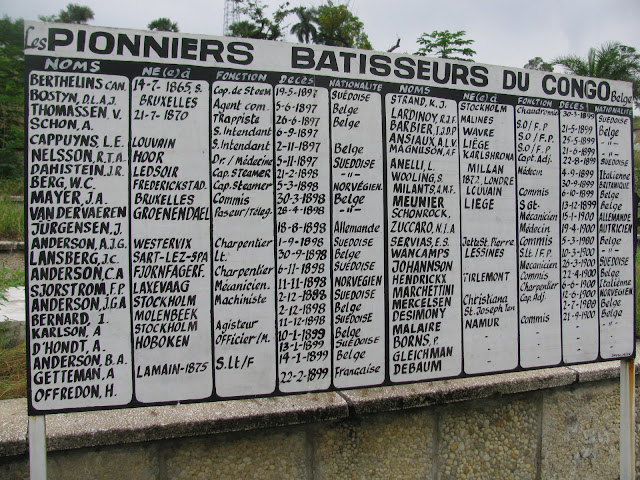 
CBCO Church and School in Kintambo.  Recent repaving of streets in Kintambo provides a shortcut from Chanimetal on Ave. Mondjiba to Bandalungwa and Ma Campagne, thereby avoiding the congestion at Kintambo Magasins.  The driver suggested we take that route and I decided to visit the CBCO complex in Kintambo (See Apr. 30, 2011).  The church and school are in use (the secondary school students were preparing for the State Exams) and in good repair.  The adjacent original church of the Baptist mission in Kintambo, which in recent years has served the francophone Protestant community across Kinshasa, has been demolished and is being rebuilt over the original site.   The baptistery and floor tiles from the original building remain.  CBCO is operating a dispensary and health center on the property and these have intruded into the earlier Christian Center.  Changing priorities perhaps, but the marginalization and deterioration of the Christian Center buildings is unfortunate.