I returned to Kinshasa June 1st to prepare for the Historical and Architectural Heritage Tour, planned for Sunday, June 5 as part the TASOK Reunion events.  Since the last tour was organized for the 2005 Reunion (See Jan. 9, 2011), I wanted to confirm that all the sites along the way were still there, as well as to scope out a walking component through the original commercial district downtown.

Kinshasa is undergoing a huge building boom.  Whether from pent up demand since the economic shocks of the pillages in the early ‘90s and Mobutu’s demise, or money laundering – or both – the skyline of Kinshasa is changing dramatically.  This is enhanced by reconstruction of major boulevards and avenues, including 30 Juin (See Jan. 23, 2011), Patrice Lumumba, Jason Sendwe, Col. Mondjiba, and Libération, as part of the Kabila Government’s “Cinq Chantiers” infrastructure program.


One of the most visible changes on the tour route is the reconstruction and four-laning of Ave. Mondjiba (ex-Engels), linking old Leopoldville with Kinshasa.  Essentially an extension of Blvd. 30 Juin, the new road will culminate at Kintambo Magasins.  How the increased traffic will be funneled through that “spaghetti” junction is not clear.  In contrast to the widening of 30 Juin, which took several years, residents concede that the Chinese contractors must have learned some lessons, as the work seems to be proceeding well.  Unfortunately, the huge trees, which formed a canopy road through Utex have fallen to the bulldozers of progress.


UtexAfrica – In 2004, Texaf and the Chinese firm CHA formed a joint-venture, Congotex, to reinvigorate the near moribund textile operation, challenged by the demise of domestic cotton production and competition from cheap imports (mostly from China).  The effort collapsed in August 2007 and 1000 workers lost their jobs.  Congotex put up $1 million for severance, mostly to come from rental of the company housing and physical plant.  The word is that the CHA deliberately shut the place down and shipped the spinning and printing machines to China, though it is unlikely that the ancient equipment would have had much value in China’s economy.  Except for high-end Super-wax prints, most fabric on sale in the city is from China.  The Tigo phone company occupies the former office building.


One positive development is that the French Embassy has finally completed renovations of the original Texaf Admistration building near the beginning of 30 Juin.  The upper floor of the building can be viewed over a substantial wall.

BMS. The former Baptist Missionary Society mission station, now the Congolese Communauté Baptiste du Fleuve Congo, is undertaking what is euphemistically called “auto-financement”, leasing land on the former mission station for private construction.  Given current land prices prevailing in the city, these large properties in prime real estate markets are very attractive.  Concrete and reinforced steel foundation works below grade suggest a major apartment building is going up. The two century-old wooden houses appear to be in good repair, but a new construction fence blocks the view of the river.


Continuing up to the river, crossing the Place de la Poste is the Bingo Royale Casino, formerly the offices of Hewa Bora Airlines and originally the PEK department store (Plantations et Elevages de Kitobola, part of the Compagnie Coloniale Belge -- CCB).  The PEK plantations and ranch at Kitobola were located outside of Tumba in Thysville (Mbanza Ngungu) Territoire. Kitobola was originally an agricultural demonstration station of the Congo Free State.  When the Minister of the Colonies announced plans to sell Kitobola in 1918, the CCB was created in Antwerp in July of the following year. 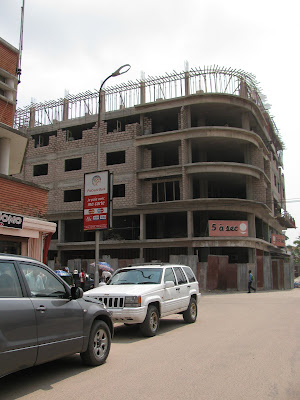 Checking out the walking tour.  Reaching Building Forescom (See May 28, 2011), I went on foot down Ave de la Paix (Cerckel) past the JVL butcher shop (now Pro Credit) and the Mampeza Company.  At the corner of Paix and Equateur (ex-Beernaert) a major multi-story office/commercial structure is under construction.  A sign indicates “5 a Sec”, the dry-cleaning company which converted the early 20th Century building into a dry cleaners around 2005. Originally established by NAHV (Nieuwe Afrikaanse Handelsvereniging, See Mar. 13, 2011), the firm lost market share after Independence and the building passed to local investors. Prior to the dry cleaners it housed Extrème Pizza.


Similarly, at CBCO in Kintambo, a cellular telephone tower and a three-story sports facility accessible from Ave. Montagne for the Hôpital Ngaliema up the street attest to the same financial approach.  One assumes that the revenues will be used to support church work in the Capital and the churches in the interior.

Turning up Ave. Equateur; Avenue Beernaert was the main commercial street of old Kinshasa, crossing Ave. Aviateurs at the Place de la Poste.  The Patisserie Nouvelle opened in October 1941 – it has maintained the same name for the last 70 years. Opposite is a building vacated by Elf Petroleum, originally the Portuguese Club.

On the corner opposite the old Stanley Hotel, later Musée de la Vie Indigène and now Gallerie du Fleuve (See Feb. 20, 2011), is another construction fence with the concrete shell of a 22 story building towering above it, the Congo Trade Center.  When I left Kinshasa in 2006, the building on the corner housed GTS Express (a freight forwarder) and Ets. De Cock, which had bought the Travhydro group in 1987, including the adjacent lot on Ave. Wagenia (ex-Hauzeur).  Originally, the building was the G.B. Ollivant store, part of the Lever Brothers group, which in Congo included Marsavco and SEDEC.  The web informs that “Ollivants” was the place to buy your pith helmet and silk shirts.

The Congo Trade Center is being built by Modern Construction with South Asian capital.  When complete, it will include a 240-room hotel, a shopping mall, grocery, six restaurants, a casino, bar and nightclub.  Modern Construction is also planning or has under construction: Modern Plaza (a 5-Star hotel), Modern Bella Casa and Modern Paradise.
﻿

Gare Centrale.  The creation of the Place du 30 Juin in front of the Gare is a master stroke.  It anchors the expanded Boulevard du 30 Juin and provides public space of a kind which is rare in Kinshasa.  It has become a popular place for Congolese stroll, congregate and take pictures.  High rise buildings are going up around the square, which should increase street-life here.