Kinshasa’s urban face is changing dramatically.  Economically depressed since the early ‘90s, a construction boom is clearly evident across the city, not only in the historically “European” downtown of Commune de la Gombe, but throughout the city.  This is attributed to several factors.  Some cite the introduction of capital and expertise from within the country, in particular the Azande from Orientale Province, BaNande from North Kivu and BaLuba from Kasai.  Other reports talk of Lebanese and South Asian investors.  A thread running through it all – allegations of dirty money.


Congo Futur, founded in 1997 by the Lebanese Tajideen family, is a major player in the real estate market, though it has a range of business interests including import-export and light manufacturing. The firm began constructing Future Tower on Blvd. 30 Juin in 2004 on the site of a commercial building suspended by the “pillage” in 1991.  During the tense period in the lead up to the elections in 2006, construction on the 13-story building continued.  The company now has several properties under construction: Crown Tower, on the corner of Blvd. 30 Juin and Batetela; a building material retail outlet on Ave. Liberation and an apartment complex.  There have been allegations of money laundering and funding Hezbollah in Lebanon, which the company has denied.  At the beginning of July 2011, the Central Bank of Congo advised all commercial banks in the country to cease operations with Congo Futur.  The company subsequently changed its name to Africa Trading Company and then Kin Trading, but future developments are unclear.

Rakeen Group properties. In June 2008, President Kabila signed an agreement with the Rakeen Group, one of the principal property developers in the United Arab Emirates, for a $500 million deal involving office/commercial towers on Place de la Gare (now Place du 30 Juin), and 32 story hotel and conference center at the Office des Routes property next to the Athenée facing the Place de l’Independance.  The deal also covered development of a luxury hotel at the Kinshasa Traffic Police (Roulage) headquarters property in the dilapidated former Cercle de Léopoldville, which Sabena had targeted for a major hotel by Claude Laurens in 1954 (See Mar. 19, 2011).
The plan was to complete all of these in time for Congo’s 50th Anniversary of Independence, June 30, 2010.  But, 2008 was a bad year for real estate globally, including the boom market in the Gulf, although construction continued steadily though fitfully at “Place de la Gare” building.  Recently, a construction crane was erected at the Office des Routes site, suggesting work may finally begin on the hotel and conference complex.


Hotel Kadima.  When I moved back to Kinshasa in 2001, I stayed a few weeks at the Flat Hotel Alhadeff next to Building Forescom on Ave. du Port (See May 28, 2011).  This four story nondescript building (no signage or windows at street level) had four studio apartments on each floor.  Previously known as the Alhadeff Arms -- the U.S. Embassy Guest House -- it was built by Maurice Alhadeff, a long established businessman in Katanga and Leopoldville and the Honorary Israeli Consul in the 1950s.

André Kadima, former Director General of the petroleum products firm SEP-Congo, and owner of the Chaumière Restaurant off the Boulevard, bought the place in the late 1990s.  His dream was to open the first Holiday Inn in Kinshasa and knew just where he wanted it – at the end of the Boulevard on the Place de la Gare.  In keeping with his hospitality vision, he opened the African Dream Hotel in 2005 in a converted villa near the Cimetière de la Gombe on Blvd. 30 Juin.  ﻿
The L-shaped building nearing completion on the north side of Place du 30 Juin is referred to as Hotel Kadima, though some have suggested that construction work has been suspended. 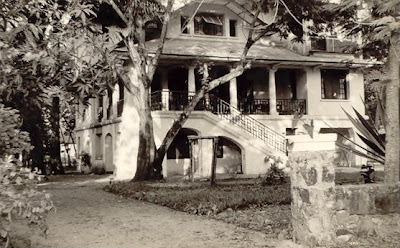 At stake in all of this real estate development in Kinshasa is the loss of historic structures (See Mar. 24, 2011) and a lack of a planning framework or preseveration movement.  Where Zanzibar and Mombasa have found their colonial architectural heritage to be a complementary asset to their “sun and surf” appeal, Kinshasa is not yet on the contemporary tourist circuit.  At the same time, it must be recognized that in post-colonial states, this heritage is a reminder of a period many would like to forget and is costly to maintain.  An example is the Chateau Margaux restaurant, opened in a colonial era villa on Ave. Mbuji Mayi (ex-Leman) in 2005.  The buffet offered both Congolese and European specialties.  Caught up in the vortex of escalating real estate values, the landlord tripled the rent and Chateau Margaux closed.  Chez Patrick, another restaurant in a pre-independence villa, also closed in 2008.

Cité du Fleuve. Perhaps the most ambitious of the real estate projects currently under development in Kinshasa today is the Cité du Fleuve, a 375-hectare land reclamation project on the marshes just upstream from Ndolo Airport, seemingly inspired by the Palm Island development in Dubai.  When complete, it will comprise two islands connected by causeway to the mainland and include upscale residential housing, hotels, shopping, reserved districts for diplomatic missions, academic institutions and a marina.


The project was conceived in 2008 by Robert Choudury of Hawkwood Investments and joined by Mukwa Investments of Lusaka, Zambia.  Construction started in June 2009 by Safricas and by mid-2011 the larger, inland island had been completed by pumping Congo River sand into a containment enclosure. Developer Choudury notes that one the advantage of the site is that “no one has ever had title to these lots”. 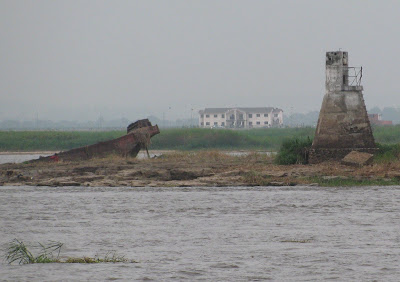 From the river, a single two-story building can be seen.  Urban landscaping has been completed along the water front.  Construction of the first villas is under way.  Some day, if completed, the buildings planned for the community will rival those of Sozacom and Galleries Présidentielles as the first sight of the city travelers from upriver see -- a claim earlier ceded by Hotel A.B.C. and later Building Forescom.  Recently, Citilinks Group of Hong Kong, announced plans to redevelop the Calico Printers Association (CPA) site on the rapids downstream from Kinsuka as the “Congo River Resort”.  CPA was one of the properties included in the failed Congotex restructuring of the UtexAfrica textile operation.


This brief summary is neither comprehensive nor intended to be a boosterish Chamber of Commerce type report.  Though the developers talk of jobs creation and addressing residential or hotel-room deficits, the fact remains that these developments are targeted at the elite, up-market sector.  So, it was a pleasant surprise to find a bit of adaptive reuse in my old neighborhood -- Nando’s has come to Kinshasa.


The South African fast-food chain opened recently in the former Imprimeries du Zaire building at the Kintambo Magasins junction, closed and guarded by Police since it was plastic-bombed in October 1991.  The printing house produced the daily newspaper, Elima, which had become increasingly critical of Mobutu and supportive of the opening of multi-party politics Mobutu had grudgingly conceded.  In the 1950s, the site next to the Mobil Gas station was originally the Ciné Roxy.  During the late ‘70s or early ‘80s Elima contracted Safricas to build the printing plant there.  Libra Commercial Center rehabilitated the structure in 2009 and Nando’s opened in July.﻿
﻿