In the early years of Leopoldville and Kinshasa’s development, architecture was rarely practiced as a profession but derived from the work of missionaries, military officers, public works engineers and private contractors.  Indeed, Sims Chapel in Kintambo (See Apr. 30, 2010) was the work of a medical doctor, while Ste. Anne Cathedral in Kinshasa was built by Brother Reygaerts of the Catholic Scheut Mission.  Many early buildings were pre-fabricated in Europe and assembled in the colony, including the British Consulate erected in Kinshasa in 1906, the NAHV building and the Hotel A.B.C. (See July 3, 2011 & Mar. 27, 2011).


In 1915, the Ministry of Colonies called for an increase in the number of architects assigned to the Colony, confirming that the practice was not to be viewed as a luxury.  Some buildings from this period escape identification of their designer, such as the Banque du Congo Belge, constructed before World War I.  Many other buildings from this period exist whose provenance is yet to be identified.


The original Post Office in Kinshasa was built in 1916, the work of Gaston Boghemans (1891-1984), an architect established in Belgium (See Feb. 20, 2011).  After WWI, Boghemans was considered an authority on colonial housing, whose designs promoted wrap-around verandahs as a passive cooling system for tropical dwellings.


﻿ In 1925, Ernest Callebout (1887-1952), another Belgian-based architect, designed the public market on Ave. Cambier (See Feb. 6, 2011).   The project was financed by the Crédit Foncier Africain (CFA), founded by the Bank of Brussels in 1921, and which also financed Callebout’s Hotel Metropole in Matadi, which similarly incorporated “orientalist” details in the design.  After the Public Market moved to its current site in 1943, businessmen Maurice Alhadeff and Henri Palacci opened Rodina La Coupole, evoking Alhadeff’s home island of Rhodes.   In 1967, the store opened under Congolese ownership as African Lux.


After King Albert and Queen Elisabeth’s visit in 1928, a new hospital was planned on a hill in Kalina, where the new administrative district of the colony was being built (See Jan. 9, 2011).  The initial Art-Deco design was by Richard Lequy, an architect with the Public Works Department.  Lequy also provided plans for an expansion of the Hopital du Rive, the original hospital below on the rapids Chanic, which became a hospital for lepers in the 1950s.


The following year, architect E. Haline-deVillefort designed the Institut Princesse Astrid next to the Hopital des Congolais in Kinshasa which was developed to improve the practice of tropical medecine.  The Institute was named for Astrid, the wife of Leopold III, who became King in 1934.  Leopold and Astrid visited the colony in 1925 and the Princess made a point of visiting the nearby Congolese hospital. 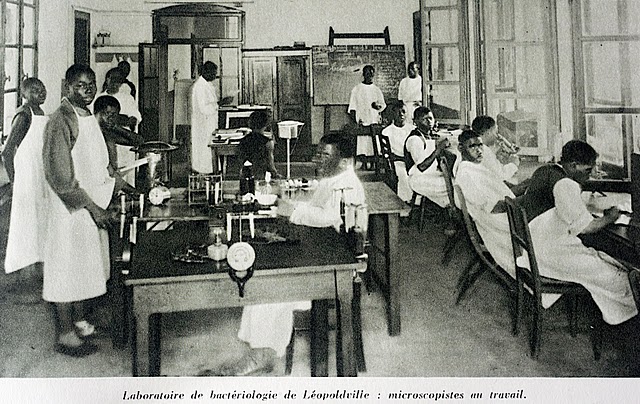 The Ecole des Assitants Médical Indigènes (School for native medical assistants) was built in 1934 behind the Institute by another Public Works engineer, J.Popijn.  Popijn also designed some of the buildings at College Albert and the Parc Sports Ermens (See Feb. 6, 2011).


The 1930s also witnessed the introduction of art-deco designs.  Rene Schoentjes (1891-1949), the Chief Engineer of the Colony in the 1930s, designed the Gare and Albert Monument in the late 1930s (See) as well as the European hospital in Albertville (Kalemie).  He also contributed designs for the Governor General’s residence, but when this was rejected, after WWII, given the commission for the secular European schools in Leopoldville, Elisabethville (Lubumbashi), and Bukavu.  In a departure from his earlier art-deco work, the unadorned mass of the Gare is repeated in the main building of the Athenée.