After Independence, Kinshasa’s population boomed.  The carefully managed plans of the Belgian colonial administrators were lost in the push-pull factors of civil unrest that followed Independence and related growing recognition among Congolese that economic opportunities in the rural areas were becoming increasingly limited. From just under half a million residents in 1960, the urban population had increased by more than 60% by the time of Mobutu’s coup in 1965. The massive urban influx and lapse in urban management services saw the expansion of informal settlements around the periphery of Leopoldville coupled with the densification of established residential districts.


Historically, neither Catholic nor Protestant missionaries working in Leopoldville placed much of a priority on Congolese living in the colonial capital.  The missions were primarily based in the city for logistical reasons, to support up-country stations, but as the city grew, the churches belatedly began to consider the growing numbers of faithful who were moving into the city. The creation of 24 Communes in 1966 (from 10 in 1960) set the stage for construction of church buildings in the new administrative districts.  In 1965, the American Baptist mission assigned John Marshall to build new churches throughout the city (See Apr. 30, 2011).


Paul Dequeker (b.1930).  Brother Paul Dequeker joined the Diocese of Leopoldville in 1958, a recent graduate in tropical architecture from the Architectural Association School for Architecture in London.  One of his first projects was the Scolasticat Nkongolo for his Scheut Congregation at the recently completed Lovanium University on a hill outside the city.  Over the next 30 years, nearly every significant building built in the Diocese bore his imprint of simple, climate-sensitive style which could be constructed by artisans with limited experience and equipment.


Barumbu Commune was one of the three original cités (Barumbu, St. Jean (Lingwala) and Kinshasa) of Kinshasa.  Brother Piet Nooyen built the original church of St. Paul Parish near Ndolo Airport in 1945. In 1967, Dequeker designed a new brick church and parish buildings.

In the late 1970s, Dequeker designed a new residential complex for the priests at Ste. Anne parish.  Ste. Anne was the original parish of Kinshasa in 1903 (See Mar. 13, 2011) and was developed over the years to include the cathedral, rectory, procure, and College St. Joseph.  The three-story, U-shaped structure provided single and duplex apartments for the priests.
Another Dequeker church from this period, St. Augustin was constructed in Lemba Commune in 1977.  Lemba is known as the “Quartier Latin” for its proximity to the University of Kinshasa.  Lemba was one of the planned communities built before Independence and Lemba parish was established in 1959.
In the 1980s, Dequeker designed a significant new church building in Parish St. Raphael on Ave. Lumumba.  St. Raphael Parish was established in 1958 and was likely named as a memorial to Father Raphael de la Kethulle de Ryhove, “Tata Raphael”, who promoted soccer in the city and who was instrumental in building Stade Astrid and Stade Baudouin (See Feb. 6, 2011). Built on a triangular site at the junction of Blvd. Lumumba and Ave. de l’Université, the church is constructed in the form of a stepped pyramid.
Others in Kinshasa employed Dequeker designs.  In 1971, the American Baptist (CBCO) Christian Center at Kintambo (See Apr. 30, 2011) replaced the original primary school buildings on the old church compound with a series of single-story structures designed by Dequeker, including classrooms, a library and a kindergarten.
Eugène Palumbo. Educated in Milan and Lausanne in architecture and topography during World War II, Palumbo first came to Congo in 1952 to design the company town for the hydro-electric dam at Zongo on the Inkisi River near Leopoldville and later at the Bendera power station north of Albertville (Kalemie) in Katanga Province.  He returned to Switzerland in 1959, but was tapped by UNESCO in 1962 to head the ambitious national schools program.  He travelled extensively around the country in the early 1960s, producing designs for the School of Mines in Bukavu and the Athenée de Kenge in Bandundu Province.
In Leopoldville, he contributed significantly to facilities for higher education, a priority of UNESCO, including the Institut Pédagogique National (Université Pédagogique National since 2005) on the Matadi road in Binza, created in 1961; the Institut Supérieur Pedagogique in 1961 next to Sacre Coeur in Kalina (now ISP Gombe); the Institut National du Batiment et des Travaux Publiques in 1962 (See Feb. 20, 2011); and the Institut Supérieur des Techinques Appliquées (ISTA) at Ndolo Airport.
Palumbo also collaborated with M.Tolleri, on the design of the Ministry of Foreign Affairs in 1968, the first post-Independence structure to be built on Ricquier and Heymans’ monumental boulevard in Kalina (See July 31, 2011).
Olivier Cacoub (1920-2008). Cacoub was a Tunisian-born French architect, known as the “architecte du soleil” for his significant body of work in sub-Saharan Africa.  He might also have been known as the “architect of the dictators”, having produced Presidential palaces for Houphouet Boigny in Cote d’Ivoire, Paul Biya in Cameroun and Mobutu Sese Seko in his hometown of Gbadolite in northern Equateur. 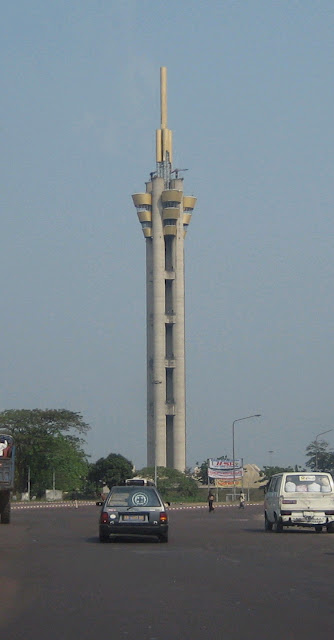 On Independence Day, June 30, 1966, Mobutu proclaimed Patrice Lumumba a “national hero”.  In 1971, Safricas began construction of a monument to Lumumba from Cacoub in the form of a 210 metre tower, which was the tallest in the world at the time.  Located on Blvd. Lumumba on a roundabout called “Echangeur de Limete”, the tower, which was to have featured observation platforms and a restaurant, was never completed.  In 2002, a statue of Lumumba was erected in front of the monument at the entrance to the city from Ndjili Airport.  In 2010, the government launched reconstruction work around the base of the monument, but the intent or final outcome remained unclear in mid-2011.

Mobutu began developing Mont Ngaliema into the Presidential Gardens in 1967 as part of the project to host the Organization of African Unity (OAU) meetings in September of that year.  Cacoub prepared the initial designs.  The work was completed in 1969 and included a fence around the hill, enclosing the Pioneer Cemetery (See July 5, 2011), creating an amphitheater, a Presidential Zoo and formal gardens on the promontory overlooking the rapids at Kinsuka.
Cacoub designed the Centre de Commerce International du Zaire (CCIZ) in 1972 on the river near the Hotel Intercontinental (See May 7, 2011), intended to place Kinshasa at the center of the African business world.  It was originally planned as a complex of three towers including a 1000-room luxury hotel and 6000-seat congress hall. Construction of the first 20-story structure began in 1975 and was completed in 1977.  Unfortunately, the design did not include operable windows and a few months after completion, the air-conditioning system broke down.  Lacking funds for repair, the building was abandoned.  In March 2011, a Chinese company began gutting the structure to convert the building into a 5-star hotel to be called the Hotel du Fleuve Congo.

Fernand Tala-Ngai (1939-2006).  A Congolese trained in Belgium as an architect, Tala-Ngai was the son of Joseph Davier (he opted for the Congolese name after Mobutu introduced the Authenticité campaign in 1971). Tala-Ngai's father was born in the port city of Boma in 1910 and worked for the transport parastatal, Otraco, from 1929-44, after which Davier went into business for himself.  After Independence, he served as Chief of Staff to the Minister of Economic Affairs and was President of the Congolese Red Cross and continued his import-export business into the 1970s.  In 1968, newly-minted architect Fernand designed the new Supreme Court building on Ave. Valcke (now Justice) in collaboration with Eugène Palumbo.
Tala-Ngai is also credited with the Palais de Marbre, the Kinshasa International Fair (FIKIN), and the Immeuble Centennaire downtown and an apartment building opposite the Regideso headquarters on Blvd. 30e Juin.  At the end of the 1970s, he designed the Hotel de la Monnaie, an expansion of Ricquier’s Central Bank building (See July 31, 2011). The new structure was connected to the bank by an elevated concrete walkway.
With the advent of multi-party politics in 1990, Tala-Ngai joined the opposition, and was named Minister of Economy in Tshisekedi wa Mulumba’s first government and Minister of Urban Affairs in 1992-93, however Mobutu’s intransigence meant little of substance was accomplished by the Tshisekedi government. With the advent of the first Kabila government in 1997 he was nominated Vice-Minister of Finance then Minister in the following year.  However, after the Rwandan-led invasion in August 1998, he was sacked and charged with treason.  He appealed the charge, but received a 7-month prison term in August 1999.
Sources:
·        Dequeker, Paul & Mudiji Malamba Gilombe, 1984. Eglises tropicales, Kinshasa: Eds. C.E.P.
·        Fullerton, Garry, 1964. UNESCO in the Congo, Paris: UNESCO.
·        Le Potentiel, “Fernand Tala-Ngai n’est plus”, Kinshasa, 16 février, 2006.
·        http://www.skyscrapercity.org/
·        http://www.wikinshasa.org/