Leopoldville 1957 –Fish at the Zoo

One day in March 1957, my dad showed me an advertisement from the Zoo (Feb. 6, 2011) in the “Courrier d’Afrique” newspaper in Leopoldville announcing it had completed construction of some new animal enclosures and invited the public to come out the following Monday to see the animals in their new surroundings. When we arrived, there were indeed new, more animal-friendly habitats than the cages that were norm in the original development of the Zoo. But the animals were plush toys with signs proclaiming “Poisson d’Avril” (April Fools) next to them.

I visited the Zoo in April 2017. Management is trying to keep the Zoo going, promoting family visits on Sundays and rides on the horses it inherited from Mobutu’s cavalry detail. 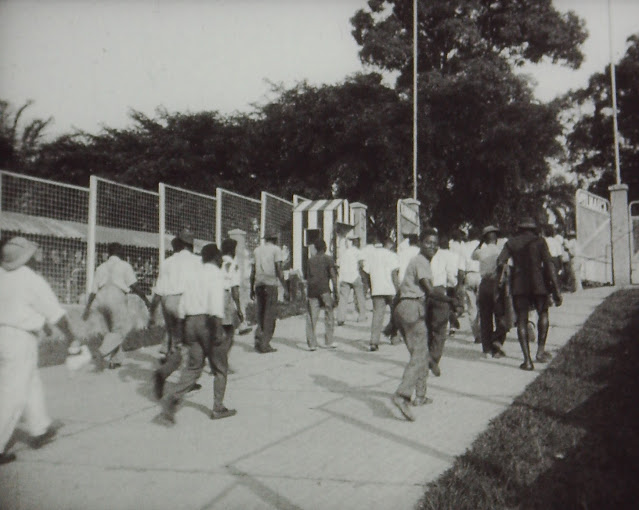 Chanic workers at the end of the day (Ph. flickr.com) 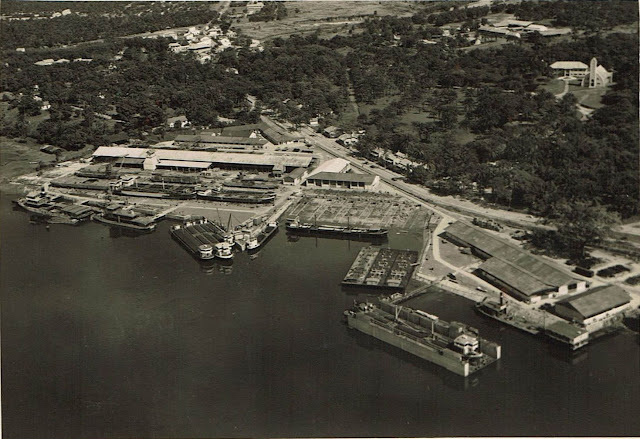 Chanic installations in the 1950s (Ph. author coll.)
A new headquarters building at Basoko was completed in 1953, the company’s 25th anniversary. The shipyard and slips at Basoko were closed in 1958, consolidating all ship building and repairs at the original yard. 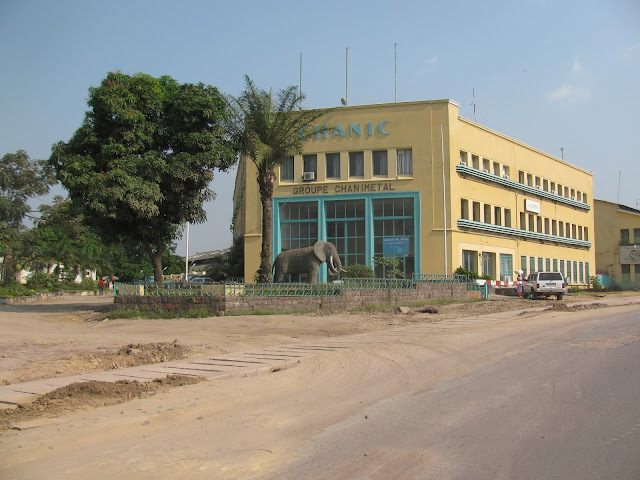 Chanic headquarters on Ave. Mondjiba during the widening of the street in 2011 (Ph. author)
On the eve of Independence in June 1960, Chanic transferred its legal entity to Belgium to protect its assets from potential adverse fiscal and tax policies the new country might apply. The following year, Chanic registered two new Congolese companies, Chanimetal (comprising the shipyards and foundry) and Chanico (industrial representation). The economic dislocation that followed the events of Independence had a significant impact on ship building. This was mainly due to problems of its primary client, Otraco. By 1962, the number of ships constructed had declined to 18 from 34, output of the foundry had dropped by half, with similar declines in the oxygen and acetylene units. Consequently, the number of Congolese employees was reduced to 500 and European workers declined to 16. A 1963 mission by the European Economic Commission recommended privatizing Otraco’s naval yard at Ndolo, noting Chanic had appropriate experience. Chanic rented space in the Basoko complex to the United Nations Tunisian and Malay peace-keeping troops and some of its residences along Ave. de l’Avenir to the newly-established American School of Leopoldville, which at that time was located on the American Baptist Mission next to the shipyards (Jan. 13, 2011).
After Mobutu’s coup in 1965, the economy recovered somewhat, and with it, Chanic’s fortunes. Ahead of the Organization of African Unity meetings in September 1967, the shipyards refurbished Otraco’s “General Olsen” as the Presidential “yacht”, renamed the “Kamanyola”, equipped with a helicopter pad on the stern. Chanimetal built 27 ships in 1968, an almost three-fold increase over 1964. In 1972 Chanic launched a new subsidiary, Chanitec, to supply, install and maintain systems in high rise buildings, including Westinghouse air conditioners and elevators.
The “Zairianisation” of the economy announced in late 1973, made all foreign-owned subject to take over by nationals, in practice Mobutu’s cronies and other well-connected individuals. In 1967, Chanic had restructured its capital to give the Congolese state a 29% share in the company, based on the Unatra holdings which were the property of the colonial government. But this did not exempt it from the ”Zairianisation” measures. An “aquereur” sought to hive of the Westinghouse account, even though they had no experience in air conditioning. A Zairian General Director was named to the Administrative Council. As the economy cratered due to the negative effects of “Zairianization”, the Government “radicalized” the nationalization and reached an agreement with Chanic in May 1976 in which all Chanic subsidiaries in Zaire were folded into Groupe Chanimetal, with the GOZ holding 60% of the shares and 3 of 5 seats on the Conseil. The 1980s did see a reduced, though fairly stable output of 15 ships built per year and 65-75 repaired, mostly linked to investments by Onatra to upgrade its fleet.
The “pillage” of September 1991 dealt a severe blow to the Zairian economy. Although Chanimetal itself was not looted, the impact on its clients had nearly the same effect on the firm’s balance sheet. Orders dropped by 90%, and the company released 1000 of its 1500 employees, claiming “force majeur”. The prospects for improvement did not appear promising in the war that followed Laurent Kabila’s takeover in 1997. In 1999, Groupe Suez, which had taken over SGB, sent a young financial manager with no experience in Congo to liquidate the company. Vincent Bribosia, however, was charmed by the installations along the banks of the Congo River and believed there remained potential in the property and a future in river transport. In 2000, he bought the company. By the time he hosted a visit by King Albert II of Belgium during the 50th Anniversary of Independence celebrations in June 2010, the company was slowly gaining orders.
In 2013, government signed a contract to rehabilitate the Otraco towboat “MB Gungu”, first built by Chanimetal in 1976 and out of commission since 2001 and its service during the war with Rwanda and Uganda. Other orders were received from SEP Congo for towboats and barges to carry fuel upriver and with Majestic River to rehabilitate two of its river boats as cruise ships.An item of curiosity for Kinois was the fate and whereabouts of Chanimetal’s emblematic elephant which stood outside its vacated headquarters building at the Basoko site on Ave. Mondjiba and disappeared after completion of the reconstruction of Ave. Mondjiba in the 2010s. Mwana Mboka located it on the grounds of the Director General’s residence on Ave. de l’Avenir in October 2016.
Sources:
Posted by Mwana Mboka at 12:25 PM No comments:

A few years ago, I posted a piece about Guilherme d’Oliveira Marques, known as the “Painter of the Congo” (May 17, 2017). It was prompted by a serendipitous find of an old photo of his house. Today, in a similar vein, while researching another topic, I learned about his role in helping start what is now the Académie des Beaux-Arts in Kinshasa.
In 1942, Brother Marc Wallenda of the Frères des Ecoles Chrétiennes at Gombe Matadi mission near contemporary Mbanza Ngungu in Congo Central Province, had finally realized his dream of starting an art school at the mission. Previous construction starts had been re-prioritized for uses deemed more important by the mission’s hierarchy. Now the walls were up, but lack of funds meant the roof would have to be thatch rather than galvanized metal, the norm at Catholic missions at the time. On a visit to Leopoldville, Brother Marc met Marques and the latter proposed they organize an exhibition of his paintings as a fund raiser, to which Marques donated over 60 pieces. The event was held in the new hall at College Albert (Jan. 17, 2012) on a Sunday morning and by 4:30 pm, all the paintings were sold out. Brother Wallenda had his new roof.
The new school was inaugurated at Gombe Matadi August 15, 1943. The following month, the first students, Andre Lufwa Mawidi and Jacob Wineguane, were admitted. From the outset, Brother Wallenda discouraged reproduction of traditional sculpture, but encouraged the young artists to develop their own styles. Two years later, he took some of his own paintings to Leopoldville for another fund raiser, and like the event with Marques, the paintings sold out, enabling the purchase of proper tools, instruments and materials. Another exhibition in 1946 added funds for the young institution.
It was becoming clear to Wallenda that a growing art school would be better placed in Leopoldville than in rural Bas-Congo. In 1949, the Colonial Minister granted 10 hectares on Ave. Josephine Charlotte (Ave. de la Liberation) for the school. Brother Marc had to switch to his fund-raiser and builder mode again. Two years later, the first buildings were completed and the school was accredited as the “Ecole officielle des Beaux-Arts Saint-Luc”, a reference to Wallenda’s alma mater in Liege. A painting program was added to the sculpture section in 1950, pottery in 1953 and architectural design in 1958. Andre Lufwa became the first Congolese member of the teaching staff.
Lufwa produced the “Batteur du Tam-Tam”, a white cement sculpture placed at the entrance of the first Foire International de Kinshasa (FIKIN) in 1969 (Mar. 20, 2015). Other works include the imitation stone Leopards at the entrance to the Presidential Gardens on Mont Ngaliema, and “Voyageur” on the grounds of the Ministry of Foreign Affairs. Lufwa never received any royalties for his work. He continued to work with his son, Bernard, also a sculptor, at their atelier in Commune Ngaliema.
Even though he was a member of the intellectual property body SOCODA, founded in 2011, Lufwa was thwarted in his pursuit of compensation for his work, by his estimation over one million US dollars. In 2019, Lufwa, now 94, appealed to the new President Felix Tshisekedi to establish his royalty rights. In early January 2020, hospitalized at Clinique Ngaliema, a journalist noted with irony that the Ministry of Foreign Commerce was investing $1.3 million to rehabilitate the FIKIN complex. Lufwa died January 13, 2020. At the end of February, the Academie des Beaux-Arts memorialized the artist in a ceremony on the campus and a bust of the artist was placed outside the sculpture building.
Sources:
Posted by Mwana Mboka at 8:52 PM No comments: