Leopoldville 1926 – Hotel Sica – The Mystery of the Memling

In 2011, I posted a piece about the Hotel Memling, its origins as the Hotel SICA and after 1937, a property of Belgian Airlines Sabena (Mar. 29, 2011). Recently, a colleague shared an early photo of the Hotel SICA which sent me back to research. The complex in the picture clearly reads “Hotel SICA” on the gables of the annexes in the foreground, but the main building in the background doesn’t match the SICA. My friend’s photo looked more like the Hotel Metropole of the 1920s. Was there a connection? I believe I’ve solved the mystery by consulting documentation at hand and conjecture from the evidence portrayed in images. 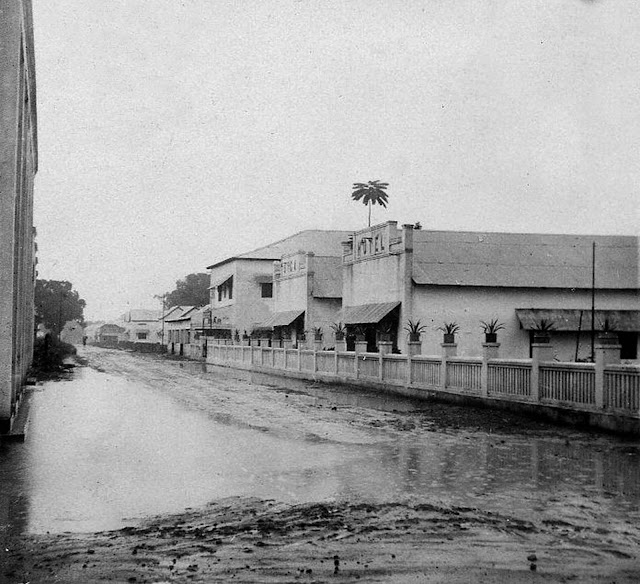 The photograph of the Hotel SICA. 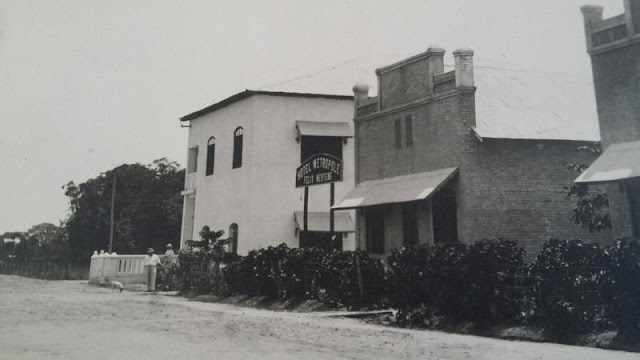 The Hotel Metropole in the 1920s
A related issue was Belgian Airline Sabena’s claim to have created the Hotel Memling in 1937, although that name did not appear in print until after 1952. In my original post, I hinted, admittedly obliquely in retrospect, that Sabena based its claim to the Memling on the Sabena Guest House (near Ndolo Airport on Ave Kabasele Tshamala), both of which were subsumed by the Compagnie des Grands Hotels Africains in 1959. 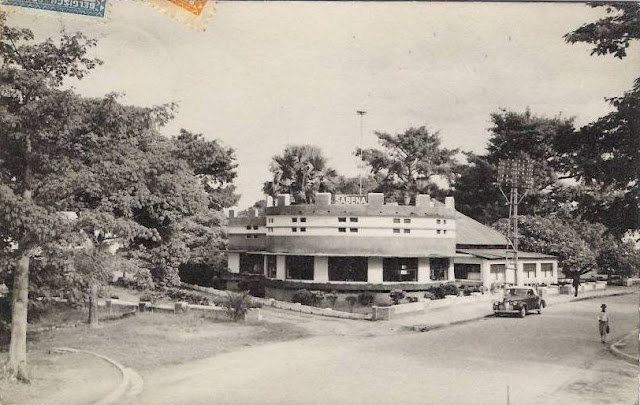 The Sabena Guest House - the car dates this image from the 1930s (author coll.).
As described in the earlier post, the original building where the Memling stands today was built by the Société industrielle et commerciale de l'Afrique occidentale (SICAO) around 1920, but which went bankrupt in 1924. Two years later, the Société Immobilière, Commerciale et Agricole (SICA), was created by Louis Promontorio. An early colonial figure, Promontorio worked for the Compagnie du Kasai and the Dutch House (NAHV), then opened his own firm in Leopoldville (Kintambo) in 1912. In 1924, he floated the Cie Urbaine des Transports en Commun du Stanley Pool. Promontorio put up a controlling interest of 128 of 200 500 franc shares in the new company, but it seems Leopoldville was not yet ready for public transit (Oct. 24, 2011). 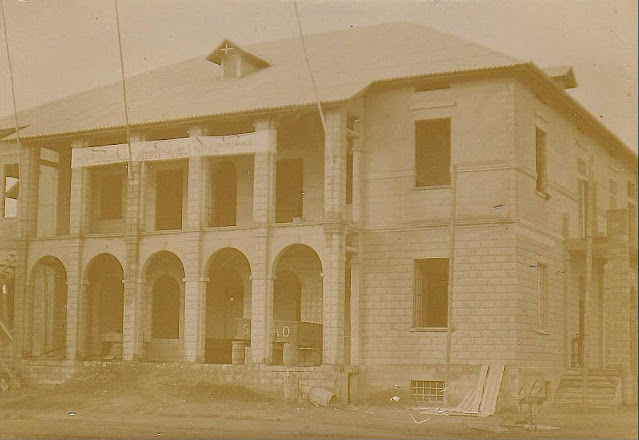 The SICAO Building under construction around 1919 (author coll.).
When SICA was founded in November 1926, Promontorio was granted 850 of 2500 Fr.1000 shares on the basis of a 0.44-hectare property (about an acre) in Kinshasa. He also received 1250 “Founder” shares, which gave him a majority of votes in the new company. Another, non-capitalized asset but referenced in the founding documents, was a contract with option to buy on a 50-hectare parcel at Kingabwa (part of contemporary Commune de Limete), upstream from Kinshasa. Following the designation of the Board of Directors, the company established its Congo headquarters at the Hotel de la SICA. This suggests that the hotel was in operation prior to SICA’s formation, most likely this was the SICAO property Promontorio contributed as in-kind capital. 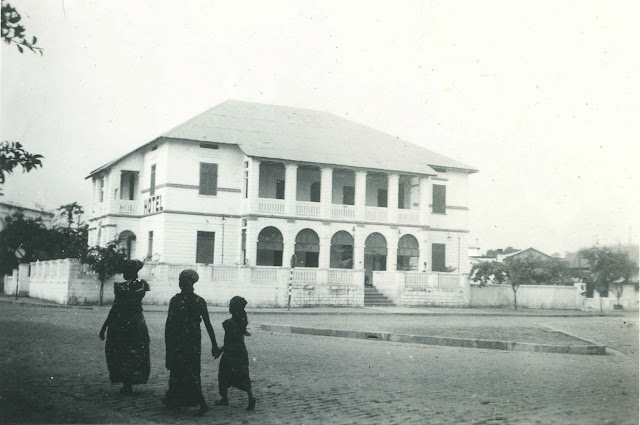 The Hotel SICA around 1940 (liberas).
The Hotel Metropole was operated in the 1920s by Felix Mertens, the same time as the SICA. A period photo shows a two-story building about the same size as the SICA, but with freshly-painted stucco walls rather than exposed brick and arched windows instead of square enclosing the second-floor balcony. The Metropole appears to have had a short run before succumbing to the Depression. The earliest references I’ve found date from 1924-25. In 1926, a cook at the hotel, D. Bandago, was diagnosed with tuberculosis by the local health service. The hotel-restaurant was recorded in Congo Revue 1927 and in 1928 it was listed as a destination for a taxi service from the Garage Mayo on the Place de la Poste (Mar.24, 2020). But by the beginning of the 1930s, the Hotel Metropole disappeared from the Leopoldville hotel scene. 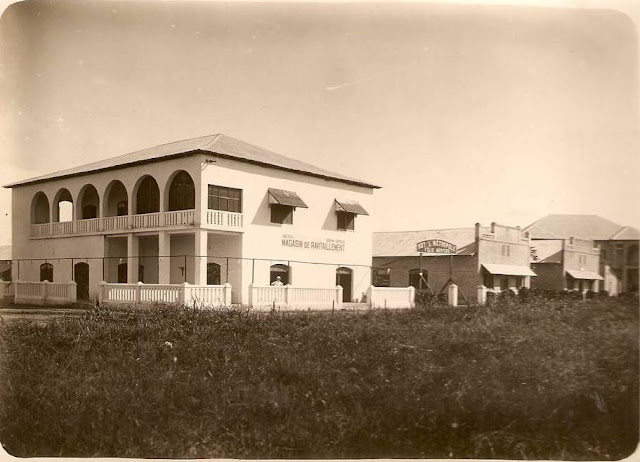 The Hotel Metropole in the 1920s (author coll.).
The photo showing the Metropole with “Hotel Sica” on the annex gables suggests the Metropole was taken over by the SICA. The photo of the Metropole above shows a building in the background which is obviously the SICA. This would place the Metropole at the corner of Ave. Stanley and Ave Bangala where the Residence Atlantic is today.
This acquisition of the Metropole by SICA is corroborated by photos in the Henri Guillaume collection at the Liberaal Archives in Ghent (liberas). Guillaume went to Congo in 1939 to work for the SICA. His photos show a variety of perspectives of the two buildings, including the annexes between the two hotels which housed European staff, and where Guillaume had an apartment. At the end of 1928, SICA’s balance sheet showed real estate valued at Fr.4.2 million, up from Fr.1.9 million the year before, suggesting acquisition of the Metropole. 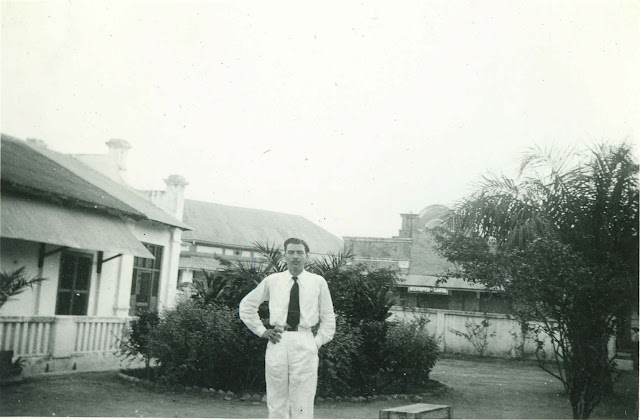 Henri Guillaume on the grounds of the annexes around 1939 (liberas). 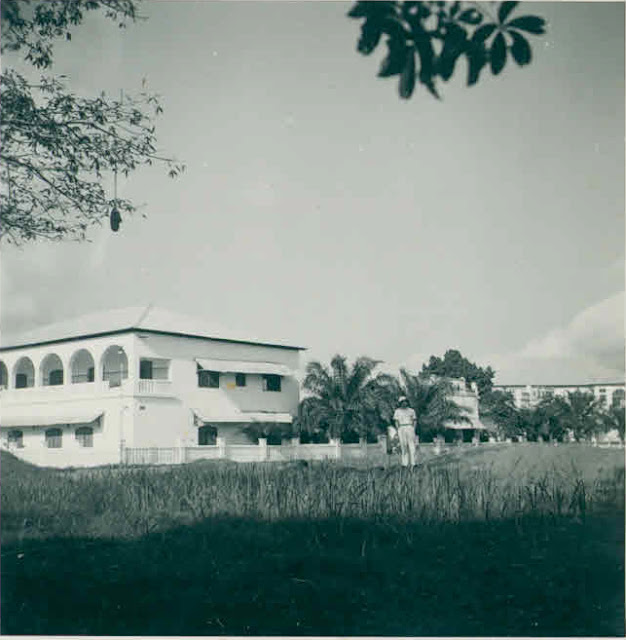 Guillaume outside the Metropole with Hotel SICA in background (liberas).
But what of Sabena’s claim that it built the Memling in 1937 (Hotel Memling)? First, Guillaume’s photos show that the two original hotel complexes were still extant in 1939. Second, there is nothing in the SICA’s annual reports from 1936 to 1958 that indicate Sabena had any investment in the property. Finally, the first multi-story wing of the SICA along Ave. Stanley must have been built in the early 1950s, when SICA decided to focus on its real estate activities in Kalina, Kingabwa and near the port. The first images specifically naming the Memling date from 1952, in a tourist brochure produced in Brussels. 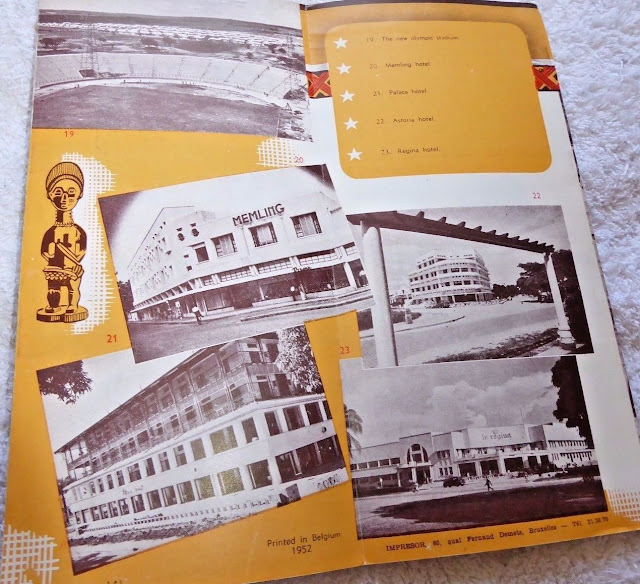 Some of Leopoldville's hotels in 1952 (author coll.) 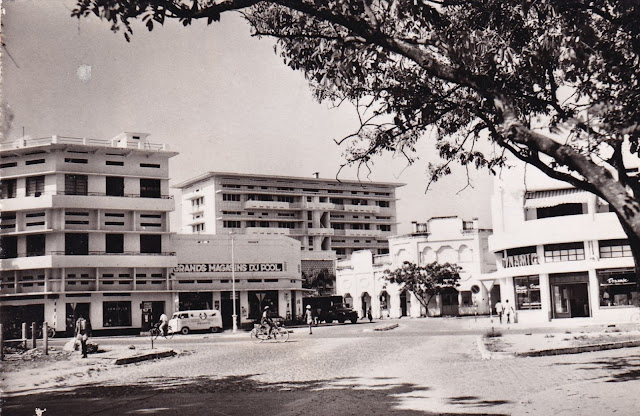 The Hotel Memling (R) incorporating the original SICA building (author coll.)
Another compelling indicator comes from Tom Marvel, US Press Attaché in Leopoldville during the war who returned to Congo in late 1945, and reported that he, “saw a friend at the Sica, then had lunch at Sabena, and met the four o'clock Fima (ferry) from Brazza.” In Sabena’s annual report for 1945, the company claimed revenues of Fr.3.7 million from operation of its guest-houses. Similarly, in 1949 the Sabena Revue, the airline’s magazine published a full-page advertisement for the Hotel Regina, the Storey-Day property around the corner on Blvd. Albert (Mar. 29, 2011). The ad promoted the Regina’s services for transportation and reservations upon arrival at Ndolo airport, and the amenities of its “Hôtel de Premier Ordre” – a renowned restaurant, bar, grill-room, patisserie and a catering service. No mention was made of the SICA or the Memling in the magazine. If Sabena was operating a major hotel downtown, or planning a major expansion, it would have received some coverage. Instead, the magazine touted the establishment of Sabena Guest Houses around the country. 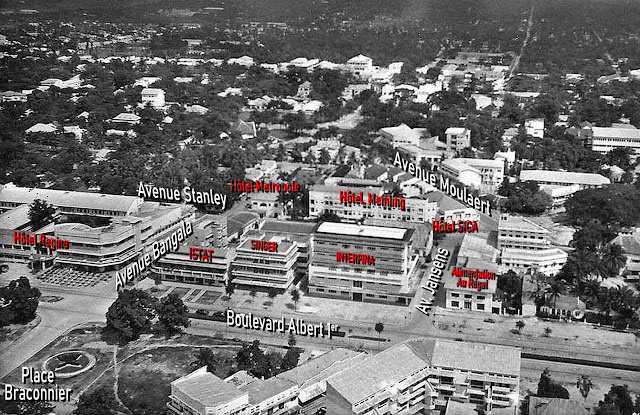 This photo from the mid-1950s shows the SICA complex along Ave. Stanley.
(Thanks to my colleague for labelling)
Absent any conclusive link of Sabena to the SICA in 1937, my initial conclusion stands, that the airline’s claim to the Memling is based on the 1959 merger which brought the SICA property and the Sabena Guest House at Ndolo under the same corporate framework. Certainly, the Art Deco architecture of the Guest House suggests its construction in the 1930s (Jan. 4, 2018). 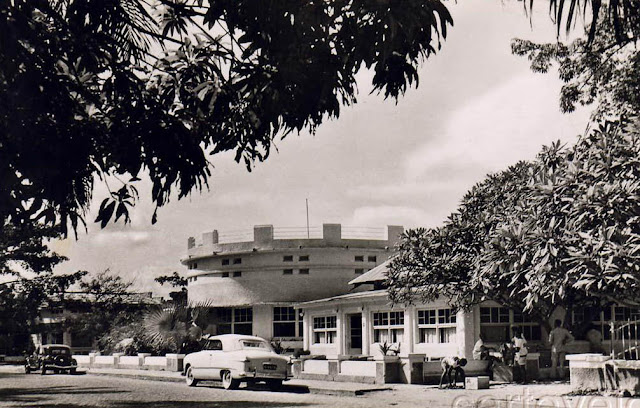 A view of the Sabena Guest House in the 1950s (author coll).
A significant restructuring of SICA took place after World War II. Louis Promontorio had died and his place on the Board taken by his son, Victor. Victor was born to a Congolese mother in Kintambo in 1912. When she died in 1919, Promontorio took him to Belgium. There he graduated with a law degree from the University of Louvain in 1935, making him among the first Congolese to obtain a university degree. In 1960, he participated in the Round Table meeting in Brussels that led to Independence, and was elected Senator from Equateur Province in the first Parliament in June that year. Promontorio (Seya Tshibangu under Mobutu’s Authenticité) became the first Congolese attorney admitted to the Leopoldville bar in 1963.
In November 1946, Victor resigned from the SICA board, and was replaced by Robert Cousin, representing the Société Mobilière et Imobilière Hosa (which provided much of the funds for the capital increase in 1948). Armand Regnier, Administrator and longtime Secretary General of the firm, resigned as well and was succeeded by Louis Lambelin, who became the Managing Director. Another board member, Hoebrechts, was replaced by Count Jean de Broqueville. The following year, Promontorio and his stepmother, ceded 8.8 hectares in Ndolo to the company. The firm nearly doubled its capital from 7.4 million francs to 13.4 million. In September 1948 capital was raised to Fr.40 million. That year, the value of land, buildings, material and furnishings was reported at Fr.13 million. In 1950 these assets had increased to Fr. 15.5 million, of which Fr.9.6 million was buildings. The following year, the value of buildings rose to nearly Fr. 20 million. This suggests that Wing A was completed in 1951 (rather than 1937) and it follows that the hotel began to be referred to as the “Memling” after 1952 (though why a 15th Century Flemish painter inspired SICA’s board is unclear). Notably, guidebooks and the company’s own letterhead continued to show the Memling as “Propriétaire Société SICA”. 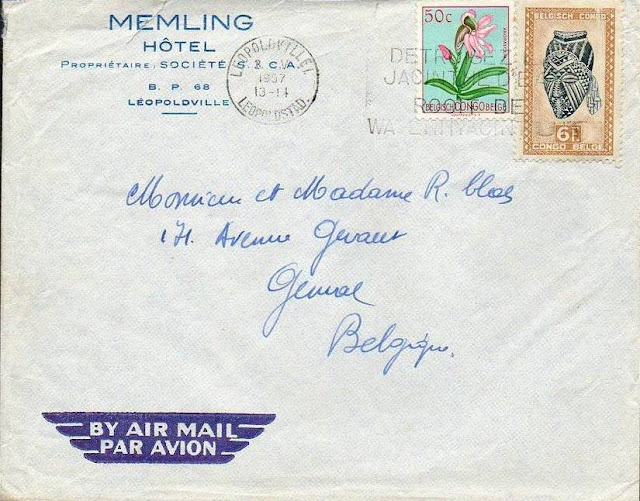 Letterhead showing ownership by SICA (author coll.)
Construction of the new three-story wing on Ave. Stanley required the demolition of the Metropole annexes. At the same time, the terrace of original SICA building along Ave. Moulaert was enclosed and the facade remodeled to tie in with the new structure. The main building of the former Hotel Metropole was demolished before Independence in 1960 and an office-residential building, the Residence Atlantic, was built. 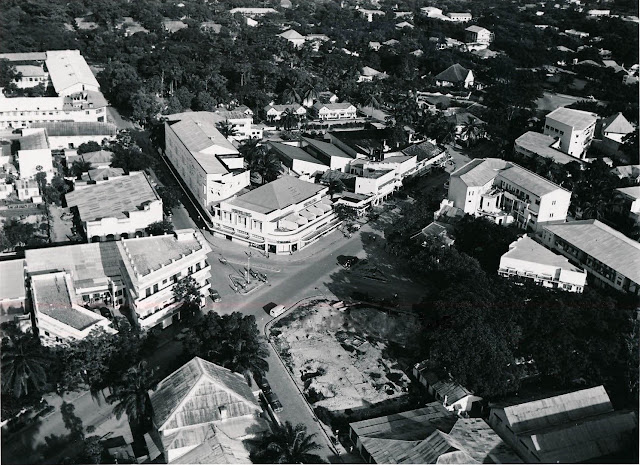 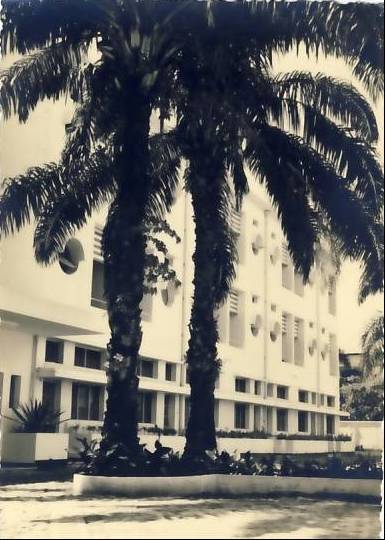 An interior view of the new wing (author coll.)
In 1955 the original SICA building was demolished and replaced with “Wing B”, an eight-story structure that angled from Ave. Stanley down Ave. Moulaert (Ave. Tchad), adding another 75 rooms, for a total of 114. 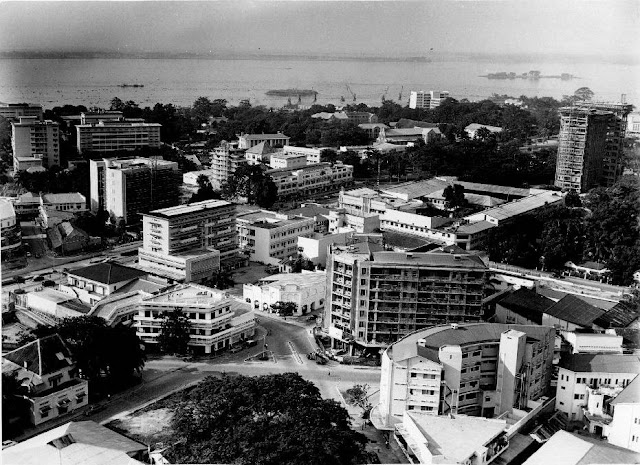 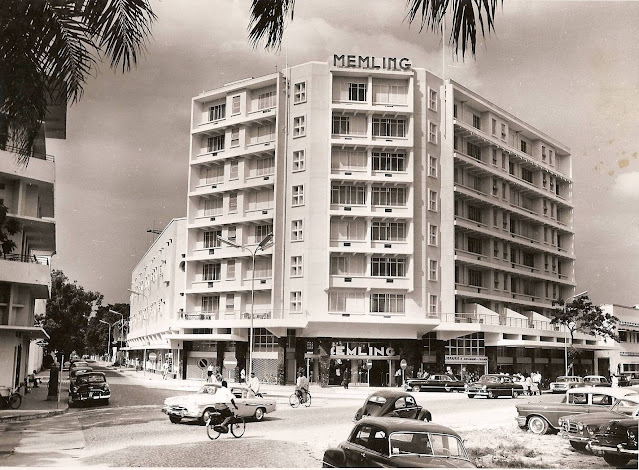 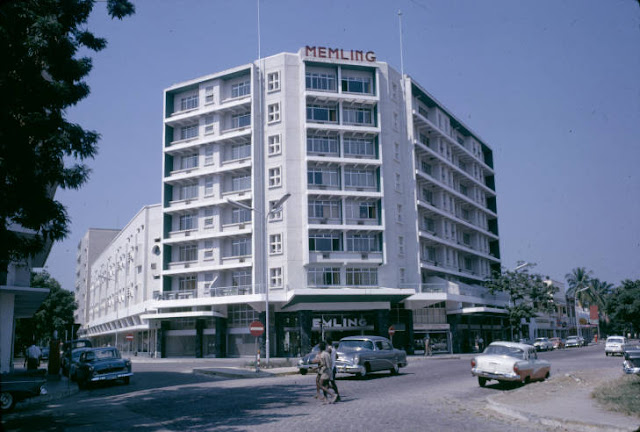 Hotel Memling 1961, note completed Residence Atlantic (Northwestern University, Foreman Coll.)
After Congo’s Independence June 30, 1960, the Memling became a primary center of political activity, inasmuch as it housed much of the foreign press and was located opposite the Hotel Stanley, where the United Nations established its initial headquarters (June 3, 2015). Competing political factions held press conferences or organized demonstrations in the street outside. In 1963-64, Wing C was built in the same architectural style as Wing B, extending down Ave Moulaert, bringing the total number of rooms to 174. 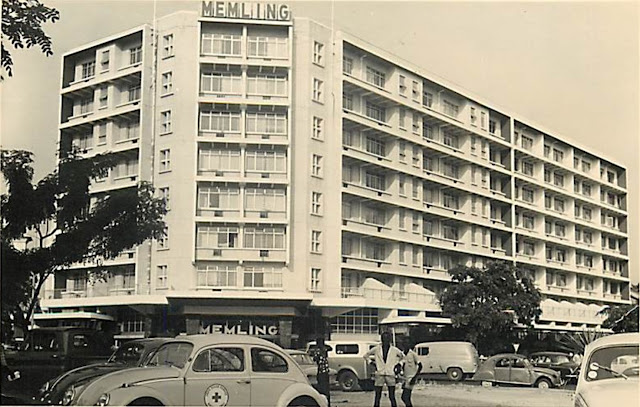 The Memling shortly after completion of "Wing C" in mid-1960s (author coll).
The Sabena Guest House was later acquired by Boniface Zoao, the last Bourgmestre (Mayor) of Kinshasa, who was replaced by a military governor in 1966. One of his relatives manages the property today and is slowly upgrading the buildings and grounds hoping to attract substantial clientele again. 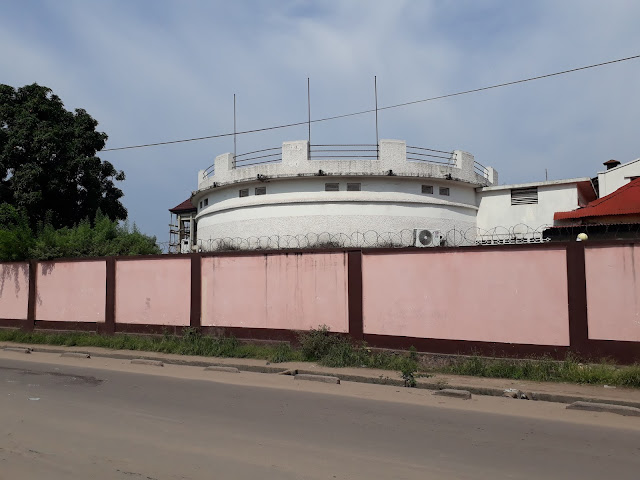 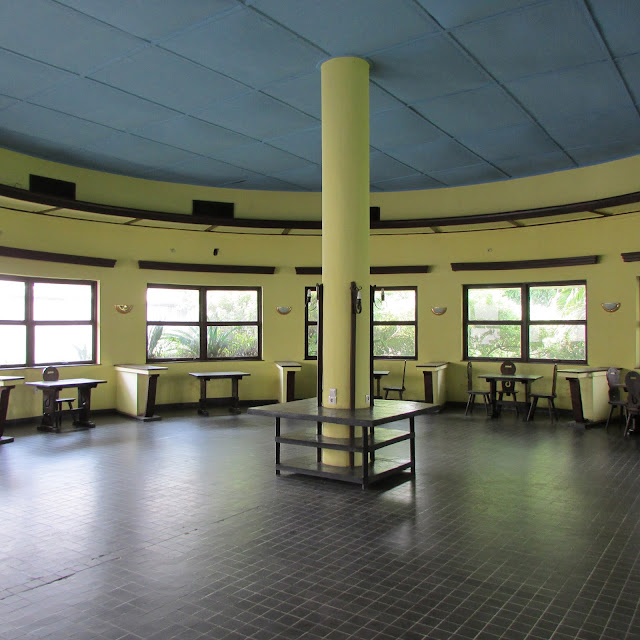 The restaurant of the Guest House (author coll.) 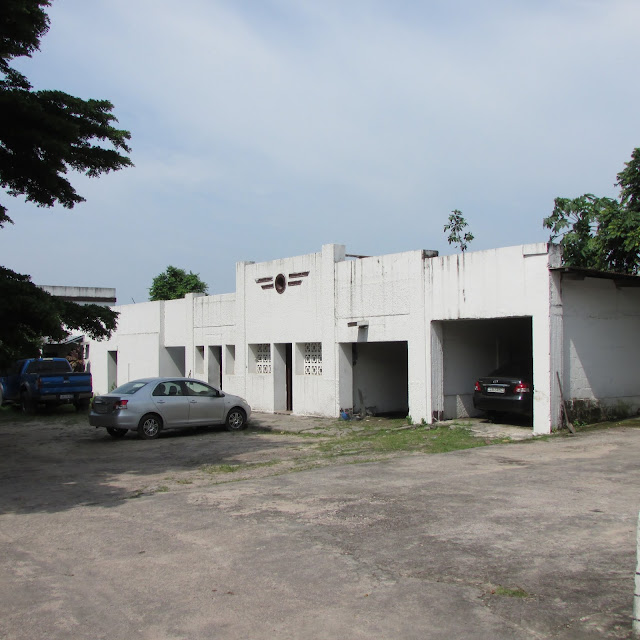 Note the wing motif over the garage (author coll.)
In 1985, the Memling's “Wing A” was demolished in a major renovation of the property. Eighty four years after Sabena’s alleged construction of the Memling, or 70 years after the construction of “Wing A” in 1951, perhaps it doesn’t matter much who built what when. The Memling remains both a historic and significant contemporary fixture in downtown Kinshasa. 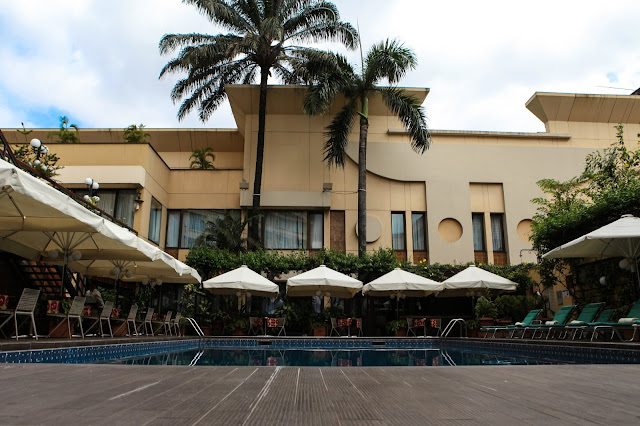 Interior view of the Memling of the wing replacing "Wing A" (trip advisor)
Sources:
Posted by Mwana Mboka at 3:02 PM