The Forescom Building was Kinshasa’s first skyscraper.  Completed in 1946, it excited interest among visitors to post-war Leopoldville and pride among the locals.  Its location at the juncture of two radiating streets on Place Leopold predicated a “flatiron” design and became one of the most popular subjects for colonial-era postcards.  Notwithstanding the “flatiron” allusion, it may also have been intended to evoke the river boats at the nearby port, and porthole shaped windows at the back of the building contributed to the nautical theme.
The Société Forestrière et Commercial du Congo (Forescom) was established in 1912 by Forminière, one of four major holding companies created by King Leopold II in 1906 to deflect attention from his personal rule and exploitation of the Congo (Union Minière du Haut Katanga, the Compagnie du Chemin de Fer du Bas-Congo au Katanga (BCK), and the American-Congo Company were the others).  Forminière enjoyed major concessions in the diamond fields of Kasai, centered around Tshikapa, and managed the Bakwanga (Mbuji Mayi) mines for a BCK subsidiary.  Forescom was created to exploit the firm’s timber reserves in the Congo basin, notably around Lac Léopold II (Mai Ndombe). 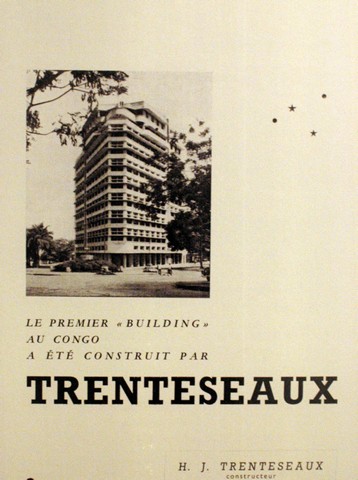 The contractor for the building was Henri Trenteseaux, a Belgian architect who moved to Congo in 1939 and established his own construction firm in 1942.  The architect, however, was R. Fostier, and who despite producing such an outstanding design, evades casual research efforts on the internet.  The engineer was R. Hins, possibly R.A. Hins, who was the colony's principal public works engineer during the war. Construction work began in 1945 and was completed the following year.  The new building even featured air conditioning, a rarity in the tropics at the time.

Not surprisingly, the building immediately became the address for professionals, commercial firms and diplomatic missions. The Canada Trade Commission moved to the Forescom from Hotel A.B.C. in 1948, followed by the Danish Consulate in 1954.  The South African Consulate was established there in 1959, and the Israeli and Taiwan Embassies opened offices there after Independence.  The British Council maintained its library in the building in the late 1960s.  Commercial tenants included the Bunge agri-business firm (1948), Charles Lejeune Insurance (1949), colonial firms Anversoise and Cafecongo (1955) as well as Banque Parisbas, Congacec and Bell Telephone (1956) and the Royal Touring Club.

The height of the building was a matter of speculation for many observers.  It’s ten stories were variously described as 9-story (Ahl, 1956), 11-story (Thompson, 1954), even 22-stories (Phillips, 1949).  Some of the confusion among Anglophones may have resulted from the Belgian custom of begining the numbering of floors above the rez-de-chaussée, as Wikinshasa explains: commercial space on the ground floor, seven floors of offices, and the top two floors comprising a night club and restaurant.

Trenteseaux was a partner with Desmedt in the refurbishing of the Hotel A.B.C. (renamed the Hotel Palace, see March 27, 2011), undertook construction of Le Royal building on the Boulevard in Kalina (which became the UN headquarters in 1960), operated a stone quarry at Kinsuka and the Cometal and Metalco construction material supply firms with his partner Huysmans in the 1950s.
Following Mobutu’s Zairianization campaign in the early 1970s, the building became known as Nioki, site of Forescom’s major timber processing facility on Lac Mai Ndombe.  In 2006, the Taj Tandori Restaurant opened on the penthouse floor.  Chez Patrick restaurant was reported to have moved there in 2008.  The BIAC bank is a long-term tenant on the ground floor.  Many attorneys have offices in the building.