The unrest and uncertainty that followed Independence in 1960 put a damper on development of the hospitality sector in Leopoldville -- the Memling’s final expansion phase in 1963 notwithstanding (See Mar. 29, 2011).  Two new hotels that opened at the beginning of the 1970s demonstrated a change in perspective on the prospects for the economy, but also an indication that the Congolese state was prepared to allow multi-national corporations to challenge Belgian commercial hegemony. 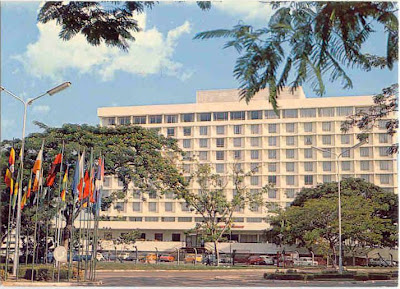 Shortly after Mobutu’s second coup in November 1965, Pan American Airways and the US government began negotiating with the new regime for a new hotel in Leopoldville.  Pan Am had been providing air service from the US since 1941 (see Jan. 9, 2011) and by 1965 maintained a weekly jet flight from New York. Pan Am’s subsidiary, Intercontinental Hotels Corp., proposed a 50-50 partnership with the Congolese government.  In 1967, USAID approved a $2.5 million loan to build a 260-room hotel and January 4, 1968 (as Vice President Hubert Humphrey visited the capital) the loan was awarded to the Société des Grands Hotels du Congo.  A parcel of land was found in Kalina between the Clinique Reine Elisabeth and the Athenée.  The Bechtel Corporation won the construction contract and on October 3, 1971, President Mobutu inaugurated the new hotel. 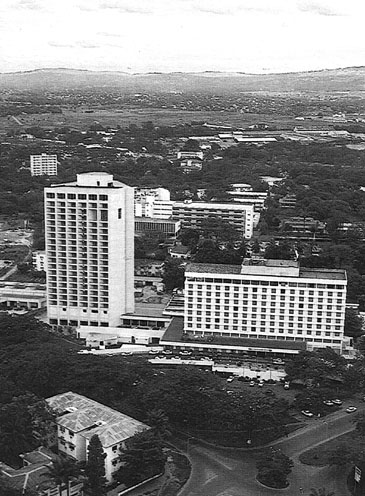 The hotel embarked almost immediately on an expansion project to put up a 24-story hotel and apartment tower on the site.  In February 1973, Bechtel broke ground on the project jointly funded by Intercontinental, the Government of Zaire and Société Immokin.  The new addition was expected to be completed by the end of 1975, but construction took another decade.  When the tower opened in 1986, the interior design firm Wilson Gregory Aeberhard took into account that the hotel was a major meeting point in a modern African city. 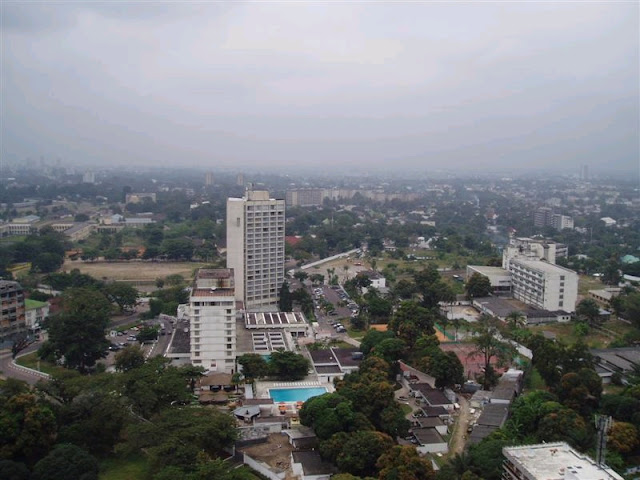 The other hotel which opened at the beginning of the 1970s was the “Okapi”, constructed by the Lonrho Group on a hilltop in Binza overlooking the city.  Lonrho (London and Rhodesian Mining and Land Company, Ltd.) was a firm established in 1909 and led in the late 1960s by maverick investor Roland “Tiny” Rowland. Rowland was most interested in the contract to build a railway link between the Bas-Congo-Katanga (BCK) railway and the Kinshasa-Matadi line, but invested in the power sector and other assets of the Cominiere group.  Lonrho’s tenure in Congo was short-lived.  After the “Zairianization” economic nationalization in 1973, Lonrho’s assets were acquired by Litho Moboti, Mobutu’s uncle, one of the “barons” of the regime.  During the “pillage” in September 1991, the Okapi was looted and reduced to rubble.  Kabila’s forces squatted in the ruins after 1997.  The firm continued to maintain an interest in Congo and in March 2011 opened the renovated Hotel Karavia in Lubumbashi.
﻿﻿﻿ ﻿﻿
﻿﻿﻿﻿﻿ 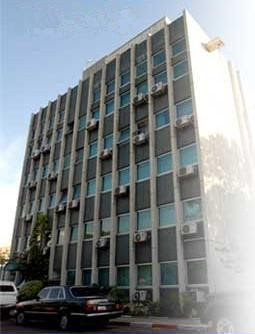 Two additional hotels promoted by the Mobutu regime were hampered by public ownership.  On the 11th anniversary of the Second Republic in November 1976, Mobutu inaugurated the Hotel de la Voix du Zaire on the grounds of the telecommunications tower built by the French government.  The hotel is since called the Hotel Invest de la Presse. 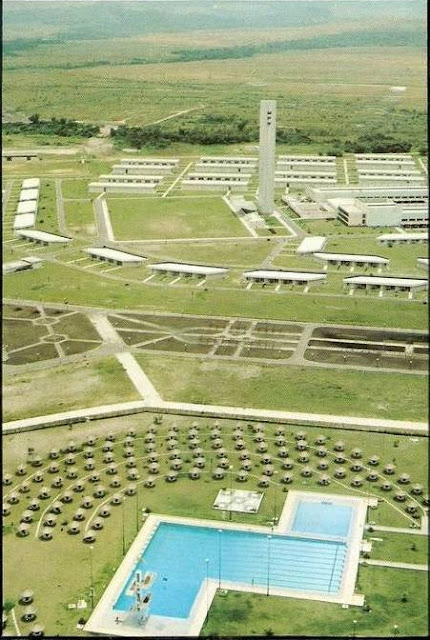 Following proclamation of the “Manifeste de la Nsele” as the charter for his unique political party, the Mouvement Populaire de la Revolution (MPR), Mobutu began to develop the Nsele site as the intellectual center of the regime.  Institut Makanda Kabobi was established in 1974.  The facilities were mostly used for party functions, but the Olympic-sized swimming pool was open to the general public.  In March 2007, the facility was only a shell of former buildings.

The “Inter” remained a focal point of Kinshasa society, even as the fortunes of the country declined under Mobutu’s mis-management.  In “The Footsteps of Mr. Kurtz”, Michela Wrong describes hotel’s decline in the mid-90s.  As Kabila’s forces converged on Kinshasa in May 1997, the ruling elite holed up there before fleeing to Brazzaville.  In 1998, the 30-year agreement with Intercontinental Hotels came to an end and the hotel became the Grand Hotel de Kinshasa.  The challenge was return the facility to its former luster.  In October 2003, the “Grand” celebrated the 32 years since its opening by acknowledging it had $50 million outstanding debts from creditors.  Nonetheless, the original building received a complete makeover in 2009.
Posted by Mwana Mboka at 6:11 PM