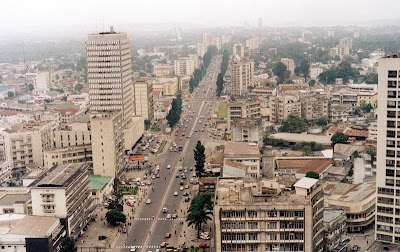 Kinshasa’s Boulevard du 30 Juin is probably one of the best-known features of the city.  While perhaps not as iconic as the Eiffel Tower in Paris or the Pyramids in Egypt, it nevertheless defines the city for both Kinois and visitors.  Running seven kilometers from the Gare Centrale to Rond Point Socimat, it runs parallel with the Congo River, connecting eastern and western communes of the city, and services the central business district, most government offices as well as the international community of diplomatic corps and foreign NGOs.

Historically, contemporary urban Kinshasa developed out of the Belgian settlement established by Henry Stanley in 1881 at Leopoldville (Kintambo-Ngaliema), to the west of downtown. Two years later, however, a second post was established by Stanley’s organization a few kilometers upriver at Chief Ntsuvila’s village of Nshasha (Kinshasa-Gombe).  At that time, travelers coming from the coast reached Leopoldville via the caravan route over the mountain through contemporary Binza, but when the railroad from Matadi reached Stanley Pool in March 1898, the line circumvented the mountain near Petit Chutes at Kimwenza and followed the flat floodplain along the river from Ndjili to Ndolo (Kinshasa) and terminating at Leopoldville (where the Chanic shipyards are today).  The two centers needed to be in touch and the railroad provided the link.  Since the railway only ran every other day, most were obliged to walk or travel up the river by if a steamer was available.﻿﻿﻿﻿﻿﻿

﻿In 1912, District Commissioner Moulaert, who was already advocating for the capital to be transferred from Boma to Leopoldville, unified the districts of Leopoldville, Kinshasa, Kalina and Ndolo into one administrative unit.  In the same year, a road was built between Leopoldville and Kinshasa.

As the commercial hub of the colony, Kinshasa was growing faster than Leopoldville, and plans to relocate the port from Leopoldville to Kinshasa promised further growth.   Consequently, the area between the river and rail line was becoming built out. Reconstruction of the rail line from Matadi to Standard Gauge in 1923 provided an opportunity to relocate the rail line about 1 kilometer south of the original line (see photo Jan. 6, 2011).  That year, as well, the Leopoldville-Kinshasa agglomeration was elevated to an “Urban District” and the colonial government decided to move the capital from Boma.  Given the space constraints in both Leopoldville and Kinshasa, the administrative capital would be built in an undeveloped area called Kalina, between the two centers comprising a classical plan of radial avenues and “garden city” layouts for the residential areas.


﻿ As the new southerly rail line was completed over the next few years, the original railway infrastructure along the right of way was relocated, clearing the way for a major boulevard.  A new passenger station was built at Leopoldville (Kintambo Magasins) in 1925.  In November 1928, plans for a Gare de l’Est were approved, providing for relocation of the Kinshasa station from the center of the Kinshasa commercial area (where the future Hotel Regina would be built).  At the end of December 1931, with the realignment complete, the railway station at Leopoldville was no longer the end of the line, though architectural plans for the Gare de l’Est were yet to be approved (all other stations along the reconstructed line were rebuilt in the opulent style of Belgian coastal villas of the era).  This situation prevailed throughout the decade, most likely due to budgetary constraints of the Depression, and it was not until 1938 that Colonial Public Works Engineer Rene Schoentjes was tasked with designing a passenger station.  Plans for an Art-Deco structure were sent to Brussels for approval in July of the following year.
﻿﻿
﻿﻿By this time, the concept of a major boulevard along the former railroad right of way was coming together.  June 30, 1939, a monument to the late King Albert I, intended to anchor the new thoroughfare, was inaugurated on the new Place de la Gare.  The invasion of Belgium in May 1940 and global conflict of World War Two overtook these priorities, but by the beginning of 1942, the boulevard had reached Avenue du Port (the intersection at the current Grand Poste).  The newspaper “Courier de l’Afrique” noted that the boulevard was shaping up, especially since Istat was planning to build a commercial structure next to the Paul Storey-Day’s new Hotel Regina (succeeding the Pension Paula across the boulevard on the old Place de la Gare).  The city council approved plans to pave this section in concrete.  By the end of the war, this section of the boulevard was paved, as were several other major arteries, allowing the development of public transit for African workers, who were only allowed in the European city under certain restrictive conditions. 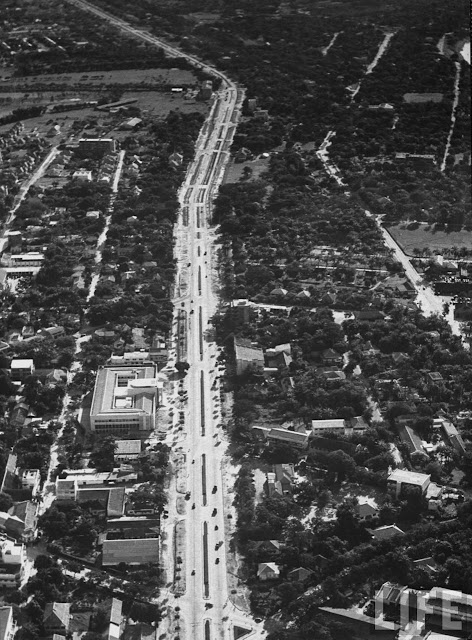 At the end of the decade, a major Ten Year Plan was developed for the colony and Leopoldville was to benefit from a design to give the “whole urban entity an imperial grandeur” with monumental axes.  This planning became mired in the politics of segregation and creation of spatial “neutral zone” barriers between European and African sections of the town (which the relocated rail line of the Twenties intended to define), but by 1953 the thoroughfare to the west extended five kilometers as far as Kalina.  A lavish spread in LIFE Magazine in May described Leopoldville as “boasting an American-style thruway, the broad three-mile Boulevard Albert”.

As the boulevard passed through Kalina, other monumental structures including the twin Sabena buildings (designed by Claude Laurens), the Royal residential-commercial building (built by Forescom Building contractor Henri Trenteseaux) and a Le Corbusier-inspired apartment complex for civil servants were under development.  By 1955 a meeting of the Rotary Club noted that the boulevard was recently completed.  The dual highway, divided by landscaped traffic islands, was planted with Limba trees along its borders, a species which grew tall with few limbs to obstruct the view. 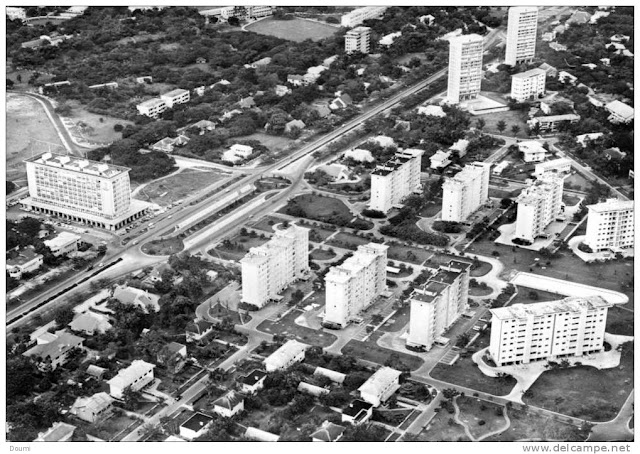 After Independence, further development along the boulevard changed little, except for occasional demonstrations in front the Royal Building, which was the headquarters of the UN operation in Congo.  June 30, 1963, the boulevard was renamed Boulevard 30 Juin to commemorate Congo’s Independence Day. 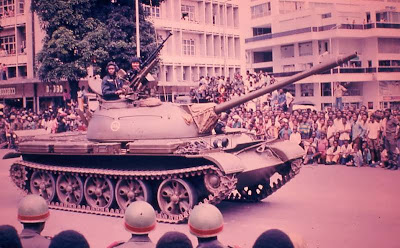 In 1974, following President Mobutu’s state visit to China the previous year, the traffic islands on the section of the boulevard from the Gare to Ave. Nzongo Ntolo (at the intersection of the current South African Embassy) were pulled up so tanks and other military formations could parade past at Independence and new regime celebrations.

By the late ‘90s, the Limba trees were aging, often toppling onto the boulevard after heavy rains. City government would cut these down while other commercial proprietors along the way cleared the trees to provide parking for their businesses. 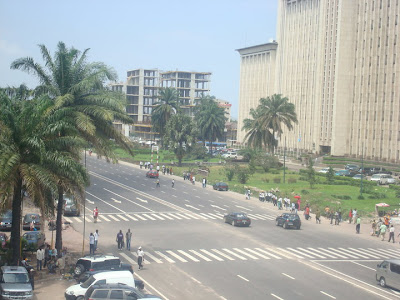 In 2007, as part of the “Cinq Chantiers” infrastructure program of the newly-elected government, a Chinese company was awarded a contract to rebuild the boulevard.  All remaining trees were cleared to make way for an 8-lane roadway, completed in 2010.

When the lane dividers were painted, Kinois were surprised to find that drivers actually respected them and would stop for the zebra-striped pedestrian cross-walks. 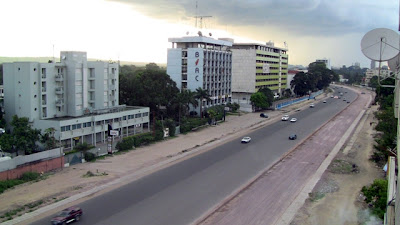 By the time of the celebrations of the 50th anniversary of Independence in June 2010, the boulevard was transformed.  Major new construction was underway and plans are proposed to extend the boulevard to Kintambo Magasins.  At the Place de la Gare and the granite base of the former monument to Albert I, a popular plaza was created where the curio market and public transport terminus had been.  The Rakeen Group, an Emirates-based company constructing a major complex on the Place de la Gare, proposed plans to transform the Gare into a major commercial-residential complex. 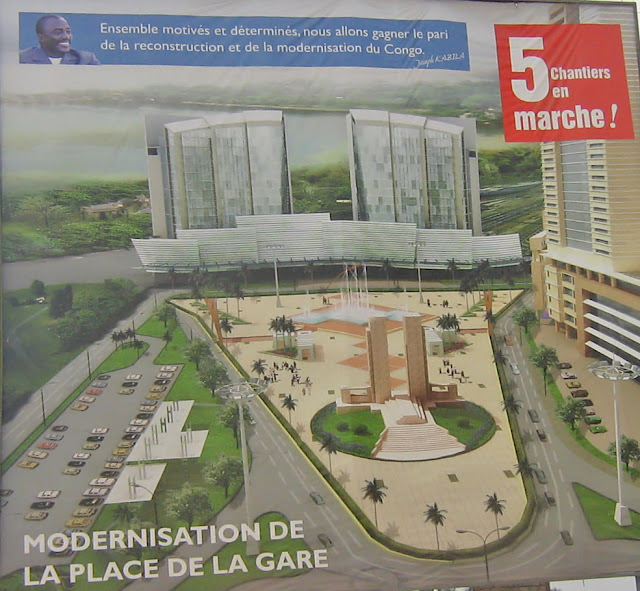 The future of 30 Juin will depend on improvement of additional east-west arteries across the city so that traffic is not funneled into the CBD to get from one part of town to the other.
Posted by Mwana Mboka at 4:36 PM