The first American Consulate in Leopoldville opened in July 1929 under Vice Consul Arthur F. Tower, a fairly junior Foreign Service Officer whose previous postings had been in Warsaw and Gdansk, Poland.  However, the US had a long-term diplomatic relationship with the Congo, being one of the first nations, in April 1884, to recognize the International African Association, Leopold and Stanley’s predecessor to the Congo Free State.  From the establishment of the Congo Free State after the Berlin Conference in February 1885, the US maintained official representation in the colony, first at Vivi (across the river from Matadi) and subsequently at Boma, which was the capital of the Congo until the late 1920s (See January 6, 2011 posting – “New Capital of the Colony”).  The US’ primary interest was a significant American Protestant missionary community working throughout the country and ensuring that trade opportunities were open to American businesses.


Arthur Tower’s assignment in Leopoldville was short lived.  Within a year, the Consulate was closed, victim of cost-cutting measures resulting from the Depression.  It was not until 1934 that the Consulate reopened under John Richardson, somewhat more senior than Tower, whose previous posting was Winnepeg, Canada. In November 1936 Edmund J. Dorsz succeeded Richardson.  He had also served in Warsaw and his marriage in Leopoldville in September 1937 to Corrilla Bevan, the Warsaw Consul General’s daughter, was a major social event.

The outbreak of the Second World War brought Congo into sharp focus for the United States.  Japan’s conquest of Southeast Asia cut access to a number of important agricultural and mineral resources that the Congo could supply  (such as palm oil and tin), but more importantly, the colony had immense deposits of copper and uranium, critical to the American war effort. Other geopolitical factors influenced US interest in Leopoldville. In August 1941, the US and UK agreed to establish air routes across western and central Africa to compensate for potential losses in North Africa.  On November 16, 1941 the crew of the first Pan American “Clipper” flying boat and Belgian dignitaries were received at the US Consulate.

Official American presence in Leopoldville expanded after Pearl Harbor and 1942 saw the arrival of a U.S. Army Engineer Battalion to expand Ndolo airport, a hospital unit to support the troops, and the first OSS agents (predecessor to the CIA).  The Consulate opened a library.  Given the numbers of VIPs to invite, the Consulate hosted the 4th of July Reception at the Cercle de Leopoldville.

In March 1943, the US obtained a plot of land, slightly less than an acre, for construction of a Consulate.  Congo’s importance to the war effort was reflected the presence of the Foreign Economic Administration (FEA, a predecessor to USAID) and the Bureau of Economic Warfare (BEW), whose aggressive representative, a Texan named Hickman Price, ruffled feathers throughout the official community in Leopoldville.


In July 1944, the Consulate was raised to a Consulate General.  An architect from the Department of State was dispatched to prepare plans for the Consul General’s residence on the river opposite Brazzaville.

After the war, despite the closure of FEA and BEW offices, the US diplomatic presence in the city remained significant.  Rented facilities were inadequate.  In 1953, the Consul General testified to a Congressional committee that he was ashamed, “the general public regards the whole set-up as a joke”.  In the summer of 1954, the State Department began planning a new Consulate General building and staff housing using in-house architects.  However, the Architectural Advisory Committee (AAC) found the design unacceptable, “ungracious and uninviting” and the overall design inappropriate for the tropics.  The architects complained that they found no local architecture or history they considered useful to their needs.  In a few months a contract was awarded to Weed, Russell, Johnson Associates of Miami to develop plans for the Consulate.

Coincidently, the Chair of the AAC was Colonel Harry McBride, former Consul at Boma during the First World War (and whose wife published a florid account about domestic life there in the February 1937 National Geographic).  Although McBride had become the Administrator of the National Gallery of Art in Washington, DC after leaving State in 1939 (overseeing the opening of the John Russell Pope designed Gallery in 1941), was widely traveled and familiar with the conditions and needs of the Foreign Service, the architects tended to dismiss his opinions since he was not an architect himself.

Nonetheless, the planning moved forward.  Weed, Russell, Johnson commissioned Pietro Belluschi (Dean of the Architecture School at MIT) for the design work.  The 1950s was the heyday of the “International Style” and to incorporate the popular glass curtain wall, the architect used decorative block panels to screen the windows for the tropical conditions.  In August 1956, an architect on a tour of Africa commented favorably on the new Consulate building that would replace the “rattletrap” housing consulate staff and USIS, “in line with design theories now happily in force at State”.


The Consulate was erected on the NE corner of Avenue Wahis and Aviateurs on land that had served as the football field of nearby Saint Anne parish and thereby escaped development in the prime commercial district of the capital.

Portugal was building a Mediterranean-inspired Consulate next door.

Governor General Petillon inaugurated the four-building complex January 2, 1958.  At the end of the year, Bakongo activist Joseph Kasavubu visited, requesting US support, only one month before riots in the city set the stage for Independence in June 1960.


On the eve of Independence, Robert Murphy, the US Ambassador to Belgium and representing the US at the Independence ceremonies announced that the Consulate would become an Embassy.  Consul General Tomlinson would become the Charge and the Eisenhower Administration nominated Clare Timberlake as the first Ambassador.

A Marine Guard detachment was assigned to the Embassy and a plot for the Marine House was obtained on a lot perpendicular to the Embassy, facing Ste. Anne behind the Portuguese Embassy. 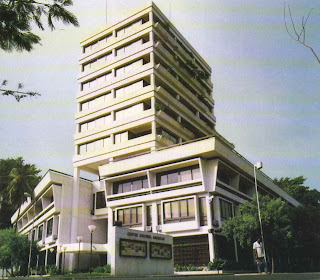 In the 1980s, USIS and USAID moved into new premises across from the Gare Centrale.