After WWII, the colonial government began to appreciate the potential of tourism as an economic factor, but also as a propaganda tool to showcase Belgium’s achievements in the Congo.  In 1949, the Office de Tourisme du Congo Belge et Ruanda-Urundi published the first Guide du Voyageur du Congo Belge et Ruanda-Urundi.  Two English editions were produced in 1951 and 1956.  This brochure on Leopoldville, produced in 1956, proposed two tours of the segregated city, one native and one European, one black and one white.﻿ 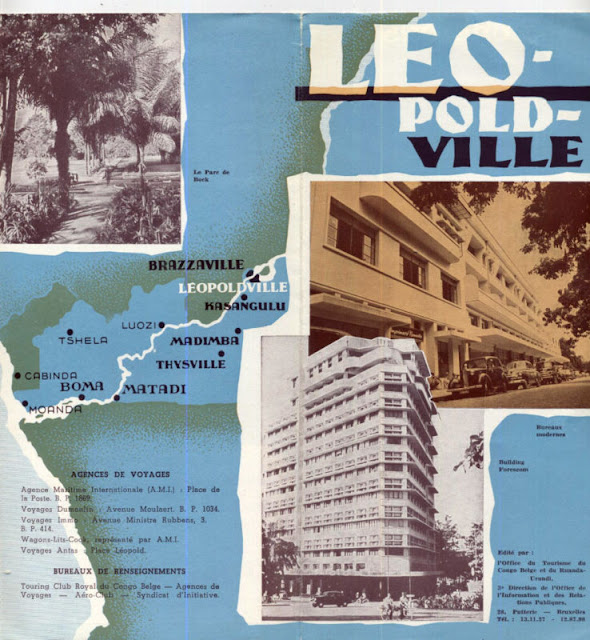 Tourist facilities included first class hotels and restaurants.  One guide advised visitors to bring a sweater for evening dining, something Kinois would puzzle over.
﻿ 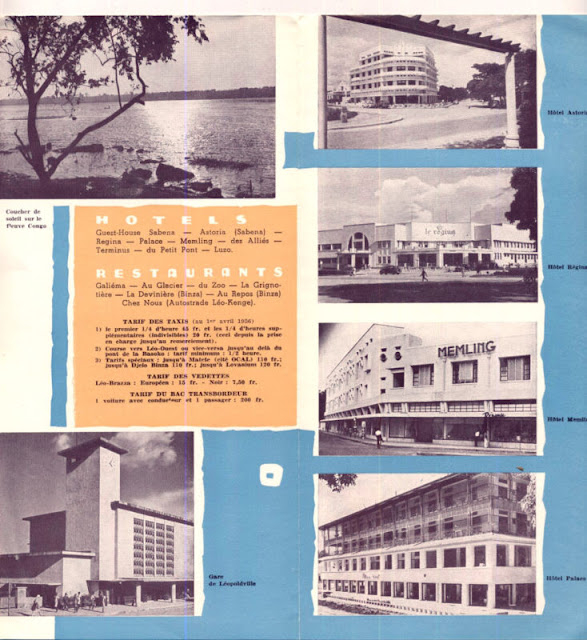 The estimated time for the tour (see below) of the Congolese township (cité) was about two hours, which the guide recommended to do in the morning.  Starting at the Native Market (open daily from 6:00 to 11:00 am), past Parc de Bock and the Zoo, the Foyer Social  (Community Center) and the Parc des Sports General Ermens located on the grounds of Stade Reine Astrid.  Some 250,000 Congolese lived in the cité (comprising the contemporary Communes of Barumbu, Kasavubu, Kinshasa and Lingwala) but the brochure noted a modern residential district for Congolese was under construction west of town (Bandalungwa). 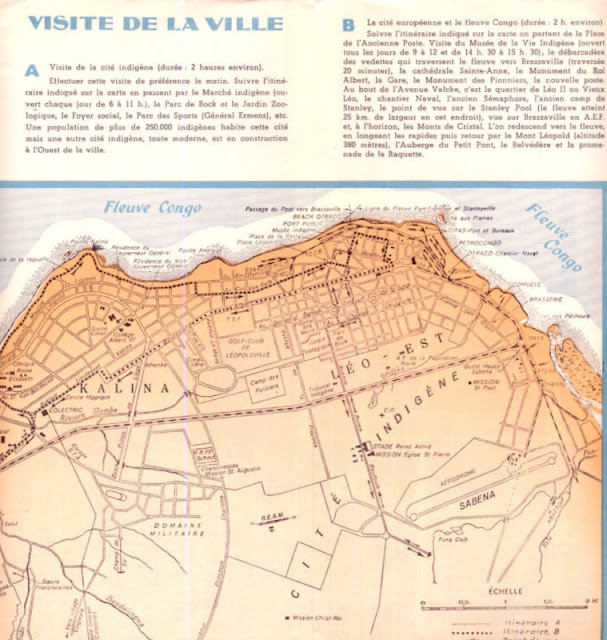 Marché Publique. The “Native” or “Public” market was inaugurated by Vice Governor General Paul Ermens and District Commissioner Roger le Bussy in January 1944.  The new market was relocated a few hundred meters southeast of the “covered” market to which the market had been moved in 1933 from the old railway right of way to make room for the Boulevard (see Jan. 23, 2011).   Both relocations reflected increasing growth and pressure of the European commercial district on the African cité.  In contrast to the Mediterranean inspired “Marche Coupole” (today’s African Lux) the new market was a stolid Art Deco enclosure surrounding rows of concrete stalls.  An estimated 1200 vendors catered to some 10,000 buyers daily.


While some Europeans objected to having to shop with Congolese (preferring the dual market system operating in Elisabethville in Katanga) the Comité Urbain was reluctant to build public facilities in the cité, preferring to use the market, the park and Zoo as a physical buffer between the two communities.   However, the entrance to the market was oriented to face the cité (the development of the Zone Neutre will be the subject of a later post).    In November 1948, the colonial authorities established a restaurant in the market where Congolese could  enjoy meal for 4 francs (about 10 cents at the time).  President Mobutu demolished the old market in 1968 and built the current “Grand Marché” on the same site.


Parc Fernand de Bock was located across Ave. Marais from the Marché in a eucalyptus plantation created in the early 1920s, most likely to provide fuel wood for the railway.  De Bock was the District Commissioner for Leopoldville from 1929 until the mid-1930s.  The park included a botanical garden with a number of rare Congolese species. 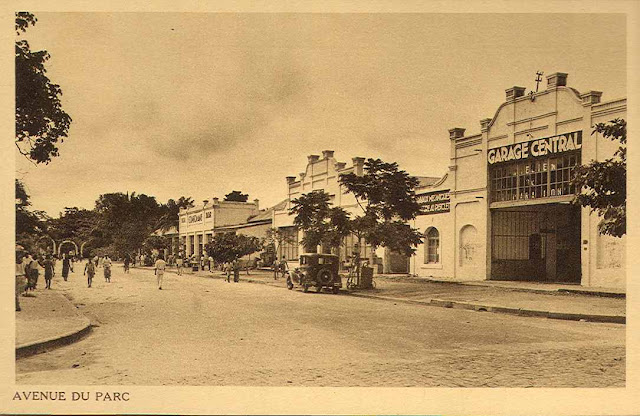 Another notable feature of the park was a cement replica of Brussels’ “Mannequin Pis” donated to the city in 1923 by a long-term Italian resident.
The entrance to the park was from the European side of town through gated archways.  The park was often the venue for public events, such as the Congo-British War Fund “fancy fair” in July 1941 and the Victory in Europe celebration in May 1945.  In June 1946, movies were screened for educated Africans and in December 1948 Africans were introduced to European-style dancing.  A play by Albert Mongita was performed in Lingala in 1952.  In April 1960, less than two months before Independence, an interracial dance party was hosted in the park.  In 1971, during the “Authenticité” campaign, the park was renamed “Parc de la Revolution”.  In recent years, the park was neglected and became home to street children and prostitutes.  In 2010, the municipality undertook a clean-up campaign, preserving some of the past luster.


﻿﻿﻿﻿The Zoo (Jardin Zoologique) was created in 1933 west across Ave. des Palmiers (later Prince Baudouin, now Ave. Kasavubu) from Parc de Bock.  It opened July 17, 1938 with another Art Deco entryway as well as a restaurant in the same architectural style at the far end of the complex.  In June 1939 a series of animal postage stamps were issued to provide Fr.300,000 to benefit the Zoo.  A fifth anniversary observation during Prime Minister Pierlot’s visit included an exposition at the Zoo and a soiree at the restaurant.

﻿ In August 1954, the Zoo received its first Okapi, the elusive creature discovered in the Ituri Forest in northeastern Congo at the turn of the century.  The Zoo also featured a Chimpanzee that mooched and smoked cigarettes cadged from visitors.  King Baudouin visited the Zoo during his successful May 1955 tour of the colony.  The fortunes of the Zoo declined in 1956, however, and there was talk of closing its doors and ceding a third of a hectare of the complex to the adjacent Congolese Hospital.  To boost visitors, the Zoo tried such ploys as announcing the arrival of new animals on April 1st and filling the enclosures with stuffed toys. 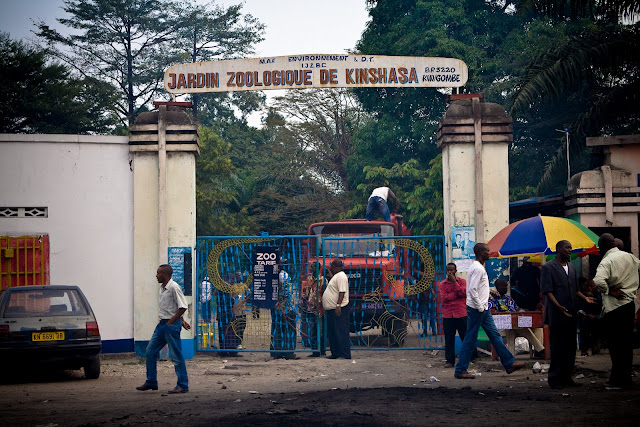 An adjacent  five hundred-seat cultural center was a favorite venue for meetings and conferences catered by the Zoo Restaurant.  After the new Parliament was elected in 1961, Premier Adoula hosted his peers there.  In the late 1960s President Mobutu began to develop the Presidential Zoo on the slopes of Mt. Ngaliema and the Zoo further declined.  The Institut National des Arts rehabilitated the Cultural Center in 1988.  In October 2009, it was announced that the French Embassy would rehabilitate the Zoo. 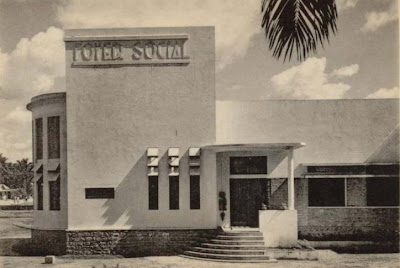 Foyer Social.  In keeping with its paternalist approach, the colonial state provided limited social welfare services for Africans, though initially through intermediary organizations.  In 1926, the Union des Femmes Coloniales established the first lay housekeeping and social centers for women and girls in Leopoldville and Elisabethville.  In 1933, in collaboration with the State, Catholic missions sent the first social workers to the colony.  In the late 1940s, the city built the Foyer Social on Ave. Prince Baudouin in Dendale (now Commune Kasavubu). The American Baptist Mission established a Foyer Social in Kintambo in 1959.

Parc des Sports General Ermens was located at the Catholic St. Pierre mission on Ave. Baudouin.  In 1931, General Ermens, then Vice Governor of Congo-Kasai Province (of which Leopoldville was the capital), inaugurated Parc St. Pierre.  Father Raphael de la Kethulle de Ryhove had prepared the field on swampy ground there.  The priest, known as “Tata Raphael” to Kinois, introduced football to Congolese after WWI with the first matches played in front of Ste. Anne church (see Jan. 29, 2011).  In 1933, Tata Raphael made further improvements at St. Pierre, which would become Stade Reine Astrid, completed in 1937.


In 1942, plans were drawn up for an adjacent sports complex, to be named for now Vice Governor General Ermens.  Tata Raphael began construction the following year on the 20 acre plot and the complex was inaugurated on Easter 1946.  The Parc, which featured a swimming pool, 5 football fields, a covered viewing stand, 9 tennis courts, stables and other amenities was reserved for Congolese,  providing free admission. The complex was built with support from local firms, led by Joseph Rhodius of Texaf, Tata Raphael’s patron. In his remarks, Governor General Ryckmans lauded such efforts to improve the lives of the natives.  A Congolese translated the Governor’s Flemish speech into “un francais impeccable et d’une voix magnifiquement timbrée”.  In 2005, a reporter who  visited rehabilitation work on Stade Tata Raphael observed that the grounds of Parc Ermens were planted in vegetable gardens.
﻿ 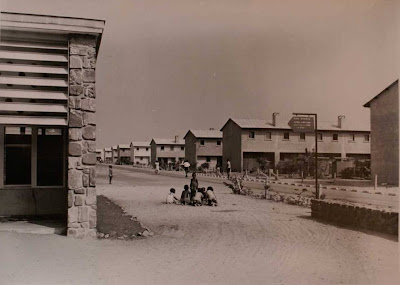 Bandalungwa was a planned residential development built by the Office des Cités Africains (OCA) in the hills above Kintambo in the 1950s.  When plans were announced in 1949, eleven thousand Congolese submitted applications for the new housing.  During King Baudouin’s visit in 1955 he inaugurated construction of the first two-story building.  In December that year, Bandalungwa became a Commune.


As I was preparing this posting, I found I did not have the all the photos I wanted for the Parc de Bock and Zoo sections.  I searched the web and came across a fairly new site called “Wikinshasa, l’Atlas de l’architecture et de paysage urbains” (http://www.wikinshasa.org/).  It was created at the request of the French Embassy in DRC and carried out by consulting firms in Europe in cooperation with the Bureau d'Etude, d'Aménagement et d'Urbanisme de Kinshasa (BEAU) and the Monuments Section of the l’Institut des musées nationaux du Congo (IMNC).  The project had the full support of local authorities and consequently was able to take contemporary photographs of buildings and other historic structures and spaces that are usually “interdit”.