To set the stage for this post, and to take you back to 1974,
click on the Tabu Ley link to "Kaful Mayay" above.
(apologies for the commercial, skip to the music)

The Muhammad Ali – George Foreman World Heavyweight Championship, later dubbed the “Rumble in the Jungle”, was held in Kinshasa October 29, 1974. The match took place in the Stade du 20 Mai (originally Stade Roi Baudouin, now Stade Tata Raphael) and the fight began at 4:00 am on October 30 to accommodate prime time TV in the US. 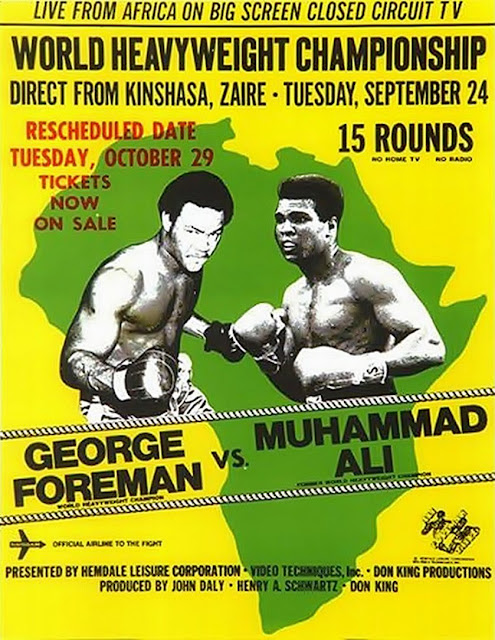 Originally scheduled for September 24, the fight was postponed until the end of October after George Foreman suffered a cut above his right eye in a training bout with his sparring partner.  As a high school teacher in Shaba (Katanga Province), I initially wondered if I might be able to attend the match and report back from vacation a couple weeks late, but when the event was postponed, I dutifully made my way back to Manono.


The event was a prestige extravaganza for President Mobutu, organized only months after his momentous speech at the UN General Assembly, as another way to put Zaire on the map.  A music festival called “Zaire 74” was held in September, featuring the locally popular James Brown, was well as others less well-known in Zaire, including B.B. King, Miriam Makeba, Bill Withers, Manu Dibango and Celia Cruz.
Zaireans were solid fans of Ali, and many still referred to him as “Cassius”.  From a technical standpoint, the younger Foreman - the reigning Heavyweight champ - was favored to win, but Ali pursued a strategy forcing Foreman to expend a lot of energy in punches that had little effect.  Finally in the 8th round, Ali landed a lightning series of blows that sent Foreman to the mat.  Foreman got up, but the referee called the match.  Some observers speculated that the fans would not have accepted a Foreman victory.
Earlier that year, popular musician Tabu Ley (Rochereau) released a song called “Kaful Mayay” which came to represent the spirit of the match.  Side two of the record included references to “Beta ye” (hit him) and Boma ye (kill him) in Lingala, and Zairean listeners across the country found in the tune a personal connection with the historic match.  In Manono, the week after the fight, bar patrons would break into spirited brawls whenever the song was played.