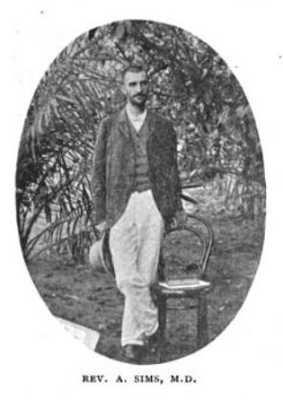 In December 1889, Dragutan Lerman, a Croatian explorer who had worked with Stanley when Sims first arrived in Congo, visited the station. Sims, he observed, had,

"arranged his station nicely, consisting of the main building occupied by Dr. Sims and surrounded by chalets for the guests (guest-room, warehouses and the kitchen).  On the right of the main building is the hospital, with a capacity of 20 beds. Opposite the hospital is the school where 20 pupils are learning how to read or write. This is all under Dr. Sims' control, who does it alone without anybody's help.  He works diligently the whole day, working for the well-being of humanity without discrimination of color."

In January 1891, Sims wrote to ABMU headquarters in Boston, “The Chapel is full each day of our own people, strangers, and the sick, so that I must set about building a new one of adobe brick when the weather permits.” The previous Christmas day, Sims had received reinforcements, Fritz and Boletta Gleichman.  They were, “delighted to find such a nice-looking station, good buildings, and well-laid-out grounds, good storehouses, schoolroom, and hospital and boy’s house, and so genial a man as Dr. Sims.” Gleichman immediately began looking for suitable land on which to build a house, which he estimated would cost about 30 or 40 Pounds. By March, he could report he’d been granted 150 meters of land next to Dr. Sims’ on which, “we intend to leave a space for a good chapel to be built in the future”.  The sale contract stipulated a payment of £21 to the State and £10 to the local Congolese authorities.


Gleichman became actively engaged in building his house, which involved felling giant Nlongwa (Hallea Stipulosa) hardwood trees from the swamp where Ave. du Montagne now runs behind the CBCO property.  Workers had already cut 7 Nlongwa, which yielded 44 large pieces of timber and Gleichman ordered another 12 to be taken down for lumber, noting, “It is a dreadful task to get out timber; the men sink in water and mud up to their hips with the heavy loads on their shoulders.”

The ABMU station now comprised fourteen buildings, all set on pilings, made of local timber including plank roofs, though Sims’ house had a corrugated iron roof and Gleichman planned the same.  The doctor estimated that the structures could last 15-20 years if cared for properly.  A better solution would be to build in brick, which was resistant to termites. Sims had decided to build a brick cook-house and was instructing the school students how to make and lay bricks. By July 1891, the students had made thousands of bricks, though Gleichman appealed to headquarters for a brick press costing £15 (half the cost of his land) to speed up the process and enhance the students’ skill training.   As Sims described,  “Thus order, tidiness, the use of the straight line, and industry have been taught without constraint, and I fully believe they have been happy”. Sims had built a kiln and was ready to fire floor and roofing tiles.
This effort produced a new pharmacy built of brick, and incorporating more skilled carpentry.  Sims was now ready to realize his dream from when he first came to the country, to gather together the people – the church – in a building he would help them to make.  The new structure begun in October 1891 would be 20 by 60 feet, built according to the best plans he could find adapted to the country. The design incorporated gothic windows and an altar and seating plan in the form of a cross.  When the building was completed, some 50 Congolese members began worshiping there.
Then in 1892, the Bateke under Chief Ngaliema, fed up with the exactions of the Congo Free State authorities, relocated en-masse across the Pool to Brazzaville.  Although the Bateke had not been particularly receptive to Sims and his colleagues’ evangelism, the departure of several thousand people significantly reduced opportunities for outreach and witness.  The Baptists could not close the station because it was critical as a transportation nexus for the mission stations upriver.  In addition, the school, run by the Gleichmans drew students from a wider region comprising eight ethnic groups.
Fritz Gleichman died suddenly in June 1893 and was buried behind the chapel, overlooking Ngaliema Bay.  His is the only grave on the compound.  Thomas Adams, a new missionary who had come to serve as evangelist on the “Henry Reed”, stepped in to support Dr. Sims.  He accompanied Mrs. Gleichman to Matadi and then returned to take over the schoolwork.  He remained Sims’ longest serving collaborator in Leopoldville.
In 1893, Sims built another brick building on the station.  Known in later years as “Sims’ House”, there is no mention of any residential construction in the “Baptist Missionary Monthly” during the 1893-94 period.  Frank Vincent, an American world-traveler and journalist visiting in September noted, “Among the buildings of the Mission is a neat little brick church, and, besides the dwelling for the future missionaries, an edifice is in course of erection which is to serve for a technical school.  Elsewhere the boys are now taught carpentry, and brick and tile making”.    Given the likelihood that facilities for Congolese were separated from the missionary residences and church situated above the river, this new technical school could have been the building, which in 1961 housed the first classes of the American School (See Jan. 13, 2011).
The work of managing such a large station was wearing on Sims.  He had to cope with receiving and shipping goods, tending to sick white people (in addition to his regular Congolese patients), hosting visitors, maintaining correspondence and reports. In early 1894, landowners were instructed to demonstrate “effective occupation” of their properties or risk losing them.  Sims organized planting thousands of fruit trees on the concession and was constructing a farm building for a few cows he had acquired.  A violent tornado in March 1895 caused extensive damage to ten buildings on the station, including the “handsome industrial school”.  The Congo Balolo Mission’s storehouse was lifted into the air and deposited some distance away without causing any injury.

A fundamental change in transportation technology was beginning to impact Leopoldville.  The railway approaching from Matadi was starting to draw curious young people away.  There were problems with porters who did not deliver their loads, and as a consequence, the mission lacked barter goods to exchange for food.  This affected the remuneration of preaching staff and was less of an incentive for children to attend school.  Still, Sims was upbeat about the coming of the train, as it would free large numbers of Congolese from the burden of portage – “100,000 loads a year” – and ease the travel of evangelists to reach distant villages.  In early March 1898, he observed with pleasure that the railway would arrive at Kinshasa in a week’s time (See Jan. 23, 2011).  The Leopoldville station was only 50 meters from the mission.
After the arrival of the railroad, Sims took his first furlough in twelve years and left the station under the supervision of the Congo Balolo Mission, which maintained a transport base there.  He visited American Baptist missions in Asia and addressed the American Baptist annual meeting in the US.  When he returned to Congo in October 1900, he was assigned to Matadi, where he resumed his role as multi-talented healer, preacher, treasurer, logistics master, transportation coordinator and host to weary travelers, serving in the port city until his retirement in 1922.  By mutual agreement, the station at Leopoldville and the “Henry Reed” were turned over to CBM, which serviced the upriver Baptist stations while Sims provided similar logistic support to CBM from Matadi.  The American Presbyterian Congo Mission operated the steamer “Lapsley” in support of its work in the Kasai region from the mission, represented locally by a Congolese named Mpeya. The CBM representative also managed the facilities as a guesthouse for transiting missionaries of all groups, who tended to be offended by the insalubrious and intemperate conditions in the local hotels.  One of the guests included William Henry Sheppard, an African American Presbyterian missionary, who stayed in Sims’ house in early 1909 while awaiting trial for libel against the Compagnie du Kasai rubber company.
In 1902, the first conference of protestant missions was held on the campus, and the meeting led to the formation of the Congo Protestant Council (now Eglise du Christ au Congo).  At the second meeting of the Council held in Leopoldville in 1904 and again in 1906, resolutions denouncing the Leopoldian regime’s barbaric treatment of the Congolese were issued.  Much of the documentation of these atrocities was compiled by British Consul, Roger Casement, who hired the “Henry Reed” for an extended fact-finding journey in June 1903.  At the January 1904 conference, ABFMS transferred the “Henry Reed” back to CBM, thanking its representative for his “kindness and hospitality” and “faithful care of the property”.


In 1912, ABFMS and CBM discussed the proposition that the former reopen the Leopoldville station with a resident missionary, as CBM wanted focus its resources on its mission field in Equateur Province.  Instead, missionaries from Sona Bata (90 kilometers west on the railway line) visited the church in Leopoldville regularly until Pastor Moses Kikwakwa was assigned in 1922. The “Henry Reed” was sold to Leopoldville businessman Emile Delcommune in 1916.  At the onset of the Depression, the old steamer was moored in Kinshasa when a severe windstorm sank it. Once Leopoldville became the capital of the colony in 1928, the Mission decided to relocate its administrative headquarters from Matadi to Leopoldville (See. Apr. 30, 2011).

SIMS CHAPEL THROUGH THE YEARS

A big thanks to NA and MG for help with the photos.