My family first moved to Kinshasa in 1956. Then called Leopoldville, the capital of the Belgian Congo was celebrating its 75th anniversary (See Mar. 5, 2011).  It was home to some 350,000 Congolese and another 20,000 Europeans. The city was about to be divided into 11 Communes (to allow for local elections in 1957), plus a vast Territoire Suburbain, and covered an area stretching from Limete and the Ndjili River in the east to Commune Ngaliema at the level of Ave de l’Ecole in the west.  The city was developing rapidly with high rise apartment buildings popping up in the downtown area and vast, planned residential communities for Congolese under construction by the Office des Cités Africains in Bandalungwa, Matete and Ndjili (See Sept. 30, 2011).  The city now comprises 21 Communes, having absorbed the Territoire Suburbain, and its population in excess of 10 million qualifies it as one of Africa’s seven megacities. It is also the largest Francophone city in the world. 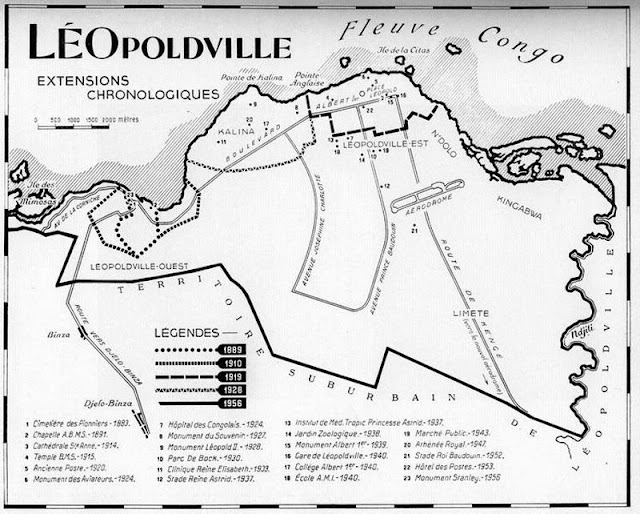 We’ve returned to Kinshasa for a two-year assignment. We have an apartment in one of the high-rise buildings that would have been under construction back in 1956, the heyday of “Tropical Modernism” (See Aug. 15, 2011). These relics of the colonial period are now dwarfed by a number of 25 and 30 story buildings going up all over Gombe Commune.  The real estate boom that began in the late 2000s is making its mark throughout the city, and not just in Gombe.    It is easy to be seduced by the crisp lines, the glass facades, the towering construction cranes and the Dubai-inspired designs. There is definitely pent up demand stemming from the declining years of the Mobutu era and the challenging beginnings of the Kabila regime.  But there remains a huge gap between the lifestyle enjoyed by the Congolese elite and the expatriate community and the majority of Kinois.
Kinshasa’s architectural heritage is under threat as villas and other structures on large lots are demolished for multi-story towers that occupy the entire parcel with virtually no setback.  While Boulevard du 30 Juin, Boulevard Lumumba, Ave. Liberation and other arteries have been rebuilt to handle large traffic volumes, many side streets which host these major traffic magnets are significantly congested throughout the day.  Many one and two story buildings of the colonial era are falling into disrepair, their shabby facades and rooflines just visible over security walls. Awkward adaptations further degrade their appearance.
One of my pastimes here has been to guide architectural history tours of the city (See Jan. 11, 2011).  Five years ago, I returned to Kinshasa for the 50th anniversary reunion of the American School of Kinshasa (TASOK).  Before my former classmates arrived, I retraced the route of the Historical and Architectural Heritage Tour I organized for the 2005 reunion and noted a number of changes at that time (See July 3, 2011).  Were I to organize the tour today, several stops would have to be introduced with, “On this site once stood…”,  The Texaf complex on Ave. Mondjiba, the first textile mill in the country, no longer produces its brightly colored cloth and has been converted into a sprawling real estate venture called Immotex, providing office space for NGOs, the UN and some embassy back offices. At Petit Pont at the curve of Ave. Justice, Chez Nicola restaurant, itself successor to the Auberge Petit Pont and its unique outdoor cinema, is now the site of a huge concrete and glass building whose owners are working to complete the street-side entrance and sidewalks so they can obtain the certificate of occupancy.
Closer to downtown the site of the Union Mission House and the BMS mission is transformed.  UMH is now the Residence Oasis and across the street, stand two new apartment blocs which just last week the complex received a sign proclaiming it as “The Peace”, commemorating BMS’ steamer “The Peace” (See Mar. 5, 2011). The Baptist mission, now the Communauté Baptiste de Fleuve Congo (CBFC) appears to have entered into what is euphemistically called “auto-financement” with a property developer.  One only hopes the church and its faithful will benefit.
Finally, the Gare Centrale, still the Gare Centrale, has gotten a face-lift. Covered with orange tiles and a faux tinted window, it has yet to reopen, but one can buy tickets for weekly express trains to Matadi in the courtyard.  Outside the Gare there used to be a bas-relief commemorating the 50th anniversary of the arrival of the railway in Kinshasa in 1898.  The sculpture was removed in 1971 and an artist has reproduced a Congolese version of the role Congolese played in the construction of the railroad. The original bas-relief has now been added to the collection of colonial statuary on display on the grounds of the National Museum at the base of Mont Ngaliema.
The Museum, located at the site of Stanley’s original encampment, would definitely be an addition to the Heritage Tour (See July 5, 2011).  Another development since my last visit is the return of Henry Stanley’s statue to a vertical position.  A “Friends of Stanley” group in UK financed the repair of the statue to attach it to the base from which it was sheered at the ankles in 1971. The collection of Congolese artifacts on display could benefit from improved presentation and better lighting.  In July, the South Korean Government began construction of a new National Museum on the Blvd. Triomphal.
An innovation in public transport is the small right-hand drive Toyotas and other brands imported from the Gulf States which ply the streets as shared taxis.  Called “ketches” (sneakers) they bring to mind bumper cars (with about as much attention to the rules of the road) and add significantly to the congestion.  On the other hand, the smaller number of passengers per vehicle has allowed the opening up of many new side routes, a boon for Kinshasa commuters. The Transco bus system, yet another attempt to provide public transport in the city, now have fare machines that accept pre-paid cards.
Another automotive innovation are the food trucks, which seem to do a brisk business in high traffic areas such as the Ministry of Foreign Affairs, the Supreme Court and at the Place des Evolués.  Finally, a number of intersections now have robots that regulate traffic.  Designed and built by a Congolese woman engineer and her organization, Women Technology, the machines are powered by solar panels atop their stands and can have cameras installed behind their sunglasses to record traffic violators.


Kinshasa is a city in constant change and evolution. It has always been a remarkable place to live.  I’m looking forward to being a part of it again.
Posted by Mwana Mboka at 6:29 AM