Leopoldville 1952 – Message in a Pepsi Bottle

While walking around the American School (TASOK) campus on Mont Ngaliema a few months ago, I turned up a glass bottle embedded in the soil.  It was a Pepsi-Cola bottle, but Pepsi-Cola is no longer produced in Kinshasa. It definitely ended up there after purchase at the student store, but when and how it found its way into the woods, intact, rather than as part of the trash piles tossed into the forest at different times, was intriguing.

A couple years ago, I researched a piece on the breweries in Kinshasa (June 12, 2015) and this find seemed to suggest the soft drink scene could use a look. Who knows what threads this inquiry might weave into a story? 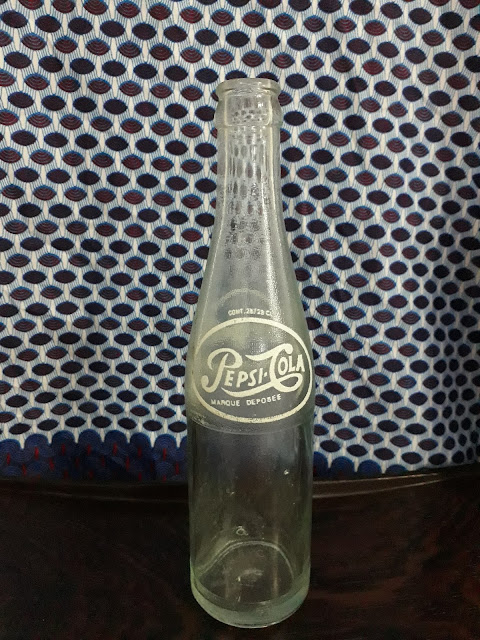 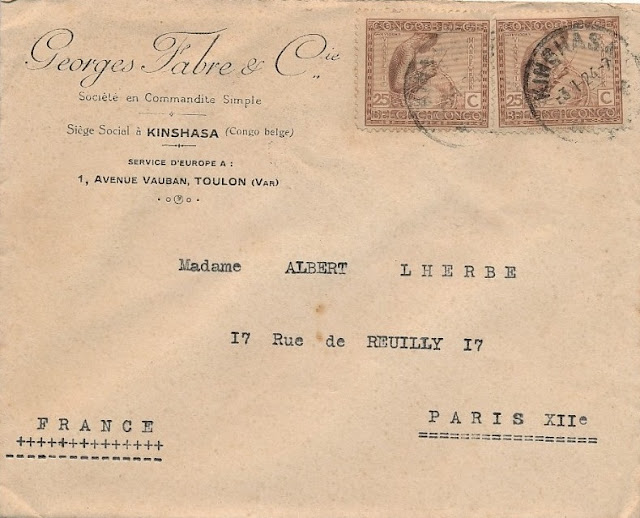 Prior to World War II, the Brasserie de Leopoldville produced bottled water and soft drinks for the local market.  In 1933, when Regideso was just beginning to provide piped, treated water to the municipality, a Brasserie advertisement urged people to drink the brewery’s bottled water, sodas and limonades to protect against epidemics.
In 1947, a bottle factory, “Bouteillerie de Leopoldville” was established by the Brasserie de Leopoldville with support from Heineken. The factory opened on Ave. du Camp Militaire (Ave Sgt. Moke) in November 1949.  The new company contracted with A.W. Schmid of Pittsburgh, Pa. to oversee the installation and launching of the glass-making operation.


In the 1950s, two American firms looked at the Congo market and decided to invest bigtime.  One was the US giant, Coca-Cola, which franchised its brand and secret recipe to the Ste. Congolaise des Boissons in 1950. The primary investor was the Sucrière du Bas Congo, the sugar plantation established at Moerbeke-Kwilu. Other investors included companies which were also part of the ultimate colonial holding company, the Société Générale de Belgique (SGB), including Profrigo, Cie. du Kasai and Belgo-Katanga, as well as an American firm called Industrial Sales Corp, the arm of the Compagnie du Congo pour le Commerce et l’Industrie in the US, another SGB holding. Maurice Michaux, who operated a major grocery and food importing company in Leopoldville also subscribed to several shares. The plant opened in 1956 at 28 Ave. Olsen (Kabasele Tshamala), the road to Ndolo Airport, not far from where the US Consulate was located at the time (See Jan. 29, 2011).
Rival US bottler, Pepsi Cola, conducted a prospecting survey in Congo in 1948 but opted initially to focus on East Africa.  It came to Congo in 1952 under the auspices of Maurice Alhadeff, a naturalized American citizen originally from Rhodes who moved to Leopoldville from Elisabethville (Lubumbashi) in 1949 where he ran a string of businesses.  In Leopoldville, he developed a number business interests, including ready-to-wear clothing affordable to the Congolese consumer (Aug. 5, 2011). Pepsi built its bottling plant on Ave. Charles De Gaulle (Ave du Commerce), in the main commercial district. Pepsi-Cola International launched a $75 million ad campaign in Africa at this time in which even local drums in Belgian Congo were tagged with the Pepsi logo.  In 1957, Pepsi’s CEO, Alfred Steele visited Africa, stopping in Leopoldville on the way to Johannesburg with his wife, the actress Joan Crawford. Alhadeff facilitated their visit and presented the couple with a wood carving from his extensive collection.  The following year, Alhadeff provided Pepsis for the kids at the Fourth of July party organized by American Men’s Club.
Another investor in the soft drink market was the Compagnie Coloniale Belge, also known as PEK, which operated a prestigious retail store on Ave Beernaert (See Nov. 9, 2011). This firm established a Canada Dry plant on Ave Olsen, just up the street from the Coca Cola bottler.  The Brasserie de Leopoldville, for its part, came out with a tangerine flavored drink called “Verigoud”.  The new Bracongo Brewery, established in 1954, came out with a line of soft drinks called “Bako” later “Djino” and now “World Cola”. 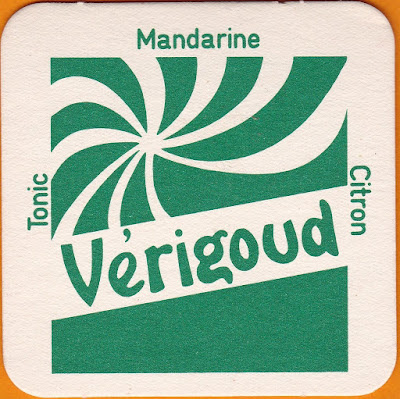 In addition to his business ventures, Maurice Alhadeff was an important patron of Congolese artists.  He provided aspiring carvers and painters with tools and materials and then purchased their work.  He advocated for a national museum and art institute to house the voluminous collection of traditional artifacts collected by the Musée de Vie Indigene (Sep. 12, 2011).  He supported, among others, Nkusu Felelo, Francois Thango and Bela.  In 1957, when the future President of the post-independence Senate, Isaac Kalonji, was preparing for an exposure trip to the United States, Alhadeff presented him with a painting by Albert Mongita to offer to President Eisenhower. Just prior to Independence in June 1960, my father met Alhadeff when he purchased of checked shirts and denim jeans for an Independence event and we received a mask and a carving from his extensive collection.
Shortly after Congo’s Independence, the U.S. State Department organized a good will cultural tour through West and Central Africa, headlining the jazz trumpeter Louis Armstrong and his All Stars band.  In 1957, Armstrong cancelled a tour sponsored by the State Department to the Soviet Union, faulting the Federal Government’s lack of response to Governor Orval Faubus’ defiance of the Supreme Court’s desegregation order in Arkansas.  Now with the “winds of change” bringing Independence to most of the colonial possessions on the continent, Armstrong accepted a joint sponsorship by the State Department and Pepsi Cola International.  Louis arrived in Leopoldville by ferry from Brazzaville on October 28, 1960 with his spouse Lucille.

Albert Mongita, now Director of Cultural Affairs for the Congolese government, met the Armstrongs in traditional costume at the ferry landing. Things were tense.  The country was in the midst of a constitutional crisis; President Kasavubu and Prime Minister Lumumba had sacked each in September and Joseph Mobutu had staged his first coup to neutralize the two.  The United Nations peace-keeping mission was trying to find its footing and a rash of strikes were crippling both the public and private sector. There were food shortages in the city and across the country, as well. Armstrong and his band claimed to have stopped the war for 24 hours – hyperbole perhaps -- but the concert in Stade Baudouin certainly did bring out the crowds from the city.
At the end of June 1961, Congo’s first anniversary of Independence, the Miss Leo 1961 pageant was organized in Parc De Bock across from the Zoo (Feb. 6, 2011). Bracongo Breweries (Polar) sponsored the Negro Success band, Pepsi sponsored the Jecokat orchestra while Canada Dry paid for the announcement in the Courier d’Afrique newspaper.


The following September, Pepsi Cola sponsored an exhibit of Congolese artists at its headquarters in New York City, which featured some of Alhadeff’s protégés, including six pieces by Francois Thango. Some critics charged that Alhadeff was only generating more knock-offs for the tourist trade, but international recognition of some of his artists demonstrated that finding talent required a large net.
After Independence, the soda bottlers continued to expand their production in response to the burgeoning Kinshasa market.  By 1970, the Coca Cola bottler recorded sales up 59% from the previous year.  The Pepsi plant, Boissons Nationales, had a daily production of 3,600 cases.  The Zairianization in November 1973 presented a problem for Pepsi.  Ostensibly an international corporation and exempt from the nationalization measures, it was a franchise of the Alhadeff interests. Alhadeff had died in 1972, but the family incorporated American Alhadeff in Delaware in an attempt to protect the family investments.
The independent bottlers were in the crux of market forces.  Canada Dry (Mineral Kin) does not appear to have survived the Zairianization in 1974. Coca-Cola, now Indus Boissons, was acquired by Bralima in 1992 and Pepsi’s Bonal in 1998.  The Coca-Cola brand is everywhere in Kinshasa, but Pepsi disappeared from the market (except for imported canned drinks). New players include Industrie des Boissons au Congo, operating out of the former Bata shoe factory on Ave. des Poids Lourds (the fate of that company another story in itself). In addition to producing the new Coke Zero on the local market, Bralima’s primary innovation is upscale marketing of the Vital’O grenadine soda.
I took my bottle to Boukin, the successor to the Bouteillerie de Leopoldville, to see if they could identify my bottle. The people I talked to were skeptical.  We only produce bottles for Bralima and each one should have the Heineken star on it, they said.  The most senior guy had worked for the company 20 years. Returning home, I found a diamond shape with a five-pointed star on the bottom of the bottle. Not discouraged, I found someone who could connect me with a former manager of the factory.  He explained that Boukin has operated uninterrupted since its founding and was purchased by Heineken in 1988.  During its 70-year history, Bouleo-Boukin produced all the glass beverage bottles in Kinshasa, including Pepsi and other competitors, as well as for the pharmaceutical industry.  My bottle would have been produced at Boukin and judging from the style of the logo, probably made in the 1960s.


Today, plastic competes with glass on the Kinshasa soft drink market and one can even buy Bralima beverages in glass bottles retail without a deposit. Sing the praises of returnables. Kinshasa’s storm drains and water channels choke with plastic detritus.