Kinshasa 2016 – Legacy of the Baobabs

One of Kinshasa’s sobriquets is “Kin Malebo”, named for its location on the “Pool Malebo” widening of the Congo River, but which in turn takes its name from the Lingala word for the Borassus, or Sugar Palm, which line the banks of the river.  Another remarkable tree that impressed early European visitors to the area was the baobab (Adansonia digitata).  These huge trees, which looked as though they had been upended with roots sticking up in the air, were a notable fixture in the Congolese settlements the explorers visited. Antoine Lumenganeso Kiobe, former Director of the Congolese National Archives, describes the remaining baobabs and other ancient trees in Kinshasa as witness to an era before the disruption and displacement of colonialism.


Along what is now the Port of Kinshasa was a series of Bateke villages set in groves of baobabs that impressed visitors. Capt. Henry Bailey, named Henry Stanley’s second Chef de Poste at Kinshasa in 1886, was entranced, “Kinshassa – what a beautiful place it looked in contrast to all the other stations I had seen on the Congo!  It is situated close to the water on sloping ground, in the midst of gigantic baobab trees, which suggest the idea of a park.” Early Belgian administrators named the original street along the bluff, Avenue des Baobabs (now Ave. Wagenias). 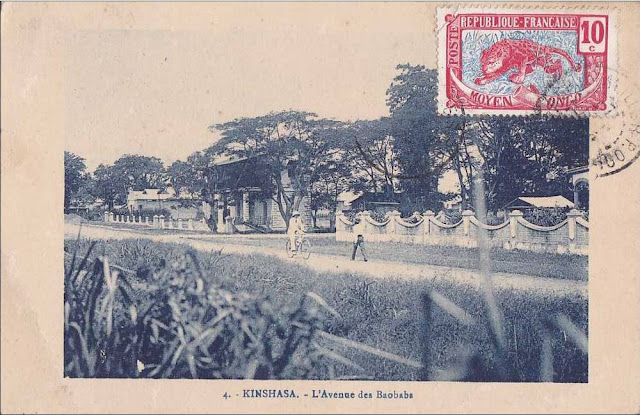 Later colonials were not so charitable.   In July 1891, Lt. Richard of the Force Publique dynamited a number of baobabs to create a military camp along what is now Avenue des Aviateurs, between Ave. du Port and Place de La Poste (See Mar. 13, 2011).  Still, in the early years, baobabs were ubiquitous in the rapidly developing commercial center that was Kinshasa.
Over time, as Kinshasa developed, the baobabs began to disappear.  Redevelopment of the Port in 1925 resulted in many being eliminated, except for one at the entrance to the port that remained until 1956.  When the Brasserie du Bas-Congo brewery was built in 1948, a baobab having a diameter of 5 meters was removed (See June 12, 2015).  During a heavy rainstorm in 1986, a baobab between the Hotel de Ville and African Lux toppled onto a parked car.
A few baobabs can still be found in Kinshasa.  One on Ave. de l’Avenir near CBCO in Commune de Ngaliema, attests to the original village of Chief Ngaliema who negotiated with Stanley and other arrivals in 1881 (See Jan. 9, 2011).  The spirit lives on in named restaurants such as Le Grand Baobab on Ave. Wagenia at the entrance to the Brazzaville ferry.