At the end of 1923, a group of Belgian investors led by the Banque de Bruxelles came together to build a brewery in Leopoldville.  Given the pervasiveness of the golden brew in Kinshasa today, it may seem curious that the city had already been established for forty years before this step was taken. However, the colonial model was based on production of raw materials by the colony and import of manufactured goods from the metropole, including beer.  Recall, as well, that the Charles Lejeune company’s first commercial transaction in Congo was to insure a shipment of beer from Bremen to Boma in 1886 (See Aug. 1, 2013).

Imported beer was expensive.  Postal agent Leon Tondeur reported in 1900 that a bottle selling for Fr.1 in Matadi cost three times that in Leopoldville.  When District Commissioner Costermans was assigned a warehouse manager who happened to be a brewer, he ordered equipment from Europe and installed a brewery opposite his office on Avenue du Roi Souverain (now the location of INBTP on the Matadi road in Commune de Ngaliema (See Feb. 20, 2011).  But, the local brew could never shake its disparaging moniker, “liquid manure”, and the operation folded after the second brewer died in February 1903.
A site for the new Brasserie de Leopoldville was located on the river at Ndolo and construction commenced in 1924.  December 27, 1926, the first bottle came off the production line, which had a capacity of 35,000 bottles per month.  When the plant became fully operational the following year, it produced 815,500 bottles of beer as well as 252,000 bottles of mineral water and 825 tons of ice. In 1928, beer production exceeded 1.1 million bottles, plus 720,000 bottles of water and over 2000T ice.  Plans were in the works to double output.
Inquiring minds might wonder, who was drinking all this beer? In 1928 there were about 2500 Europeans in Leopoldville and another 800 across the river in Brazzaville, or about one bottle per person daily. The development of European breweries in Congo and elsewhere in Africa was frequently justified on the basis of providing an alternative to locally distilled “lotoko” alcohol or palm wine.  At the time, Congolese were forbidden to buy alcohol. An ordinance in July 1911 prohibited the sale of alcohol to Congolese in Leopoldville between the hours of noon Saturday to Monday morning. It was not until July 1932 that Congolese were allowed sell alcohol to other Congolese, which led to the establishment of a number bars in the Cite (an informal color bar prevented Africans from purchasing in European establishments until the late 1950s). Palm wine was popular, though limited by lack of a significant number of palms that could be tapped within a radius of the city; allowing the naturally fermenting beverage to remain fresh (See Feb. 12, 2012).  Some enterprising Congolese in Bas-Congo shipped “bidons” of freshly tapped wine on the railroad, but this was not a significant source for a town of 40,000 in 1930. 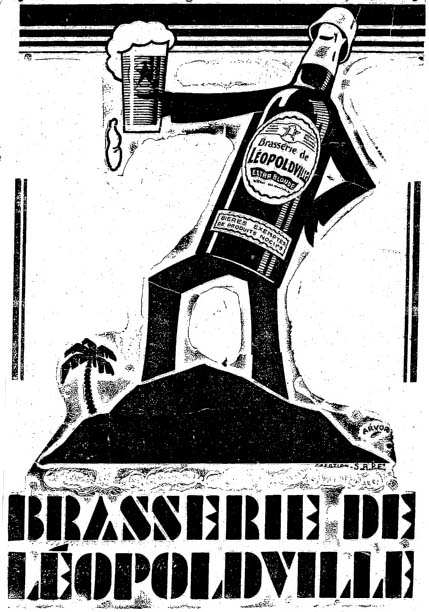 The Depression nearly sank the brewery.  Incomes and purchasing power declined and a significant number of its European clientele lost their jobs and were repatriated to Europe.  This loss of market no doubt contributed to the decision to allow the sale of beer to Congolese.  The company’s marketing campaign was lackluster and its less-than-premium product was priced at only 1 franc less (10 francs) than Beck's Beer imported from Germany.  During this time, Dutch brewer Heineken invested in the Brasserie de Leopoldville.
In 1933, a new brewer, Anselme Visez, was hired with a mandate to purchase new equipment to improve the quality of the beer.  The brewery introduced three grades of Primus and rolled out a new line of carbonated drinks.  Within a year, Visez claimed steadily increasing sales despite a declining market and stiff competition (such as Beck’s and Holsten which was marketed by Sedec). The Brewery hosted influential visitors to further get the word out.  The Touring Club du Congo Belge toured the facilities in September 1934, praising the ultra-modern equipment that precluded any contact between the workers’ hands and the liquid, a procedure “not to be scorned in Africa”.  Governor General Renard of French Equatorial Africa visited from Brazzaville in December 1934.  After inspecting grain storage facilities, fermentation tanks, the brewing hall, bottling line and sampling the product, he told Visez that his beer was better than the imports, and he should know, as he “consumes it regularly”. Throughout the 1930s, the brewery continued to expand production.  The company marketed Coolerator iceboxes, manufactured in Duluth, Minnesota, to enable customers to keep their beverages cold (with blocks of ice purchased from its ice plant, bien sur).
When world war broke out in 1940, Brasserie de Leopoldville joined the fight.  At the time, bottles were shipped in 24-count wooden crates enclosed in basketry.  The crates were so flimsy and prone to breakage that Otraco, the state shipping agency (See Oct. 31, 2011), refused to accept them as cargo. Citing the importance of maintaining the morale of up-river customers providing raw materials for the war, the brewery persuaded the authorities to declare beer part of the war effort.  The Brasserie also sent regular shipments of beer to the Allies in Nigeria.  In September 1943, the “New Columbia” left Matadi for Lagos with 600 tons of beer. Called “Congo juice” in the bars of Apapa, merchant seaman Harold Taylor of the “Thurland Castle” recalled loading a cargo of empty bottles destined for Matadi in December 1944 and returning with full ones.  In Leopoldville, consumption in licensed bars in the cité had increased to such an extent that missionaries pressured government to impose restrictions. This initiative was supported by certain industrial firms concerned about the impact of drinking on productivity.  The reduction measures enabled the brewery to meet its contract with Nigeria and keep Europeans in the bush well supplied.


Leopoldville’s Territorial Administrator assigned to the Cité, Emmanuel Cappelle, estimated sales there in 1946 at 500,000 bottles a month, worth 50 million francs per year, surpassing consumption of palm wine.  The Brasserie embarked on an upgrading and expansion program to serve this burgeoning Congolese market.  Architect Charles Van Nueten designed new buildings.  When completed in early 1948, management reported to shareholders that the product was esteemed for both quality and cost and held up to the competition. This allowed the company to raise prices for the first time since the Depression.  Beginning in 1947, the brewery allocated 2 million francs per year to a welfare fund, today the Fondation Bralima.  Anticipating electric power constraints of a growing capital, the company obtained a concession to a potential 200 HP hydroelectric site on the Ndjili River (which explains why the Quartier of Ndjili Brasserie in Ndjili Commune does not have a brewery).  In 1947, as well, construction began on a bottle factory, Bouteillerie de Leopoldville, on the Route du Camp Militaire (Sgt. Moke) in what is now Quartier Socimat.  The company also began building a brewery in Bukavu, the capital of Kivu Province that was developing into a region of white settlement similar to the Highlands in Kenya.
The Brasserie’s venture into new markets was likely driven by the arrival of a competitor in Leopoldville, the Brasserie du Bas-Congo.  Bracongo’s investors included the Belgian Brasserie de Haecht (controlled by retail and ranching firm SARMA) and two breweries recently established in Stanleyville (Kisangani) and Luluabourg (Kananga). It constructed its facility (also designed by Charles Van Nueten) near the mouth of the Funa River in Kingabwa, part of the rapidly developing industrial zone of Limete.  The construction forced the displacement of a Bateke fishing community. During excavation work, the discovery of a number of cowries indicated the presence of a prehistoric settlement here.  The Bracongo brewery was completed by Auxeltra-Beton in 1954. 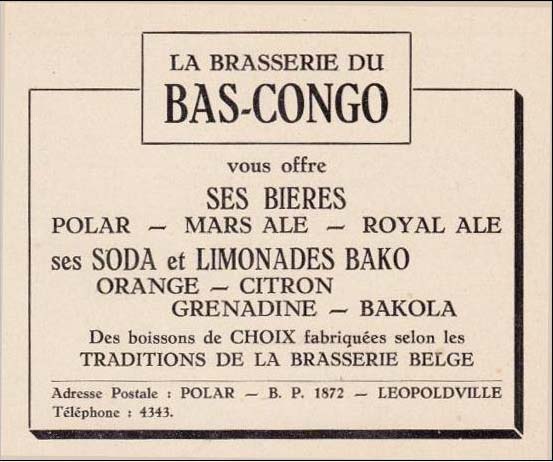 Heineken and the Brasserie de Leopoldville merged to form Brasseries Limonaderies et Malteries Africaines (Bralima) in 1957.  At Independence in 1960, Bralima operated breweries in Leopoldville, Bukavu, Stanleyville and Boma, as well as one in UN mandate territory of Ruanda-Urundi.  In 1959, Bracongo, along with affiliated breweries in Stanleyville, Luluabourg and Paulis, merged to form Unibra.
Sources: