Many versions of Kinshasa’s history (including the summary banner on this blog’s homepage) typically begin with Stanley’s arrival at Pool Malebo near the end of his cross-continental journey in 1877. Another narrative opens in 1881 when Stanley returned to the Pool under contract to Belgian King Leopold II and established a station at Kintambo to support exploration up-river.  Stanley encountered and described to the European world the existence of extensive settlement around the south bank of the river.  While Stanley’s journalistic opus contributed significantly to the early written history of Kinshasa, subsequent archeological work has confirmed the existence of numerous pre-historic settlements along the banks of the river (See Jan. 17, 2012).
Long before Stanley’s arrival, in fact, there had been a number of prior visits and written accounts by Europeans describing the political, socio-economic and settlement patterns at the Pool.  As early as 1652, Jerome de Montesarchio, a Capuchin monk from Mbanza Kongo near the Atlantic reached a village called Binza near the Pool and learned of a Chief Ngobila residing on the river who was a tributary of Chief Makoko.  The monk observed an active market served by long-distance traders and noted that the houses were made of grass.
In May 1698 another mission led by Fathers Luca da Caltanisetta and Marcellino d'Atri reached the Pool.  They claimed to have baptized Chief Makoko, but reported the existence of superior chief, Lemba, who was the “seigneur” over all chiefs in the area. In 1705 other Capuchins returned, and reported a settlement they called “Etchintambo”.
The place names in these historical records vary considerably, partly due to the fact that there was not yet consensus on the European spelling of African words and each observer and informant drew upon their cultural and linguistic traditions to transcribe the words they heard.  For instance, Ngobila, one of the Bateke chiefs, was also recorded as, Ntsulu, Chuvila, Ntshuvia, Nchuvira, Nchuvila, Nchubila, Tchoubila, Tsobila, Subila.  The early visitors also used the chief’s title (Ntshuvia) rather than name (Nkunda)
No further written records describe the settlements on the Pool prior to Stanley’s arrival, but it is evident that during the 18th and 19th Centuries, the Humbu and Teke had developed extensive trading relations with the European entrepots on the estuary of the Congo River at Boma, Banana, Noqui, and Sao Antonio do Zaire.  These links were facilitated by intermediary exchanges with Bakongo traders.

The original residents of the south bank of the river, the Bahumbu, occupied numerous small villages of 100-300 persons, each under its own chief. In contrast to the Bateke and other migrants involved in long-distance trade, the Bahumbu were farmers, producing manioc, sweet potatoes, corn, bananas and pineapples and engaged in fishing to provide protein in their diet.  Charles Liebrechts, Chief of Leopoldville Station from 1887-1889, further observed that they were only armed with flintlock guns, as opposed to more modern rifles available to the Bateke traders. (Bontinck’83:)


When Stanley first arrived at the Pool in 1877 at the end of his epic transcontinental journey, he described the presence of two settlements on the south bank, Ntamo and Nshasa, based on his encounter with two Bateke Chiefs who came across the river to meet him.  It wasn’t until Stanley returned to the Congo to establish what became Leopold II’s Congo Free State and made his way to the Pool in 1880 that he understood that the Bahumbu, not the Bateke, were the actual proprietors of the lands along the river and that there were numerous other villages along the river and inland, in addition to Ntamo and Nshasa.

Meanwhile, two British Baptist missionaries, Bentley and Crudgington, were making their way up from the river mouth, following Stanley’s rudimentary caravan road and then forging on ahead, reaching the Pool in January 1881 (See Mar. 5, 2011). They spent the night at Kintambo, then walked to Kinshasa the next day.  They did not observe any villages along the way, but on arrival at Kinshasa were challenged by Africans in French naval uniforms who claimed a concession from Makoko.  This confrontation, combined with a generally unwelcome reception from the local population, prompted the missionaries to return to Kintambo.
Stanley’s rival, French explorer Savorgnan de Brazza had, in fact, reached the Pool via contemporary Gabon the previous September, signed a treaty with Chief Makoko on the north side of the river (now Congo Brazzaville), and left a small military detachment under Senegalese Sgt. Malamine at Nshasa, Bateke Chief Ntsulu’s village, on the opposite bank.  The advent of the two European powers introduced a new dynamic to the local political equation.


When Stanley finally completed his road to the Pool in July 1881, he needed to establish a base of operations to support further exploration upriver.  He turned first to Chief Ngaliema at Kintambo, who he met on his earlier voyage.  Kintambo was a Bahumbu settlement but under the control of Ngaliema, a Muteke from the north side of the Pool. The site was an important market for trade in ivory.  Initially, Ngaliema was resistant to Stanley’s offer, but when he learned that Chief Ntsulu of Kinshasa had offered a site along what is now the main port along Ave. des Wagenias, came back with a counter offer and Stanley established his first station at Ngaliema where Chanic and the National Museum are today (See Mar. 13, 2011).  Nonetheless, in a ceremony confirming the concession for Stanley’s station in December 1881, Chief Makoko of Lemba made very clear that the Bahumbu were the proprietors of the land on the Pool.
About this time, Bentley and Crudgington visited Lemba’s town and observed,

“The houses were built in a different manner from those we had hitherto seen.  Instead of the sharp, slanting roof with an eave, the houses had semi-circular roofs which were continuous with the side of the house. They were thatched with grass, but the seed-stem formed the outer layer, giving the house an appearance as though covered with fur”.


The positive relationship with the new European arrivals did not last long. By 1885, the Makoko was starting to block caravans of food destined to supply the European station at Kintambo, now known as Leopoldville.  In January 1886, Congo Free State troops from Kinshasa attacked, looted and partially burned Makoko’s village at Lemba. Ngaliema immediately confirmed his loyalty to the Europeans and offered to serve as a mediator with the Makoko.  This initiative did not bear fruit and eventually, an agreement was reached at Kinshasa brokered by Chief Kimpe. 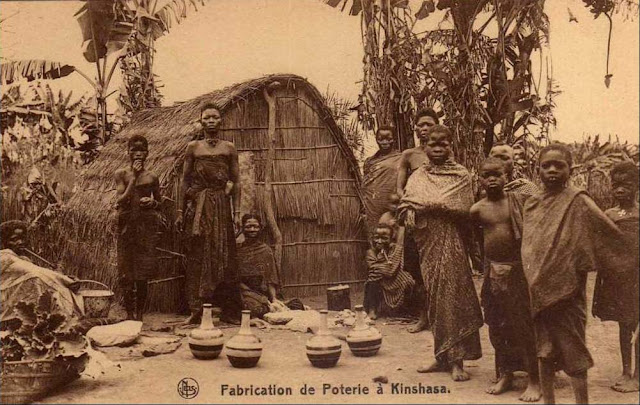 In June of following year, Baptist missionary Holman Bentley visited Makoko’s village at Lemba.  He followed a well-built road leading south about 9 kilometers from his mission station at Kinshasa. (See Jan. 14, 2017) Received by the Makoko, he toured the village with one of the Chief’s sons, observing that it was an extensive settlement comprising numerous groupings of four to eight houses separated by bush.  The Makoko’s compound comprised 12 dwellings, one for each of his wives.  Bentley had a number of cordial discussions with the Chief, gaining an understanding of the history of the Bahumbu on the Pool. The next day, Bentley continued east to the Ndjili river and the village of Ngwa Lulala. From there he continued to Kimbangu (Masina) and finally Mikunga.
Nonetheless, and notwithstanding other visits from European authorities, relations with the Humbu chief remained strained and in 1888 the colonials burned Lemba to the ground.  The Makoko relocated to Lumeta (pronounced Limete in Lingala) one kilometer up the Ndjili River from Masina.  The Makoko died in 1907.  In that year the colonial authorities created a Chefferie called Masina, comprising the villages of Limete, Kingasani and Lemba.  It will be recalled that Ngaliema, chafing under colonial rule, relocated to the Brazzaville side of the Pool with his Bateke followers in 1891. The same year, Chief Bankwa of Ndolo had also moved to the northern side of the Pool.  In 1907, Chief Lekibu of Kingabwa (Ndolo) moved his village further up the river due to pressure from the growing European town of Kinshasa.  The site is now occupied by the SEP Congo fuel tanks behind the rail yards.
Across Kinshasa today, local place names such as Binza, Kingabwa, Kinshasa, Kintambo, Lemba, Limete, Masina, Mikonga, Ndjili, Ndolo, Ngaliema and Nsele attest to these pre-colonial settlements.
Sources: