On the morning of August 3, 1914, the German community of Kinshasa, as well as several hundred specially-recruited able-bodied Congolese, left port for the Sangha River, the main artery serving eastern Kamerun, then a German colony.  The mission of the “Dongo”, a steamer of the Kamerun Schiffahrt Gesellschaft company, was to link up with German forces and ships located on the Sangha and return in force to seize Kinshasa and Brazzaville.  Unfortunately for German aspirations, French troops out of Brazzaville aboard the “Albert Dolisie” were on their heels and by August 6 the “Dongo” was captured and German plans to control the upper Congo and Ubangi Rivers were dreams.  The Great War had come to Leopoldville.
Authorities in Leopoldville and the colonial capital at Boma did not learn of the formal declaration of war in Europe until August 5th.  The Belgian government authorized aggressive action against the Germans and on August 28, Georges Moulaert, District Commissioner in Leopoldville, seized the German commercial vessels “Congo” and “Lobaye” (renamed Liege and Haelen, respectively).
The first German attack against the colony, however, took place in the east on Lake Tanganika when an armed German steamer out of Kigoma attacked the “Alexandre Delcommune” operating from Mtoa north of contemporary Kalemie.  District Commissioner Moulaert dispatched the “Netta”, a fast riverboat (18 knots) that had just been delivered to Leopoldville for service on the upper river.  Equipped with heavy weapons when launched on the Lake, the “Netta” would help turn the tide against the Germans and ultimately secure a victory for the Force Publique at Tabora in contemporary central Tanzania.  The epic story of the naval battle on the Lake is generally accepted as the inspiration for the novel and movie The African Queen though there is some academic disagreement.
German firms had been present at Stanley-Pool since the turn of the century, assuring the port-rail link between up-river commerce and the ships of the Hamburg-based Woermann Line, which called regularly at the seaports of Boma and Matadi.  The Belgian Société Anonyme Belge du Haut-Congo (S.A.B.) invested in the Sud-Kamerun company and allowed the new firm use of its facilities at Kinshasa (See Mar. 13, 2011).  After 1912, when Germany extended its colonial holdings in Cameroun to reach the Sangha, the Kamerun Schiffahrt was created, absorbing the Sud-Kamerun fleet.  The following year, the French, Belgians and Germans formed a cartel in which the Germans obtained a monopoly on traffic between Kinshasa and the Sangha, the French on the Ubangi River and the Belgians the Congo and its tributaries.
At the end of September 1914, the French authorities in Brazzaville requested Belgian assistance in putting down the remaining German positions on the Sangha.  The Belgians armed one of its newest steamers, the SS “Luxembourg”, with machine guns and a 47 mm Nordenfelt canon, and dispatched it to the front with a detachment of 60 Congolese troops under Lt. Bal.  The Luxembourg returned to Kinshasa with wounded at the beginning of November, and then in December led a 6-vessel fleet back up to the Sangha where the German troops were vanquished in the last days before Christmas. The focus of the War in Belgian Africa now turned to Lake Tanganika.
The “Netta” was delivered to Kinshasa by Robert Goldschmidt, a Belgian engineer who was something of a techie of his era.  In 1908, he had prepared designs for wood-burning steam vehicles for transport in the Congo and in 1912 began construction of a wireless telegraph network linking the major cities of the Colony. On his trip to Congo at the end of June 1914, he brought the first Ford Model T ever introduced to Congo.  The car was a sensation!  Leopoldville was only 10 minutes from Kinshasa.  After the War, when the Protestant missions were planning the Union Mission Hostel (UMH, now CAP) in 1920 (See Mar. 27, 2011), the necessity of a Ford was written into the terms of reference for the new facility.
On the eve of the War, the Belgian government decided against Commissioner Moulaert’s recommendation to transfer the colonial capital from Boma to Leopoldville (See Jan. 23, 2011).  However, there were other changes in the administrative structure of the colony.  Leopoldville was named the capital of a new province, Congo-Kasai, while Kinshasa became the seat of the Territoire in the new District du Moyen Congo.  In March 1919 Kinshasa became the seat of this District.
Kinshasa was beginning to grow and outpace Leopoldville.  American ornithologist, James Chapin, returning to Kinshasa in December 1914 after 4 years on an expedition for the American Museum of Natural History observed,

Kinshassa has grown amazingly.  Where formerly there was almost nothing but a state post and a depot of the SAB there is now a large and important town, with hotels, a bank, quantities of magazines, steamboats and a European barber.  To the north side are the very extensive installations of the “Compagnie Mbila” (Lever Bros) and back inland, a little further away, the wireless station.  Leopoldville shows but slight signs of growth in comparison.

Lever Brothers, known informally as Compagnie Mbila (for the oil palm), was bringing its palm oil operation on line, with Kinshasa as the base for five huge palm oil plantations established on the Congo River and its tributaries.  The palm oil storage facilities of the Huileries du Congo Belge and attendant installations were built on land purchased from the Baptist Mission Society and NAHV to the west of downtown where Marsavco is today.
During the war, the grand Hotel A.B.C. opened, construction began on the Post Office and the BMS Protestant chapel as well as the Catholic Church of Ste. Anne were built.
The Banque du Congo Belge opened its new colonial headquarters in Kinshasa during the War, as well. The relocation acknowledged the increasing importance of the Leopoldville-Kinshasa-Ndolo agglomeration over the colonial capital at Boma.  The bank was a private firm that also served as the central bank of the colony.  Founded in 1909, it opened its first branch in Kinshasa in August 1910 opposite the train station (Place Braconnier).  In 1911 when Albert Thys visited Kinshasa to select a site for the Hotel ABC, he also reserved a one-hectare site across Ave. Baobabs (later Hauzeur, now Wagenia) for the new Bank.  The land claim was approved in May 1912 and construction of the Mediterranean-style building would have commenced about the same time as did the ABC.
An oil pipeline was completed from Matadi in 1914. The idea was to reduce dependence on fuel wood to power the steamer fleet, but the cost of the imported fuel, notwithstanding the inconvenience of frequent stops to resupply the steamers with wood, limited the utility of fuel powered engines until after Second World War.  Petro-Congo’s depot was located upstream from the Citas landing (where Ave. des Industries begins today). 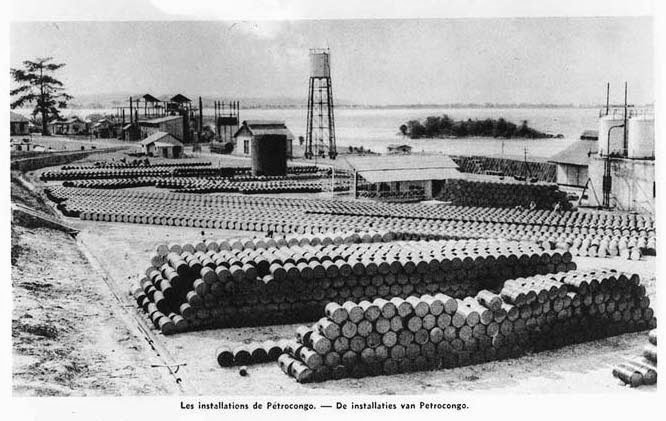 Kinshasa had already displaced Leopoldville as the main river port and construction of an expanded port was approved in 1913.  But in March 1914, the Colonial Ministry decided not to proceed with construction, though it awarded prizes to the designers. Some minor, additional assessments were conducted and most of the commerce continued to be handled by private landings such as Citas and NAHV.  However, by early 1917 after the steamer “Elisabethville” was sunk off the French coast, it became necessary to stockpile 30,000 tons of colonial exports in Kinshasa to avoid overwhelming Matadi.  Clearly upgraded port facilities at Kinshasa would be a post-war priority.

Kinshasa Then and Now - The District Building