When Leopoldville was established in 1881 -- and Kinshasa two years later -- the usual mode of transport was on foot.  Indeed, Stanley’s Caravan Road from Matadi was a pedestrian path and all cargo was transported on the backs of gangs of porters – typically in 60 pound loads.  The scale of the two original communities lent itself to walking and a 7 kilometer path roughly following Aves. Mondjiba, Justice and Lukusa connected the Leopoldville to Kinshasa.  The other option for travel between the two communities was by canoe across Ngaliema Bay, though one of Stanley’s officers, Kalina, drowned when his canoe overturned December 23, 1882, becoming the first European to die in Kinshasa.  During the colonial period, the area of the current Commune de la Gombe was known as Kalina.

March 15, 1898, the first train from Matadi arrived at Ndolo on the newly completed Chemin de Fer du Congo railway.  On May 1st, when the line began provisional operation, the rails were extended to Leopoldville.  In 1900, the train between Leopoldville and Kinshasa only operated every other day.  Things did not change much for the next decade.  When ornithologist James Chapin transited the city for the American Museum of Natural History Congo Expedition in July 1909, he walked from Leopoldville (he was staying ABFMS/CBCO station) to Kinshasa.


But circumstances were changing.  The first Ford appeared on the city streets in 1914, causing a “sensation”.  Another form of transport was the “pousse-pousse”, a rickshaw-like unicycle with handles front and rear for the pushers. When Colonial Magistrate Henri Segaert passed through Kinshasa in March 1918, “pousse-pousse” taxis awaited the passengers to whisk them in minutes from the port to the Hotel A.B.C. (the March 27, 2011 post shows a “pousse-pousse” in front of the Hotel). Though “pousse-pousse” were eventually banned, they were restored during World War II as a fuel-saving measure, but never really came back in the boom years of the post-war period. 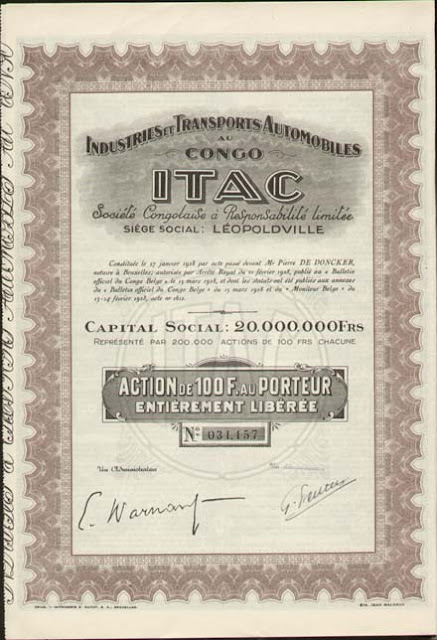 The Comité Urbain considered a proposal by entrepreneurs Promontorio and Morelle in June 1924 to operate a public transport service linking the railway stations at Kinshasa and Kalina with Hotel A.B.C.  In February 1928, the Compagnie Industries et Transports Automobiles au Congo (ITAC) (See June 9, 2014) was created by the SOCOMA company to provide the first bus service in the city.  Three buses connected the port and railway station with the Hotel A.B.C. (See Jan. 6, 2011, Mar. 27, 2011).

Bicycles were becoming an attractive mode of transport, accessible even to Congolese.  In 1929, Cycles Orban was founded and in 1932, Orban opened the first bicycle assembly plant in Kinshasa.  Four years later, A. Faniel opened another bicycle plant in Leopoldville.  In that same year, Orban began to market his bicycles under the Nabro brand.  In 1937 another competitor, Jacques Kaiser, launched his firm on the Leopoldville market.  Bicycle ownership among Congolese was growing exponentially. In 1944, Leopoldville had 5,300 registered bicycles – by 1956, these numbered 50,000.


The first taxis, provided by Pires, began circulating in 1940.  In 1948, Constantine Pipinis, a Greek entrepreneur, launched the first public transport for Congolese.  Called "Fula Fulas", these were converted trucks with bench seats along the sides.  This was also made more feasible by the city government paving several of the main streets in the cité, including Ave. Baudouin and Kasai.  Kinois were pleased with the speed with which they could cover distances, but were crammed together like sardines. In the same year, the Ministry of Colonies sent a consultant to Leopoldville to assess the transportation problems of the city.
The corporate sector was also concerned about the transportation situation.  In 1951, Martin Thèves of the Cominiére holding company visited the capital and commented on the productivity implications associated with the lack of public transport; Congolese who came to work on foot were too tired to work. A study in 1952 recommended placing 100 wheeled vehicles on the streets. The issue was resolved in mid-1954 following an accord between the Comité Urbain and Cominière’s Colectric to establish the Transports en Commun de Leopoldville (TCL). Colectric (now SNEL) was established in 1923 to provide electric power to the city and later the distribution of electricity from the Sanga and Zongo dams in Bas-Congo.  The state held 54% of the shares and transport companies OTRACO and Cominiere’s Vicicongo railway were involved, but the choice of the electricity company was explained by the proposed transport solution – electric buses.  TCL ordered 12 “gyrobuses” from the Swiss Oerlikon company, a new technology that had only been introduced in the Swiss town of Yverdon in 1953.
Electric power was generated from a fly-wheel mechanism en route, but required recharging every 5 kilometers from an overhead 3-phase pole.  When the 20 kilometer gyrobus network was inaugurated by Colonial Minister Buisseret in July 1955, it was the largest in the world (See Jan. 9, 2011 -- gyrobus fleet at the Gare Central).  TCL also acquired 37 diesel buses, of which 27 were equipped with articulated trailers and by 1956 carried 10 million passengers.  The “gyrobuses” proved challenging to operate.  Recharging took several minutes and drivers tended to deviate from established routes on rough roads, increasing wear and tear.  The “gyrobuses” were phased out in 1959.  At Independence in 1960 TCL operated 200 buses (mostly Belgian-made Van Hool models) and carried 100 million passengers on 18 lines.


The first taxi-buses, now the mainstay of Kinshasa’s urban transport system, first appeared on city streets in 1958. For a number of years VW Combis were the preferred model. After Independence, a new taxi company began operating blue Peugeot 403 sedans with a yellow stripe along the side.  Orban and Unilever’s retail arm SEDEC created the Cyclor bicycle factory in the industrial suburb of Limete in 1965.  The plant was expanded in 1967, but bicycles had become an endangered species and virtually disappeared as a mode of transport on Kinshasa’s streets by the end of the decade.

Like most parastatals in Congo, TCL suffered from poor management and lack of capital and spare parts after Independence.  At the same time, the bus company shared the same problems of overcrowding and wear and tear that affected public transit operators worldwide.  In May 1967, 15 new buses were purchased by the State.  The following year, when the Leyland assembly plant was opened, the bus company ordered 75 buses.  But there was also competition.  The Société de Transports de Kinshasa (STK) was created in September by one of Mobutu’s cronies, Poto Galo, the local representative of Mercedes Benz.  The thirty Mercedes buses that took to the streets in 1969 were slightly more expensive than TCK, charging 5 makuta per trip. In the early 1970s, the company began to decline such that it only operated two lines in 1979 and completely folded in 1982.
Pickup truck taxi-buses known as “kimalu-malu” were introduced in 1973, typically linking the rural zones with the inner city taxi-buses.  At the same time, TCK was restructured as the Office des Transports en Commun au Zaire (OTCZ), in line with the Zairianization of the economy Mobutu ordered at the end of the year. By 1978, the Bureau d’Etudes d’Amenagements Urbains (supported by French development assistance) estimated that Kinshasa would require 1600 buses by 1990. In May of the following year, the Société des Transports Zaïrois (SOTRAZ) was created with investment from the Zairian government, the mining conglomerate SOZACOM and French automaker Renault.  This was followed by City-Cars (with Belgian private investment) and City-Train (public -- see photo Feb. 20, 2011) and the ephemeral Société des Transports Zairo-Marocains (mixed capital) established in 1989.
None of these initiatives was able to meet either the demand or maintain its fleet over the long term. By the time the Kabila and the AFDL ousted Mobutu in 1997, public transport remained the province of small, private taxi-bus operators, typically running used vehicles imported from Europe, often still sporting corporate logos of their earlier life. Other companies employed yellow school buses from America.  The new authorities attempted to revive the public transport system, supporting City-Train’s acquisition of Volvo buses.  In December 2002, a new authority was proposed to combine road and rail services under the Régie Autonome des Transports Urbains de Kinshasa (RATUK).  This would take over Onatra’s derelict rail service and the City-Train bus lines.
For its part, City-Train was trying to recover outstanding debts from creditors and get its fleet back on the road.  In September 2003, the company received credits to purchase Pegaso buses in Europe.  The following month, Kinshasa Governor Nku met with bus investors. In March 2004, the Société de Transport Urbain du Congo (STUC) was created, with an expected start-up fleet of 60 reconditioned Belgian and Spanish buses.  Transport Minister Olengakhoy received 4 Belgian Van Hool buses in May 2004.  In September 2005 STUC was operating 10 buses on the Gare-Kingasani line.  City Hall mandated a uniform blue and yellow color scheme for all buses and taxis in October 2007, in an attempt to bring some consistency to the ragtag fleet of used, imported vehicles.
Long-suffering Kinois put up with regular taxi-bus strikes (when Police became too exigent) and grappling with how to choose approaching vehicles which did not display the route they were plying.  Both parties developed a sign language; a flat hand extended up means down the Boulevard, a flat hand down means Ave. Liberation (24 Novembre), a thumb jerked over the shoulder means a perpendicular street (as in Liberation from the Boulevard), the index finger revolved in a downward circle indicating Rond Point Victoire (or other nearby roundabout) as the desired destination.
Meanwhile, Onatra was struggling with the urban rail service, having closed the Kintambo Magasins-Kinsuka line in early 2002.  The rolling stock was ancient, typically overloaded and less than 25% of passengers paid their fares.   Onatra service was on again off again.  In June 2011 a new Chemin de Fer Inter-Urbain was launched running from the Gare Centrale through Matete and Kisenso to Kasangulu.  Belgian Cooperation donated 4 locomotives and 30 cars to the Société Commercial des Transports et des Ports (SCTP), a new parastatal which replaced ONATRA.  Residents of the isolated Communes on the eastern side of the city were enthusiastic.  A well-run urban rail system could help alleviate Kinshasa’s chaotic traffic patterns.